Five years after he was nominated to the Supreme Court[1], Merrick Garland, the chief judge of the U.S. Court of Appeals for the District of Columbia Circuit, is President-elect Biden’s choice to lead the Justice Department[2] as the next attorney general.

Previously, Biden has vowed that the Justice Department under his administration will be “totally independent[3]” of him. He has stated that “the person or persons I pick to run[4] that department are going to be people who are going to have the independent capacity to decide who gets prosecuted and who doesn’t.”

Given Obama’s failed push to appoint Garland[5] to the Supreme Court, and given Biden’s warm relationship[6] with Obama, it is probably no coincidence that Garland was chosen to serve as Biden’s attorney general. Despite claims that Garland will act independently, history suggests that this is unlikely to be the case.

A brief history of the attorney general 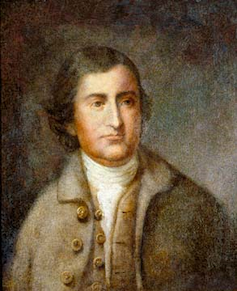 Edmund Jennings Randolph, the first attorney general of the United States. Virginia Museum of History and Culture, via Wikimedia Commons[7]

Congress created the position with the Judiciary Act of 1789[9], which is the same act that organized the Supreme Court. This connection may indicate that the founders intended for the position to be a part of the judicial branch. Indeed, original drafts[10] of the Judiciary Act empowered the Supreme Court to select the attorney general, as opposed to the president. This suggests that the founders did not intend for attorneys general to serve at the pleasure of the president[11], as is typical of Cabinet-level positions in the executive branch.

Due to disagreements among the founders, the specifics of the attorney general selection process ended up being entirely omitted from the final version of the Judiciary Act. This provided an opening for the first president – George Washington – to fill that void by assuming the power to nominate the attorney general[12], then asking for Senate approval. This process has since become the norm[13].

Nevertheless, in his writings, Thomas Jefferson referred to this new position as the “Attorney General for the Supreme court[14].” Moreover, early attorneys general shared both offices and budgets with the judicial branch as opposed to the executive branch. Eventually, the Justice Department was established[15] in 1870, and the attorney general was designated as its head, thereby codifying the position’s place within the executive branch. 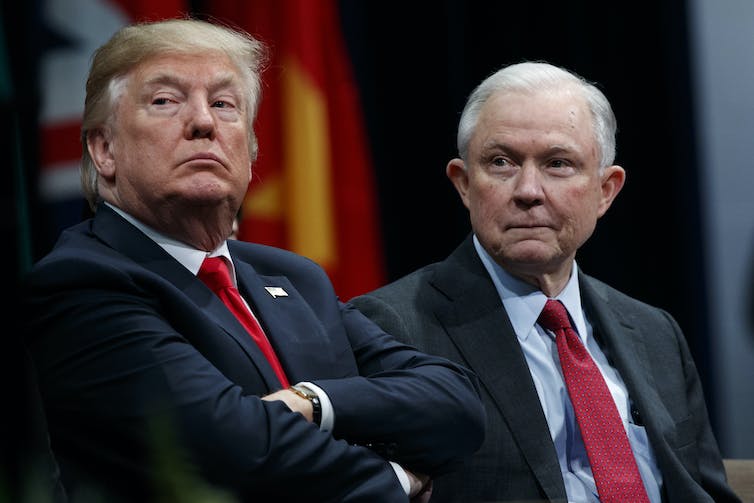 A downside to presidential influence

Trump, for instance, admitted to firing Attorney General Jeff Sessions[19] in 2018, whom he had “loyally” appointed the year before, for failing to have the “courage to stare down & end the phony Russia Witch Hunt[20].”

My own research has found that instances of abuse of power are more common[21] in situations where the president and the attorney general are political allies. Just in the last year of Attorney General William Barr’s tenure, there have been many such examples.

In February 2020, four veteran Justice Department prosecutors[22] recommended that Roger Stone – a Trump confidant who was found guilty[23] of lying to Congress and witness-tampering – be sentenced to between seven and nine years in federal prison. After Trump tweeted that he “[c]annot allow this miscarriage of justice[24],” Barr overruled the prosecutors and recommended a shorter prison sentence[25].

Barr’s willingness to “give preferential treatment to a close associate of the President[26]” prompted a bipartisan group of more than 2,500 former Justice Department officials from both Republican and Democratic administrations to sign an open letter urging him to resign.

In May, Barr – a longtime critic[27] of Robert Mueller’s investigation of possible collusion between the Trump campaign and the Russian government – had the Justice Department drop all charges[28] against former National Security Advisor Michael Flynn, who had previously pleaded guilty[29] to lying to the FBI about his contacts with Russians. Once again, large numbers of former Justice Department officials called for Barr’s resignation[30].

In September, Barr moved to replace Trump’s private legal team with Justice Department lawyers to defend the president in a defamation lawsuit[31] related to an alleged sexual assault from the 1990s. This move would have effectively meant that taxpayers were paying Trump’s legal defense[32] and would have been liable for any monetary damages in the event of the president’s defeat. A federal judge later rejected the Justice Department’s request[33] to pursue this strategy arguing that “the allegations have no relationship to the official business of the United States.” 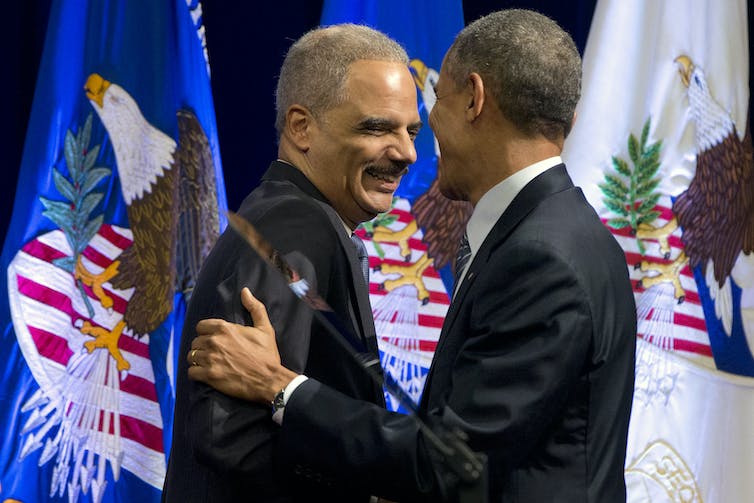 Barr is not the first loyalist[35] to serve as attorney general, and such appointments are not unique to Republican presidents[36].

Eric Holder – the first attorney general Obama appointed – publicly proclaimed he would be the president’s “wingman[37].” Holder ended up becoming the first attorney general to be held in both criminal and civil contempt of Congress[38] for failing to turn over documents related to the Fast and Furious scandal[39] after Obama asserted executive privilege[40] over said documents.

Other examples of Democratic cronyism include President John F. Kennedy, who appointed his 35-year-old younger brother[41], Robert[42], as attorney general, despite questionable qualifications[43]. A few decades prior, President Harry S. Truman appointed his former campaign manager[44] to the role.

This trend arguably goes as far back as George Washington, who chose his former personal assistant, Edmund Jennings Randolph, as the nation’s first attorney general[45]. Critics of Barr’s deference to Trump regarding the Stone and Flynn investigations might be surprised to know that Washington himself routinely and publicly[46] directed his two attorneys general to start and stop prosecutions.

The Senate gets the final say 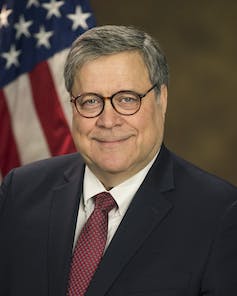 At his confirmation hearings, Barr pledged[48] that he would act independently of Trump. Yet, as attorney general, Barr consistently proved willing to serve as Trump’s sword and shield[49]. Logically though, this makes sense: The position will never truly be independent as long the attorney general is picked by[50] – and serves at the pleasure of – the president.

Garland has a track record as a moderate[51] jurist and has earned praise[52] from those across the political spectrum.

Reports of his nomination have been well received by some Republicans[53]. This is important because Democrats (and independents who caucus with Democrats) are expected to control only 50 of the 100 Senate seats, which makes Garland’s path to confirmation very narrow.