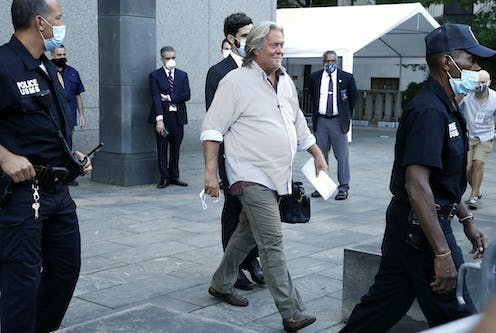 The House committee investigating the Jan. 6 attack on the U.S. Capitol is tasked with providing as full an account as possible of the attempted insurrection. But there is a problem: Not everyone is cooperating.

As of Oct. 14, 2021, Steve Bannon, a one-time aide to former President Donald Trump, has stated that he will not comply with a committee subpoena[1] compelling him to give testimony. Bannon’s lawyers have said their client is not acting out of defiance; rather, he is following the direction of Trump[2], who, citing executive privilege, has told Bannon not to produce testimony or documents.

Bannon isn’t alone in being subpoenaed by the Jan. 6 committee. Trump’s former chief of staff Mark Meadows, former deputy chief of staff Dan Scavino, former chief of staff to the acting United States Secretary of Defense Kash Patel and former Trump Justice Department official Jeffrey Clark have also been served[4]. Meadows, Scavino, Patel and Clark – unlike Bannon – have not said whether they will comply, although their actions suggest a degree of foot-dragging[5].

The responses to the subpoenas serve to delay and frustrate the committee, which now finds itself caught up in a legal fight that may deny the committee information it seeks.

It also serves to highlight that the committee has an array of tools at its disposal to gather evidence from reluctant witnesses. But there remains lingering uncertainty over how these powers of the committee rub up against claims of presidential executive privilege.

Congress handed the committee a fairly wide charge to gather evidence. On June 30, 2021, lawmakers passed House Resolution 503[6], charging the committee with investigating the activities of law enforcement, intelligence agencies and the armed forces relating to that day as well as uncovering the factors contributing to the attack, including technology, social media and malign foreign influences.

Then-President Donald Trump at the ‘Stop the Steal’ rally on Jan. 6, 2021, that preceded the Capitol insurrection. Tasos Katopodis/Getty Images[7]

Ultimately, the committee aims to issue a report with detailed findings and suggestions for corrective measures.

The select committee has already used one of its main tools for investigating the attack on the Capitol: holding public hearings and inviting testimony from key players in the attack.

Four police officers who had defended the Capitol[8] during the attack gave testimony during the committee’s first hearing.

The committee is now looking to hear testimony from former White House staffers, rally organizers and members of Congress. It can also ask for and receive information from various government agencies and private organizations.

The panel has used its power to issue subpoenas to obtain information it deems vital to the investigation from former Trump administration officials, such as Meadows, Scavino and Patel, as well as organizations that planned[9] the Jan. 6 rally.

A subpoena is a legal order requiring a person to appear and testify or produce documents.

House Resolution 503[10] expressly authorizes the committee to issue and compel subpoenas for documents and testimony.

Historically, congressional committees have preferred to cooperate[11] with the other branches of government to obtain information. But if a cooperative approach does not produce the information the committee needs, it can subpoena information and testimony from members of Congress, former White House staffers, social media companies and even the former president.

While in office, President Trump repeatedly claimed executive privilege[12], which allows a president to withhold certain information from Congress, the courts or the public, in response to congressional subpoenas served on officials in his administration.

Now Trump has advised his former aides[13] not to testify before or provide documents to the committee. He claims that such cooperation would violate executive privilege. He has also asserted executive privilege[14] to prevent the release of records pertaining to his administration from the National Archives, even though the Biden administration has said that it does not object to the release of the information.

The law is less than clear about whether a former president can successfully claim executive privilege in the face of a congressional subpoena. The executive and legislative branches have historically preferred to avoid such confrontations[15] and to negotiate the sharing of information.

As a result, federal courts have yet to determine the extent of the executive privilege retained by former presidents and when they can assert it.

Trump has extensively claimed executive privilege to cover not only matters of whether he himself can be forced to give evidence but also whether his former aides have to. In Bannon’s case it is even more curious as he didn’t work in the White House[17] during the period in which the Jan. 6 committee is investigating.

The resistance to the Jan. 6 subpoenas could lead the courts to revisit issues over executive privilege that have not been considered for 40 years.

In a 1977 decision[18], the Supreme Court held that former President Richard Nixon could claim executive privilege in challenging a federal law known as the Presidential Recordings and Materials Preservation Act. That law ensured government agencies and, ultimately, the public could have access to certain documents and tape recordings[19] made during Nixon’s presidency. Although the court allowed Nixon to make the executive privilege claim, it ultimately ruled against him and upheld the law, noting that the lack of support for Nixon’s claim by other presidents weakened his arguments for executive privilege.

Trump would not have a stronger claim. President Biden has already signaled that he will not support Trump’s assertion of executive privilege in an attempt to prevent disclosure of testimony or documents relating to the Jan. 6 attack. In fact, Biden’s rejection of Trump’s request to block the release of around 50 documents to keep them from being entered into evidence led Trump to formally claim that executive privilege[20] should prevent their disclosure.

As to Trump’s former aides, the Department of Justice[21] has already informed Trump administration witnesses that it does not support any assertions of executive privilege on matters relating to efforts to overturn the 2020 presidential election.

In light of the Nixon case and the positions taken by the Biden administration, former Trump officials may face an uphill battle in arguing for executive privilege.

Meadows and Patel are in negotiations with the panel[22] and may be trying to avoid further confrontation over the issue.

In the case of Bannon, the Jan. 6 committee’s chair has said the panel will pursue criminal charges[23], with a vote expected to take place the week of Oct. 18.

This action shows a desire by the committee to flex its considerable power in requesting information, even if that means engaging in a protracted legal battle with the former administration.

And if Bannon and other former Trump aides continue to resist, the courts may have to step in.

Portions of this article originally appeared in a previous article[24] published on Aug. 3, 2021.