Editor’s note: Although the National Rifle Association is headquartered in Northern Virginia[1], it is incorporated in New York. The gun group recently announced a new “strategic plan” to restructure under bankruptcy[2] and reincorporate in Texas. The Conversation U.S. asked accounting scholars Brian Mittendorf[3] and Sarah Webber[4] to answer five key questions related to the NRA’s intentions.

1. What precipitated this announcement?

New York Attorney General Letitia James[5] sued the NRA in 2020 over alleged financial irregularities, such as improperly making millions of dollars in payments to benefit longtime leader Wayne LaPierre[6] and other executives[7]. Among the lawsuit’s allegations is a claim that the NRA tried to disguise trips to the Bahamas and other forms of lavish compensation as business expenses. James seeks to dissolve the organization. Though it disputes many of the charges, the organization has admitted to experiencing a “significant diversion of assets[8]” through reimbursements for personal expenses. These issues have also resulted in litigation stemming from the relationship with marketing and public relations firm Ackerman McQueen[9].

A New York state judge on Jan. 21 dismissed[10] the NRA’s effort to quash the New York attorney general’s lawsuit or move it to a federal court in Albany, the state capital. 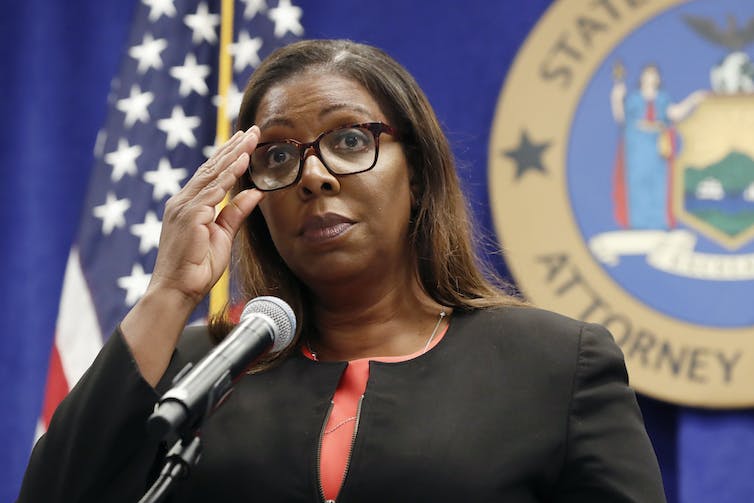 When nonprofits file for bankruptcy, that generally halts pending litigation[12] while providing more time to pay off creditors. But there is an exception for actions by governments[13], such as the pending lawsuit the New York attorney general filed in 2020. The bankruptcy case could give the NRA more time[14] to proceed with reincorporation by stopping claims from creditors and also allow the bankruptcy court to decide how to distribute and organize the NRA’s assets. This shift in decision-making authority for the NRA’s assets may help the NRA with its reincorporation efforts.

Incorporation in New York, where the group was founded 150 years ago[15], means that state regulates the nonprofit and thereby regulates the NRA’s finances. During the legal proceedings to dissolve the NRA in New York, the NRA may not transfer its assets[16]. While the NRA could set up a new corporation in Texas, the entity’s assets would not be released without consent from New York authorities. The NRA would need the bankruptcy court to have the ability to control the NRA’s assets to have a successful reorganization.

In short, given New York’s laws governing nonprofits, the NRA cannot dissolve without the state’s blessing[17]. And James responded to the NRA’s announcement by expressing her firm opposition[18] to reincorporation in Texas.

Thanks to the NRA’s concurrent announcement that it “is in its strongest financial condition in years,”[19] some observers have questioned[20] whether it is filing for bankruptcy in good faith. Based on the evidence currently available, it’s too early to tell whether bankruptcy is justified.

The NRA has experienced years of financial trouble[21]. There are plenty of red flags[22] indicating a financial tsunami on the horizon, but no sign yet that one has hit. The organization had losses in each of the past four years[23], eroding its financial position.

The NRA has managed to show resilience in terms of keeping cash on hand, ending 2019 with cash and investments worth over $75 million[24]. Yet because it owes substantial amounts to others, the assets that the NRA had available to use at its discretion amounted to a nearly $50 million deficit in 2019[25].

Having cut pension benefits[26], made layoffs and pay cuts[27], sold multiyear memberships[28] to boost revenues and even borrowed from its affiliated foundation[29], the organization is running low on ways to shore up funds. In its latest financial audit[30] from 2019 filed with New York authorities, the NRA disclosed that a large portion of its debts – $35 million – come due in 2021. That disclosure further suggests why now might in fact be an apt time for the NRA to seek bankruptcy protection.

5. Why does the NRA want to reincorporate in Texas?

In seeking reincorporation, the NRA would be changing its legal home and changing which state’s laws will govern it. Reincorporation would not require the NRA to relocate its main offices, which are in Fairfax, Virginia.

Texas is seen as a pro-gun and debtor-friendly state[31], and observers believe that it may offer the NRA more protection[32] against claims from its creditors. That is, the NRA may hope that a federal bankruptcy court located in Texas will be more likely to rule in its favor regarding amounts owed to creditors than a New York or Virginia court.

However, the NRA faces significant challenges with both its bankruptcy case and the attempt to reincorporate. The Texas court may throw out the bankruptcy petition or move the bankruptcy case[33] to another location with more substantial ties, such as a court in Virginia or New York.

Another hurdle for the NRA to clear is demonstrating whether the Chapter 11 reorganization[34] it wants to undergo is necessary. If not, the bankruptcy judge could determine this move is a ploy to try to evade New York’s power to potentially take control of the NRA’s assets. The NRA maintains that it filed for bankruptcy in good faith[35].