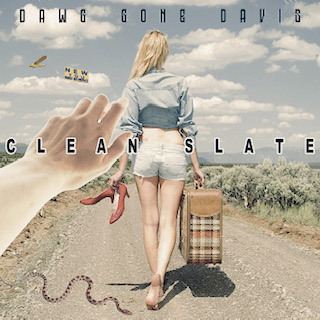 
With the crazy, painful, physically, spiritually and socio-politically upending bizarro world of 2020 thankfully behind us, there’s no time like the present to look forward and start over with a “Clean Slate” – and there’s no indie artist more insightful, thought-provoking and musically equipped to lead us through that darkness to find those necessary slivers of optimism than Rebecca “DawgGoneDavis” and Chago G. Williams.

Despite all of her personal pandemic era challenges, the witty, incisive Kansas City based rapper, rocker and songwriter experienced her greatest breakthrough year as an artist, with a total of five international hit singles created in collaboration with the man she calls her “powerful musical weapon,” German-based collaborator and renowned Euro producer, saxophonist and multi-instrumentalist Hellmut Wolf,” and the clever, fiery electric guitar of Romain Duchein.

Propelled as always by Rebecca’s clever turns of phrase and fresh, one of a kind freestyle rap, “Clean Slate” is a true powerhouse anti-hate anthem perfectly suited for these intensely divisive times. It is the third DawgGoneDavis track to feature an infectious and perfect incendiary chorus/hook and vocal feature by longtime Snoop Dogg producer Chago G. Williams – who is now an intrinsic part of Rebecca’s expansive sonic palette. Their first collaboration “Darkest Hour” reached #5 on the Euro Indie chart, followed by “No More,” which peaked at #11. The rapper’s other 2020 hits included “Judge Not Rap Yes” (which hit #3), “Weight of the World” (which debuted at #4) and “Checkered Future.” The re-release of her poignant yet whimsical holiday track “Here Comes Santa Dawg” topped them all, peaking at #2, again.

Like many of Rebecca’s gems, the free-flowing narrative of “Clean Slate” features a compelling, heartfelt personal story combined with an impactful universal message. Beginning with the provocative lines “He said, ‘It’s a matter of choice/Who poisoned our choosing?’”, she brings together reflections on the way a violent tragedy rocked her family to the core, and the need for humanity to, like everyone from Jesus to MLK and Marvin Gaye have eloquently said, to overcome hate with love. Especially in light of the horrible rhetoric and violent events (from school shootings to rioting) that have been plaguing America for far too long.

“To be blunt, this is my most powerful “in-your-face song to date,” says Rebecca. “Sure, some of my words are quirky and funny because that’s the way my mind rolls, but those phrases come with a reason, and that’s to inspire people to stop the hate and make better choices in their lives. Those opening words set the tone, where Jesus has told us we have a choice yet so many jerks among us choose to be horrible to one another, with words and sometimes actions. Just because you may have a terrible life doesn’t make it okay for you to choose to hate people. I’ve certainly enjoyed writing lighthearted songs, but the times we live in call for artists to take a bolder stance, and this is my way of contributing to that conversation.”

Some sample couplets in the opening verse convey Rebecca’s often despairing emotions regarding hatred, and her feeling that looking towards Jesus offers a road out: “Kick me in the arse/Love’s gone sparse. . .Thou shalt not kill or murder/Listen to that Sheep’s herder/He knows me well/Crying my eyes are swell.” One of her most crafty lines is about the fine line humanity walks between “Hell’s bells and heaven’s jingles,” but she offsets the seriousness with a moment of classic DawgGoneDavis comic relief we can all appreciate: “We’re all the same/Eatin’ Pringles.” That’s her way of saying our hate may arise from deep differences, but look at the cool things we have in common – like eating all kinds of salty chips.

Rebecca drives the point home when she raps, “Choose chips, not hate!” and leads into Chago’s chorus with “Go stuff your mouth with love.” Chago gets to the spiritual heart of the matter, asking for both Rebecca and our humanity at large to: “Pray for me (repeated three times)/Right now. Morning. Pray for me! Right now.” Sometimes, that’s all we have is people to pray for us all (and get out of our own permanent hate box).

In the second verse, Rebecca touches on the family tragedy. Perhaps it’s best not to go into any specific detail but simply feel and empathize with her pain and burning anger when she raps: “Eleven years later/Great detectives caught the Mo Foes. . .Devil thieves already/Crushed our hearts/Minds and souls/It’s case by case/For us it’s too late.” Considering the way a hateful and nonsensical act devastated her and her family, she can only lash out at those whose hatred manifests in any other way, shape or form: “So you can all go away….with your Glom on hate. . .”

After reminding us that Jesus told us that “life’s a pip of a storm/But I’ll keep you warm,” Rebecca then gets to the heart of the message. Just before one of Hellmut’s most intense-ever sax solos and another blast of Chago’s “Pray for Me,” Rebecca repeats like a mantra, “Erase hate/Clean slate.” “Even if it Seems hardly possible on any level, we have to speak it,” she says. It’s definitely an open-minded, real start…

With her hilarious, erudite, self-effacing and no holds barred approach to baring her soul, Rebecca’s tracks since her emergence in 2018 have received spins on an astounding 4700+ terrestrial, internet and satellite radio outlets throughout Europe, Asia, South America and the United States. Each of her songs has risen quickly on the World Indie Chart and Euro Indie Chart. In 2019, the multi-talented performer compiled her first 11 hits into a collection perfectly titled after her respect and learnings from Neil Diamond music, Hot Dawgest Night. A second EP will be out in late Spring 2021.