President Joe Biden’s Cabinet is the most diverse in U.S. history[1].

It has five women[2], including the first female treasury secretary, Janet Yellen[3], and Deb Haaland, who will become the first Native American Cabinet member if confirmed[4] as interior secretary. Secretary of Transportation Pete Buttigieg is the first openly gay man[5] to win Senate confirmation and lead a Cabinet department.

Four of Biden’s 15 Cabinet nominees identify as Latino or Black. They also span generations, ranging in age from 39 to 74.

The composition of Biden’s Cabinet matters because research shows[6] that diverse teams can provide chief executives with valuable information that ultimately produces more effective public policies. In building a Cabinet that, in his words, “looks like America[7],” Biden also sends signals to Americans of many backgrounds: People like you determine the country’s direction. People like you can make it to the top.

The Biden administration’s diverse leadership may send a message to the world, too.

Our work on gender inclusion and Cabinet picks[8] suggests that when world leaders – particularly those in powerful countries – appoint more gender-balanced Cabinets, other world leaders may become more likely to name women for key posts.

In any given country, domestic factors – from how the electoral system is set up to what the executive’s relationship is with the legislature – primarily drive Cabinet selection. Generally speaking, heads of government select their Cabinet members for their expertise and to shore up support among domestic constituencies, not to gain international celebration.

But even controlling for domestic factors, world leaders who broadcast the idea that gender equality matters can affect the decision-making of other leaders.

For example, in October 2018, Ethiopian Prime Minister Abiy Ahmed made international headlines by presenting a gender-balanced Cabinet. Days later, Rwandan President Paul Kagame upped the number of women[9] in his own Cabinet.

The period between Ethiopia’s and Rwanda’s announcements was particularly quick, but such processes – where heads of government follow the lead of their neighbors – are not uncommon. Having a neighboring country with an above-average percentage of women Cabinet ministers is associated with an 8% increase in female Cabinet ministers in nearby nations, our research shows. 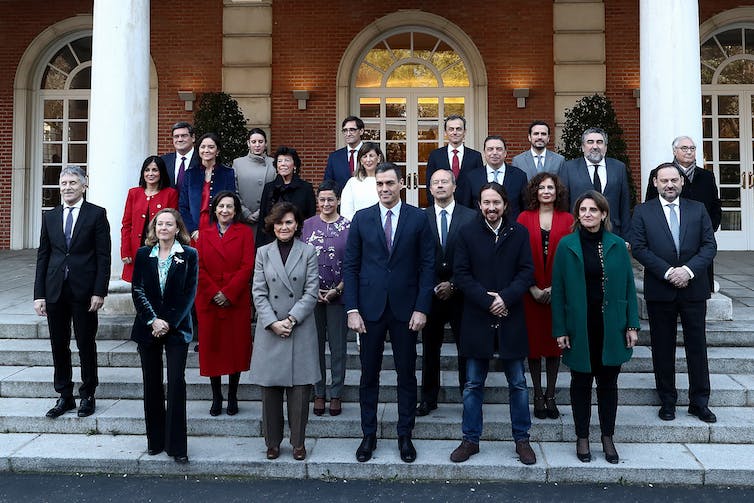 Getting more women into government leadership has merits beyond the obvious value of gender equality.

It’s not yet clear whether women’s representation causes these phenomena or is merely correlated with them; political scientists continue to study this question.

Countries that prioritize women’s equality in politics also tend to do more to protect civil liberties[15] and safeguard human rights[16]. South Africa’s 1996 constitution not only steered the country away from apartheid and toward an embrace of human rights – it also institutionalized gender equality as a principle.

In South Africa and elsewhere, the pillars of inclusion reinforce each other.

Representational messages beyond the Cabinet

Biden’s Cabinet members aren’t the only group of government officials that will receive international scrutiny. Our research on ambassadors[17] suggests that world leaders will also pay attention to the envoys that Biden sends abroad.

Countries that commit to gender equality appoint more women ambassadors. Take, for example, Sweden – a vocal proponent of ensuring women’s participation in foreign affairs – and China. Almost 40% of Sweden’s 103 ambassadors[18] are women, while fewer than 7% of China’s 165 ambassadors are.

Governments that are more dependent on international aid seem particularly keen to factor donor countries’ decision-making into their own political appointments. The 37 countries that the World Bank classifies as particularly deep in debt[19] – a group that includes countries like Ethiopia and Bolivia – dispatch four times more women to Washington than they do to Beijing.

[Deep knowledge, daily. Sign up for The Conversation’s newsletter[20].]

In the short term, Biden’s attention to gender balance in his administration increases the likelihood that leaders of other countries will similarly diversify their executive staffs.

In the longer term, continued American commitment to gender balance could strengthen equality and peace worldwide.