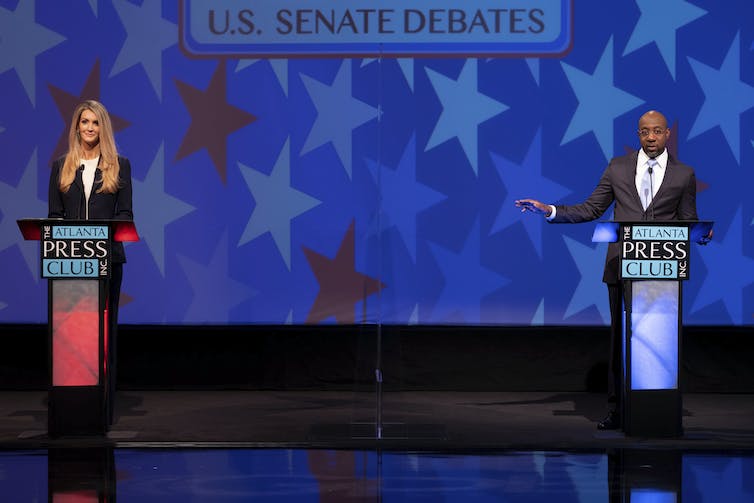 It’s no accident that few Black candidates who have run for the Senate or a governorship have won. They often face overt racism.

For instance, in 2006, Tennessee Democratic Senate candidate Harold Ford Jr. was revealed to have attended a Playboy Super Bowl party[5]. The Republican National Committee produced an attack ad that featured a white woman with bare shoulders winking and saying, “Harold, call me.” It wasn’t just racy – it was racist, critics explained, because it exploited a false stereotypical “image of the Black male sexual aggressor[6].”

My research shows that Black candidates for statewide offices also face opposition that is more subtle, but no less powerful. These efforts use language aimed specifically at whipping up conservatives’ support, but crafted in a way to avoid complaints of racism from liberals and moderates.

In a 2014 article in the Western Journal of Black Studies, I found that when African Americans run for office, their opponents frequently claim that the Black candidate is “too liberal” for the state[7]. That’s often a code meant to signal that the candidates want more government aid, affirmative action and “soft on crime” policies, all often seen as helping Blacks but paid for by white people’s taxes.

While a number of African American candidates may hold left-of-center views, these ads not only exaggerate these positions but seek to tie in racial politics, like North Carolina Senator Jesse Helms’ 1990 attacks on Charlotte Mayor Harvey Gantt.

Helms’ ad accused Gantt of supporting racial quotas (which he had not) but also claimed that this meant he supported a white person being fired so a minority could benefit[8].

In 2012, Newt Gingrich called Barack Obama “the food stamp president[9]” when running against him, seeking to paint Obama as someone who would prioritize welfare spending on primarily minorities instead of defense spending or tax cuts back to “hard-working Americans.”

And in 2020, U.S. Sen. Kelly Loeffler called her challenger Warnock a “radical liberal” at least 12 times in a debate[10], while also frequently labeling him “a socialist[11].”

In one comment, she added, “I cannot stand by and let Georgians not know who my opponent is[12], how radical his views are and how he would fundamentally change our country. He’s out of step with Georgia’s values.” She also attacked Warnock with the debunked claim[13] that he supports calls to “defund the police.”[14]

The National Republican Senatorial Committee ran an ad attacking Warnock for supporting “cashless bail for criminals[15] … [which] puts the most violent right back in our neighborhoods.”

But African Americans can win more votes in statewide elections with moderate positions[16], and that was Warnock’s approach.

He countered that he supports cashless bail only for nonviolent offenders[17]. He also clarified that he doesn’t support defunding the police[18], but rather favors criminal justice reform, a more mainstream phrase. “We can do all that and celebrate police at the same time,” he said.

In addition, Warnock had an effective counterattack, slamming Loeffler and Republicans for opposing COVID-19 relief efforts[19] and argued that Loeffler had profited from the pandemic, selling nearly US$20 million in stock[20] after a closed-door Senate meeting warned that the virus was about to cause national economic damage. 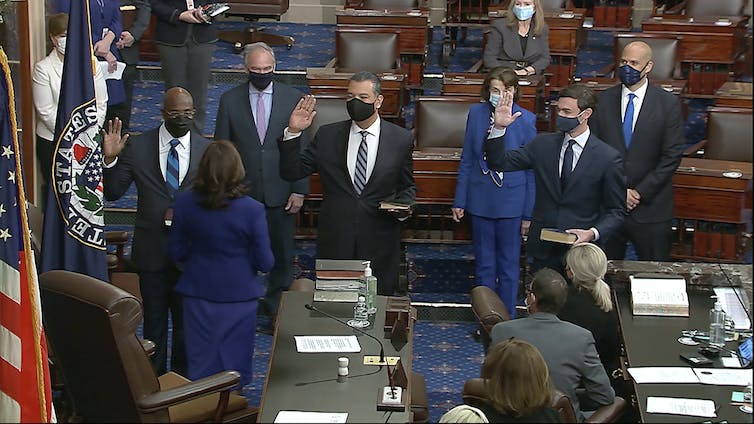 Another frequent line of attack on an African American candidate is that the person is not experienced enough to serve in the position he or she is seeking. This is another code phrase to imply the candidate is not the best candidate, a subtle connection to odious “black inferiority” arguments[22].

In an analysis I published in 2014, I found that only one African American candidate, Deval Patrick, had won a gubernatorial or Senate race without previously holding elected office[23]. However, he had served as an assistant attorney general[24] in the Clinton administration before he was elected governor of Massachusetts in a race where there was no incumbent seeking reelection.

In 48 elections from 1964 to 2014, only 10 African Americans won their statewide elections for governor or senator. Most of the candidates who prevailed had prior statewide experience before running and winning[25], as opposed to serving in the U.S. House or as a mayor or member of the state legislature. Examples include Edward Brooke, who was Massachusetts attorney general before winning a U.S. Senate seat, and Doug Wilder, who was Virginia’s lieutenant governor before winning his gubernatorial race.

My research has also showed that an African American had never defeated an incumbent senator or governor in more than 25 attempts[26] across the nation’s history, before the January 2021 Senate runoff in Georgia.

On Jan. 4, 2021, the day before the Georgia runoff election, U.S. Sen. Marco Rubio, a Florida Republican, wrote a Fox News opinion column that claimed Warnock and fellow Democratic Georgia Senate candidate Jon Ossoff – running in a separate runoff against incumbent Republican David Perdue – were “wholly unqualified[27]” to be U.S. senators, as neither had held an elected position before.

But this argument may have been neutralized by the context: The president at the time, Donald Trump, had never held elective office nor had any military service[28] before his 2016 presidential run. And both Georgia incumbents were relatively inexperienced at electoral politics as well. Loeffler had never held elected office[29] before her appointment to the U.S. Senate in 2019. Perdue’s first election victory was his Senate win in 2014[30]. 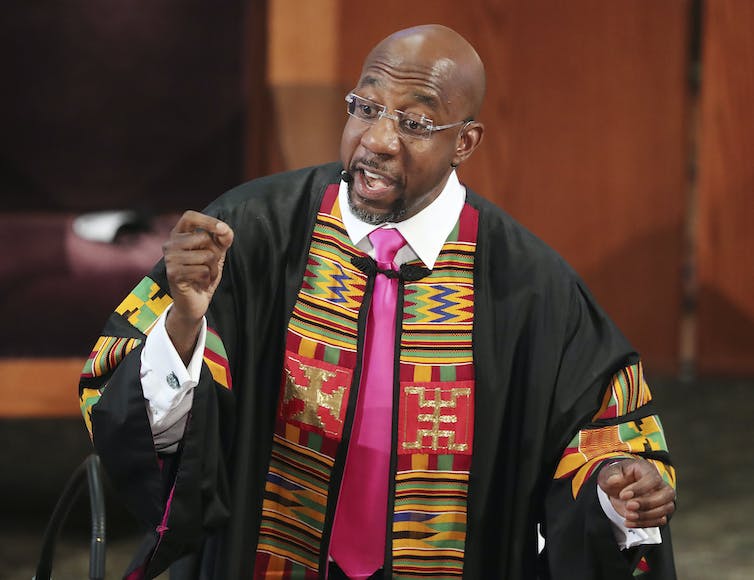 Warnock was also able to highlight his work as the pastor at the historic Ebenezer Baptist Church to bolster his credentials. He has been active in politics, including getting arrested for leading social justice protests, like a 2017 arrest for praying in the U.S. Capitol[32] against the repeal of the Affordable Care Act.

As he said in a west Georgia campaign stop[33], “If you want to lead Martin Luther King’s church, you can’t be afraid to be arrested.”

Loeffler found out that attacking a preacher in a Southern political campaign[34] wasn’t necessarily a good idea.

Warnock embraced his unique life experience to effectively defeat charges that he was unqualified and maintained positions with mainstream appeal to counter accusations of radicalism.

As a result, he made history by defeating a Senate incumbent despite his own lack of electoral experience – and became the first African American Democratic U.S. senator from the Deep South since Reconstruction, and the first ever to be popularly elected.