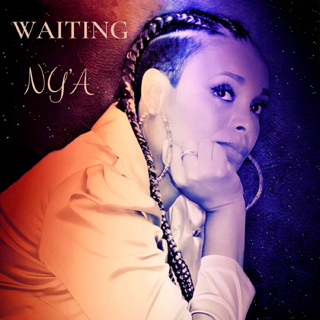 An unstoppable force in indie R&B music since her re-emergence in 2015, Ny’a has topped the World Indie and Euro Indie Charts countless times, hit the R&B Soul Chart and Club Music Chart Top 20 and became the first artist since Janet Jackson to hit #1 for three consecutive years on the RnB Souleffect-TV chart (2018-20) with her hits “You Don’t Really Love Me,” “304,” “Mend,” “Don’t Judge Me” and “We Are Strong.” With her latest single, the sultry and sensual, easy grooving “Waiting,” the multi-talented New Jersey based vocalist and songwriter meets our collective moment perfectly, reflecting our cautious hopes as we look ahead and move past the pandemic era towards a brighter day.

“Waiting,” which also topped the RnB Souleffect TV chart out of the box and debuted at #4 on the WBNC Break N Chainz Radio playlist, offers a fresh vibe and an optimistic feeling that hits just right for springtime. Like all of her hits starting with 2015’s “So Confused” and “I Like It,” the track was produced by veteran singer-songwriter and Grammy nominee Kenny Black, aka “The Music Machine,” who has worked with everyone from Sean “P. Diddy” Combs and Lauryn Hill to L’il Wayne and gospel legend Marvin Sapp.

Ny’a draws us into the sexy flow from the get-go, sharing her heart about what it’s like when that special person comes along and somehow everything just feels right: “I used to feel so insecure/but then you came along and showed me love/It’s the kind of love that fills you deep, helps me understand why you were here with me.”

The singer then reminds us that finding that  true love is not only a matter of physical attraction and the heart, but also a deeply spiritual connection that for some could also extend to receiving and being uplifted by divine love in their lives. She sings: “Unconditional, spiritual kind of peace, that is what you give to me. . .So I’m waiting…waiting (up on ya). . .I’m gonna be right here..” This sense of completeness leads her to declare: “Can’t nobody take away this joy I feel/The kind of joy that gives you strength, helps me understand that you are heaven sent…”

“Waiting’ has a very different flavor than my recent tracks like ‘We Are Strong’ and ‘National Fraud Day,’ which were sociopolitical reflections of the times we live in,” says Ny’a, whose recent discography also includes Something for Everybody, her perfectly titled 2017 album that included club music, old school hip-hop, two-step and “Mend,” a romantic duet with Kenny Black.

“After all the turmoil of the past year, this song about waiting for that one person or thing that can bring you the kind of peace and joy that allows you to instinctively know what it’s like to feel unconditional love. It doesn’t have to be a single person or about passionate love. It could be a spiritual person who uplifts you and brings you peace. Or it could be about the need for divine healing after feeling so downtrodden. The beauty of the song is that it’s left to the listener’s interpretation. I’ve been happily married for 28 years but I know from the experiences of family members and friends what it’s like to be waiting on that one person that can bring you that peace of mind and who can make you feel whole. It’s a song of encouragement at a time we all need to feel hope for better things.”

While Ny’a has been all over the indie global, pop, R&B and club charts with smash hits that have played on hundreds of stations in the U.S. and in over 80 countries worldwide, the singer enjoyed an initial string of success years earlier, when her 1996 debut album Embrace on Nap Records sold 500,000 units worldwide, earning gold status. Her singles “Alright” and “I Don’t Want You” became international hits and were licensed in 32 countries. The video for “I Don’t Want You” was in rotation on BET and the clip for “Alright” ran in 40 markets nationally and reached #3 on the Top 20 Video charts on Star – U.S.A. Network in Abidjan, Africa, charted by the legendary Joe Webb. The “Alright” remix single, featuring rapper Chubb Rock, was in rotation on over 100 radio stations nationally and was on the “Rock Da Houze” movie soundtrack.

A third single from Embrace, “Take It To the Top,” scored high on the club charts and became the most requested club record in NYC, according to Sure Record Pool. The track was produced by Grammy winning producer Ken Johnston, with mixes by DJ Tony V and DJ Spin, and featured backing vocals by club legends, Kenny Bohbein of Kenny, and Friends and Grammy Award Winning Singer, Sabrina Johnston, along with Sounds of Blackness background singer, Latrice Varrett. Ny’a opened for Motown recording artist Horace Brown on the Coors Light Tour and also for Arista recording artist Deborah Cox live on BET.

After taking time away from the music industry to raise her family and develop dual careers as a top university level women’s basketball coach (including at her alma mater Union County), she got the itch to write, record and perform again. She brought a wealth of life experience and maturity to her current, still exploding career as an R&B singer/songwriter. Meeting Kenny Black through her husband helped accelerate her dreams and she’s enjoying even more success in her second go round.

“I have an amazing creative chemistry with Kenny,” she says. “I trust him and he trusts me and we never bump heads. We think alike and we are always in synch in pursuit of the sound we are looking for. Sometimes I bring him a song and he creates the beats and vibe around that, and on other tracks, he creates the vibe and I take it home and write to it. It’s the kind of dream partnership that reflects another aspect of ‘Waiting’ and then meeting that person who helps take you to another level in your life.”