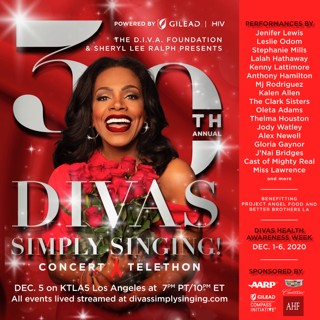 DIVAS Simply Singing!, the longest consecutive running musical AIDS benefit in the United States, hits a major milestone in 2020, hosting its 30th annual fundraiser for The D.I.V.A. Foundation as a virtual event and on Saturday, December 5th on KTLA

Produced and hosted by Tony Award nominee, Spirit Award winner, honored AIDS activist and The D.I.V.A Foundation founder Sheryl Lee Ralph, it is the culmination of DIVAS Health Awareness Week, a slate of programming that kicks off with a World AIDS Day Townhall on December 1.

In addition to streaming online, for the first time in its history, DIVAS Simply Singing! will be telecast locally in Los Angeles on KTLA (Channel 5) from 7pm - 9pm PST and numerous other stations throughout the U.S. owned by Nexstar Media Group.  The event will include appearances by multi-Grammy Award winning singer Lalah Hathaway, actress/comedian/singer Jenifer Lewis, Grammy Winning R&B singer Anthony Hamilton and many others to be announced.

Other scheduled virtual events include the streaming of a “World AIDS Day Townhall”; a riveting all-star reading of “Sometimes I Cry: Real Women & Real Stories about HIV/AIDS”; a “DIVAS Health Awareness Panel Discussion”; “DIVAS Rewind: The Best of DIVAS Simply Singing!”; and much more. This year, Sheryl Lee’s DIVA Award presentations will be folded into the main DIVAS Simply Singing! television event.

Funds raised through DIVAS Health Awareness Week will benefit Project Angel Food (PAF) and Better Brothers Los Angeles (BBLA). The D.I.V.A Foundation has been involved for several years with Project Angel Food, which was created by a group of compassionate volunteers who were concerned about our most fragile community members suffering in silence from malnutrition and the many other ravages of HIV/AIDS.  Having expanded their services to any person battling life threatening illnesses, they are part of the Food is Medicine Coalition, an innovative healthy food pilot program for low-income Californians with chronic health issues.

Sheryl Lee says, “Project Angel Food is a crucial organization that addresses the very real problem of food inequity. In this time of COVID-19 and vast economic uncertainty, it is even more real for people. In the beginning PAF was dedicated to those suffering with AIDS and unable to feed themselves. Now, food inequity is a larger health issue because of COVID-19 , and how our frontline workers and people who have suffered from  the virus are also in need during this challenging time.”

Better Brothers Los Angeles (BBLA) is an organization that educates, inspires and connects the Black LGBTQ community in Southern California. Striving to create safe spaces for Black LGBTQ individuals to gather and grow. Their mission is to develop a stronger sense of community and overcome the challenges of cultural-stigma and religious opposition to their orientation. Annually, Better Brothers Los Angeles hosts The Truth Awards. The annual event awards tuition and book scholarships to promising Black and Brown LGBTQ youth which The D.I.V.A, Foundation supports.

“Our annual DIVAS Simply Singing! event has helped so many in need because of the many leading brands and the talented DIVAS who come every year to raise their voices in song for the cause,” Sheryl Lee says. “We began 2020 with excitement as we were underway with our plans for this year’s 30th celebration, and we all experienced the entire planet shut down in response to the Coronavirus epidemic. Each of our worlds evolved into something we had never seen.”

“The impact that this pandemic has had on so many lives globally has been vast, and our new normal is now before us,” she adds. “After much deliberation, we decided to take our World AIDS Day commemoration virtual and expand our programming.  We will continue to fight stigma, raise HIV/AIDS awareness and other critical health issues, every dollar raised through our efforts has gone to help men, women, and children fighting HIV/AIDS and other life-threatening diseases. The lights, the mic, and the DIVAS Simply Singing! is a show like no other.”

An acronym for “Divinely Inspired Victoriously Aware,” The D.I.V.A. Foundation is a national not-for-profit 501(c)3 charitable organization founded Ralph in 1990 as a memorial to the many friends she lost to HIV/AIDS as an original company member of “Dreamgirls” on Broadway.

The foundation stems from Sheryl’s deep concern for the lack of attention given to AIDS in the early years and now COVID-19 has exposed the huge health disparities that exist for people of color.  The D.I.V.A. Foundation uniquely uses the transformational power of the arts as a vehicle to raise funds, awareness, erase the stigma still connected to HIV/AIDS, mental wellness, and educate people about STIs, HIV, Heart disease, Cancer and other life-threatening diseases. As their mission statement says, “We simply dare to care.”