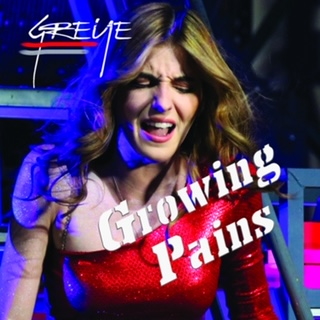 Hannah Summer, unpredictable musical provocateur and fiery front person for Daytona Beach, FL indie powerhouse Greye, says that when she’s penning her lyrics, the imagery is always the most refined version of whatever obscure thought happens in her brain prior to her unleashing it on the page and later in live performance. Yet when her bandmates – drummer Ray Grimard, guitarist Jett Wolfe, bassist Josh Reid and keyboardist Kenn-e Williams - presented her the propulsive, blistering high octane tracks she turned via her deft turns of phrase into their latest mega-single “Growing Pains,” COVID era inspiration wasn’t hard to come by.

The singer/songwriter’s wild brain went there from the get go, laying it out in a personal yet universal way we can all relate to, and eventually sharing it via her otherworldly opening falsetto:“The world around me is fading at the edges/That prickling black is getting narrower, narrower…”

That’s a rough tough talk start for a song that ultimately drives towards helping us find optimism in the midst of the craziest, most anxiety ridden year ever. We’ve all been affected, impacted, messed and depressed, looking desperately for silver linings. But indie musicians, always busy as heck but often having to supplement their gig pay with day jobs, have been particularly roiled as indoor venues have chained the doors. Greye went from over seven years of gigging up and down the Atlantic Coast and throughout the Midwest, averaging 100 shows a year, to just a few local shows lately (after months of layoff) as Florida slowly eases restrictions. Fortunately, the band’s survived its own “Growing Pains” quite well, using their time to put the finishing touches on So Far So Good, theirperfectly titled upcoming full-length album and follow up to Under the Weather in 2019.

In addition to “Growing Pains” and the handful of hard-edged singles Greye will be unleashing in the coming months, the collection will include their recent hit singles “Play God,” “Lucky” and “So Far So Good,” their biggest chart hit yet. The album’s title track has been #1 on both the World Indie Music Chart and the Euro Indie Music Chart for four weeks. “Lucky,” whose intensely compelling video has over 1.2 million views on YouTube, hit #1 on the World Indie Music Chart, #2 on the European Indie Music Network Chart, #7 on De Ned Top 40 (from Ned.fm in the Netherlands) and #15 on the DRT Top 50 Rock Airplay Chart.

So yeah, for sure Greye has been making the most of their “Growing Pains” during this time while enjoying a lot of chart success. But let’s get a little deeper into Hannah’s head as she and the band take us from lines like “Dogs that never had bitten me/Getting meaner and meaner still” and “Now that my colors are blurring all together/a kaleidoscope twisting, making me dizzier…” to bold proclamations of breakthrough: “Maybe someday I’ll be done with all my growing/See the sun light through new eyes getting’ brighter. . .We have to grow to lift things we couldn’t carry/Things you once would let crush you just getting lighter and lighter.”

In Hannah’s unique, ultimately hopeful world, and those of her tightly knit multi-generational bandmates, the darkness is just another door to light, and challenges can only make us better, tougher and more determined to survive and succeed. And let’s remember, day job wise, Hannah had just been furloughed, and that, combined with Greye not being able to play, put her in a pretty dark place. She and the world were going through their “Growing Pains” at the same time.

“As time goes by, we are bound to go through countless changes, and at times change can feel completely overwhelming and life altering,” she says. “However, rather than seeing change as a hindrance to growth, ‘Growing Pains’ is all about accepting change as a positive challenge than helps us see life in new, better ways. Growing is painful but you can look at that in a positive light. The track the guys gave me was dark and eerie and put me in that mode at the start, right when everything was falling apart. My lyrics at the start align with that. The easiest thing to do is just say everything sucks give up and not do much. But that moping can’t last forever.

“I didn’t set out with a conscious plan to go from feeling in a vise with the walls closing in to a more enlightened big picture perspective,” Hannah adds. “My method of writing is stream of consciousness, always starting with the verses to get a general idea as it heads towards the chorus. This song is more of an A section, B section structure, and the hook is me singing growing pains and the guys echoing that vocally. Ultimately, we arrived at a gritty, important message that no growth ever happens in your comfort zone. If you face an uncomfortable situation, as we are all doing this year, we should learn to see that as an opportunity and not a hindrance. Growing isn’t easy but it leads to good results. This song is definitely a product of 2020, but I think creatively it would have happened one way or another without it.”

For their part, Ray, Josh, Jett and Kenn-e compensate for the song’s unusual lack of obvious musical changes by changing their dynamics to match Hannah’s vocal and narrative flow, resulting in a slightly slower feel in the verses and a more powerful repeated chorus. Once Hannah had written the lyrics and Greye began rehearsing, the guys adjusted their parts to match her singing as she moved from her falsetto to her gritty, trademark Pat Benatar-like intensity.

Josh and Jett in particular were thrilled with Hannah’s lyrics because they related to them personally. Josh says, “The theme of ‘Growing Pains’ matches the music perfectly. It has a strong linear structure, reflecting the idea that you enter times of conflict in your life and as you move through it and get to the end, you become a better person for it. I lost my day job and could have been a baby about it, but I took the opportunity to go back to trade school.” Jett adds, “I’m with Hannah when she says when you’re the most uncomfortable, that’s when you’re learning. We all see so many blessings and gifts during this time. When our European tour was cancelled, we could have sat on our thumbs, but we took the opportunity to hunker down, write the rest of our album, refine it and make the most of the down time as we could. Without the lockdown, we never would have finished it.” 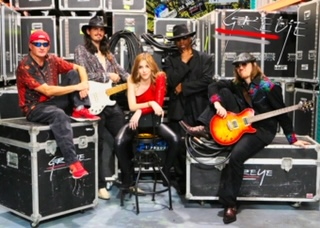