Fathers have a significant impact on their children’s well-being – an impact that begins even before the child is born. In fact, studies have shown that fathers who are involved during pregnancy have healthier children[1].

During the early years of life, emotionally nourishing father-child relationships lay the foundation for lifelong health and well-being for children. Fathers who are involved during pregnancy also tend to stay involved over the long term.[2] Indeed, the positive influence of father involvement can be felt throughout adolescence and young adulthood[3].

Our research lab[4] studies father-child relationships, and we recently looked at the question: What early parent education programs are out there to support fathers during the prenatal and postnatal periods? Our study, published on June 14 in the journal Pediatrics[5], suggested that there are not that many. 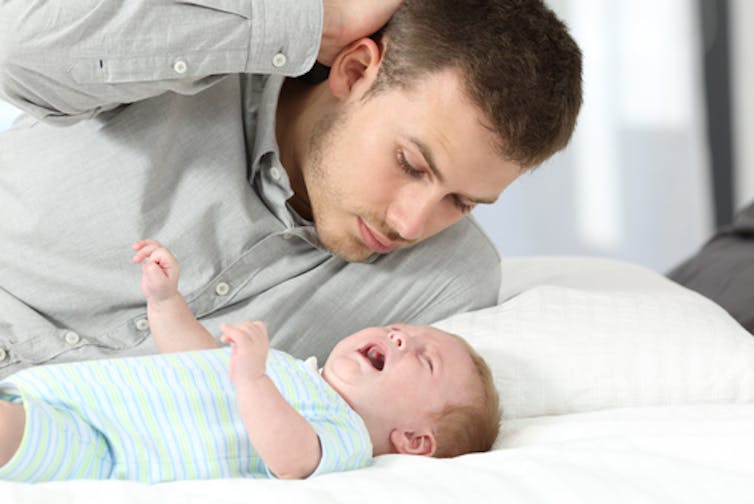 Studies suggest that fathers want to be involved but may not know how to do so. Antonio Guillem/Shutterstock[6]

Specifically, our systematic review[7] examined U.S.-based parent programs for men during the perinatal period, i.e., pregnancy through the first year of life. We could identify only 19 programs (out of a total of 1,353 studies reviewed) that were considered “father-friendly.” Father-friendly was defined as involving or targeting fathers and including outcomes related to fathering, such as father involvement, father-infant interaction and father’s parenting knowledge.

Most programs were offered in clinic or hospital settings. Programs ranged from general education programs (on childbirth, infant care and infant development) to relationship and co-parenting programs to clinical and case management programs.

In addition to the small number of existing programs for fathers, most programs reviewed in the systematic review lacked evidence of improving key fathering outcomes. Relatedly, only three studies were considered high quality. These findings demonstrate the dearth of father-inclusive programs that yield promising outcomes.

Overall, when it comes to education and support during the perinatal period, research shows that there are few parenting programs[8] to prepare men for the magic moment[9] when they welcome their new baby, even though this time has been identified as a critical window of opportunity[10] to intervene to support fathers during their transition to fatherhood.

Most existing programs are designed primarily for mothers[11]. This is a missed opportunity, because fathers in the U.S. are increasingly involved in their children’s lives[12]. And fathers today want to be involved not just as breadwinners, but also as caregivers who provide nurturing and responsive parenting. 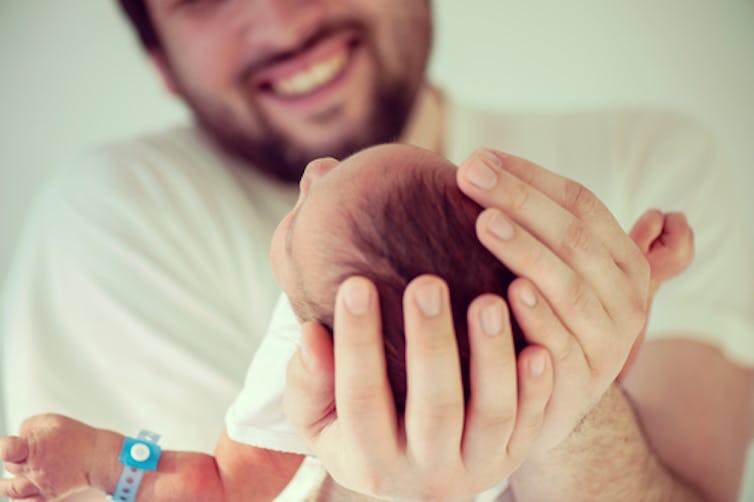 A father and newborn. Fathers have reported that they feel neglected in obstetric and pediatric settings. ESB Studios/Shutterstock[13]

In obstetrics and pediatrics settings, fathers participating in research have reported feeling neglected[14]. They are often viewed as playing a secondary role to mothers. This may entail the father seeing himself as a “helper” of the mother instead of a “co-parent” alongside the mother.

This neglect persists for several reasons[15]. For instance, health care professionals may be unwilling or inadequately trained to work with fathers. Clinical services may not be sensitive to men’s parenting needs. Further, mothers might limit men from being engaged in prenatal and postnatal services.

Yet, men have a vital role to play during infancy[16]. To help address the above barriers, Michael Yogman and Craig Garfield[17], pediatric faculty at the Harvard Medical School and Northwestern Feinberg School of Medicine respectively, recommended that health care professionals engage in father-friendly practices. These include acknowledging fathers’ presence at health care visits, welcoming fathers directly, educating fathers about parenting, and encouraging fathers to assume childcare roles early on.

Although there aren’t many yet, innovative parent education programs targeting men during the perinatal period are emerging. One example is Dads Matter[18], a father-friendly home visitation program that may improve fathers’ engagement with their babies among socioeconomically disadvantaged families.

Another emerging program is Baby Elmo[19]. This is an interactive program that helps fathers understand their babies’ emotional needs to support positive father–child interactions. Baby Elmo is currently being tested for its effectiveness within low-income communities.

Our research lab is implementing a father engagement program[20] for low-income fathers, in collaboration with Healthy Start home visitation programs in Michigan.

On the whole, these programs help ensure that American children – especially those at the highest risk of living apart from their fathers – grow up in households where their fathers or father figures are positively involved from the very beginning.

Fathers play a key role in children’s lives, starting from the very beginning of life. Their involvement in pregnancy is just as important as the involvement of mothers. We celebrate mothers on Mother’s Day and offer multiple programs and resources for helping women navigate motherhood.

We also celebrate our fathers on Father’s Day. However, we leave them with almost no resources for navigating the transition to fatherhood. This disparity in services is inevitably hurting not only fathers, but also their children. It’s time to change this narrative.