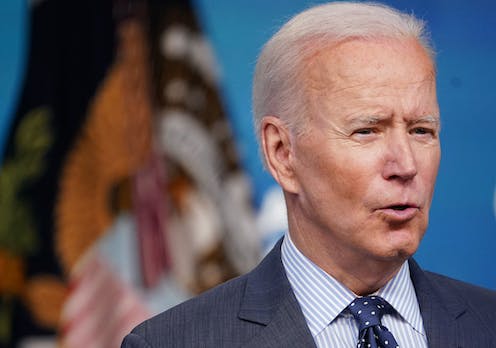 Many liberals feared the court was becoming too conservative and called on then-candidate Joe Biden to “pack the court” by adding new seats and filling them with liberal justices.

After dodging the issue for weeks, Biden finally committed[3] to creating “a bipartisan commission of scholars” to compile “recommendations as to how to reform the court system.”

In early April, President Biden created a presidential commission[4] of 36 legal experts to produce a report on Supreme Court reform.

While the commission’s report may or may not recommend changing the number of seats on the court or other proposals Biden might consider, our research[5] suggests that presidential commissions have little influence on public attitudes toward presidents’ policies.

Presidents have assembled commissions of outside experts to investigate a wide range of policy problems, such as the financial stability of Social Security[6], oil spills[7] and violent crime[8].

These commissions serve many purposes for presidents[9]. For instance, they can investigate and gather facts. Or they can allow presidents to avoid taking action[10] on certain issues while simultaneously giving the appearance they are addressing them.

On March 2, 2015, President Obama delivered remarks after receiving a report of recommendations from the Task Force on 21st Century Policing.

Another common function of commissions is to bolster the credibility of the actions presidents take on issues they study. By relying on experts they appoint to commissions, presidents hope to convince the public that their actions are based on evidence reviewed by specialists rather than political calculations.

Obama endorsed the commission’s final policy recommendations, one of which was to advocate for independent investigations of cases in which police kill civilians, or what are known as deadly use-of-force incidents.

We randomly assigned respondents to one of four groups and asked them to read a short summary about a new policy encouraging local police departments to use independent investigators in cases in which civilians are killed by police.

After reading their assigned summary, we asked respondents about their approval of President Obama’s handling of police-community relations. Additionally, we asked whether they thought that police departments or independent investigators could fairly investigate deadly use-of-force cases.

We found that respondents who read that President Obama relied on a commission’s recommendation were no more supportive of his handling than those told that he adopted the policy on his own. These results suggest that commissions do not help presidents generate public support for their policies beyond the support they enjoy for taking action themselves.

We found similar results when examining respondents’ confidence in the ability of police departments or independent investigators to conduct fair reviews of use-of-force cases. Our results indicate little difference in respondents’ perceptions of the policy’s efficacy whether it emanated from a commission or through direct presidential action.

Thus, commissions do not enhance the credibility of presidents’ policies in the eyes of the public.

Biden doesn’t have only a Supreme Court commission; he’s also got a task force to advise him on how to address bottlenecks in the semiconductor, construction, transportation and agriculture sectors.

The results from all four experiments point to a common conclusion: Presidents’ policies experience similar levels of support regardless of whether they develop and implement them on their own or with the help of a commission.

Our study has several limitations. Because our experiments focused on President Obama, we cannot know how our findings generalize to presidents with different characteristics, such as party affiliation or policy expertise.

Additionally, our experiments did not consider the issue of Supreme Court reform, which may be a more prominent issue than those we considered.

However, since polarization makes persuasion more difficult[13], the potential for Biden’s court reform commission to influence public opinion is likely low. While commissions on more prominent issues than those we studied could affect public opinion, our political environment and the issue of court reform is so polarized that we are unlikely to see an effect.

Speaking in Gettysburg, Pennsylvania, in October 2020, then-candidate Joe Biden[14] pledged to “marshal the ingenuity and good will of this nation to turn division into unity and bring us together.”

[Over 100,000 readers rely on The Conversation’s newsletter to understand the world. Sign up today[15].]

By creating a bipartisan panel of experts, Biden likely hopes to temper the politicization surrounding the debate and confer credibility on reforms he might pursue.

However, once the time to push policy change arrives, Biden might find that public support for his reforms would have been the same had he not convened it.