When police officers kill people without apparent justification, those officers may face both criminal charges – as in the case of Derek Chauvin, convicted of murdering George Floyd[1] in Minneapolis in 2020 – and civil lawsuits.

Floyd’s family filed a federal civil rights suit against Chauvin and three other officers, alleging they used “unjustified, excessive, illegal and deadly force[2]” while detaining him. The suit also named the city of Minneapolis, alleging city officials did not have good policies about using force and didn’t train the officers properly.

In March 2021, as Chauvin’s criminal trial was set to begin, the city settled the lawsuit – agreeing to pay US$27 million to Floyd’s family[3] – but Chauvin and the other officers paid nothing.

That’s because, as a Minneapolis police officer at the time he killed Floyd, Chauvin was legally immune from civil lawsuits seeking damages for his actions. The principle is called “qualified immunity,” and it protects government workers from being sued for things they do in their official roles at work.

A brief history of immunity

The U.S. legal system has two types of immunity. The first is absolute immunity, which has a long history dating back to judges’ rulings under English common law[4] from the 1700s. This type of immunity protects judges and lawmakers from being sued[5] by people who suffer financially from their rulings or policy decisions. Therefore, judges and lawmakers are free to make the best decisions for society as a whole without worrying that anyone who is somehow harmed by their choices could come back and sue them for damages.

The second kind of immunity, the one that affects police officers, stems from the Civil Rights Act of 1871[6]. That law allowed an officer to be sued for official acts only if he knew, or should have known, that his action would violate a person’s constitutional rights, or if he intended to deprive someone of their constitutional rights. This liability depended on the officer’s internal state of mind, which is notoriously hard to prove in court[7].

In 1967, the U.S. Supreme Court changed that focus. The change came about in a ruling that an officer could not be sued for false arrest[8] in the arrest of a person who was later found not to be guilty of a crime. The court did not look at the officer’s state of mind. Instead, the court compared the officer’s actions with those that would be taken by a reasonable public official[9] in the same circumstances. If the officer’s actions were reasonable, then immunity was granted.

Over time, this immunity has been expanded by the courts. It now extends to cover other misdeeds[10], such as infringement of a suspect’s civil rights during the exercise of a police officer’s authority, whether those misdeeds were intentional or not[11]. 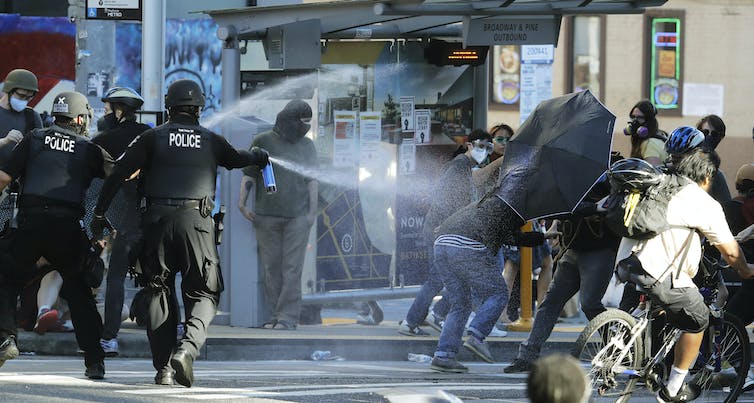 Police use of force, as in this July 2020 pepper-spraying incident in Seattle, is under scrutiny around the country. AP Photo/Ted S. Warren[12]

The current standard, created by the Supreme Court in 1982[13], protects officers from being sued in civil court unless their actions are objectively ruled a violation of the law.

An aggrieved citizen with a civil rights complaint can no longer argue that an officer’s conduct was motivated by wrongful intent, malice or even prejudice. What matters is not what the officer did but how it compares with what a reasonable officer might have done.

The result of the changed standard has been to severely limit the number of civil claims[14] against police that make it past the officer’s broad defense of qualified immunity.

Over many decades, and with increasing intensity in recent years, news reports and citizen complaints have identified police officers harming civilians, particularly Black Americans, seemingly with impunity. Officers know the law will shield them from personal liability, and they also know that it is rare for officers to face criminal charges[15] – much less be convicted.

But recent examples may bring additional attention to this issue.

In March 2021, Marion Humphrey, a Black law student at the University of Arkansas, filed a federal lawsuit against an Arkansas state trooper[16], alleging the trooper unlawfully searched his personal belongings during a traffic stop in August 2020. The trooper has not been disciplined or faced criminal changes, but the lawsuit says a video camera captured the trooper making insulting remarks about Humphrey’s race and age.

In April 2021, Caron Nazario, a Black U.S. Army lieutenant, filed a civil rights lawsuit against two police officers in Virginia who pepper-sprayed him[17] during a December 2020 traffic stop. One of the officers involved was fired[18], and the other was ordered to undergo retraining. The state attorney general is investigating the incident[19], in which Nazario says his constitutional rights were violated.

It is not yet clear how those lawsuits will address the possibility of the officers claiming – or being granted – qualified immunity. But those incidents and others like them have sparked intense debate[20] about whether, and under what circumstances, police officers should have qualified immunity.

Proponents say qualified immunity offers a balance between letting victims hold officials accountable and minimizing harm to society as a whole. Opponents say it serves as protection for wrongdoers that harks back to Jim Crow laws and is a vestige of racism that perpetuates unequal treatment before the law. 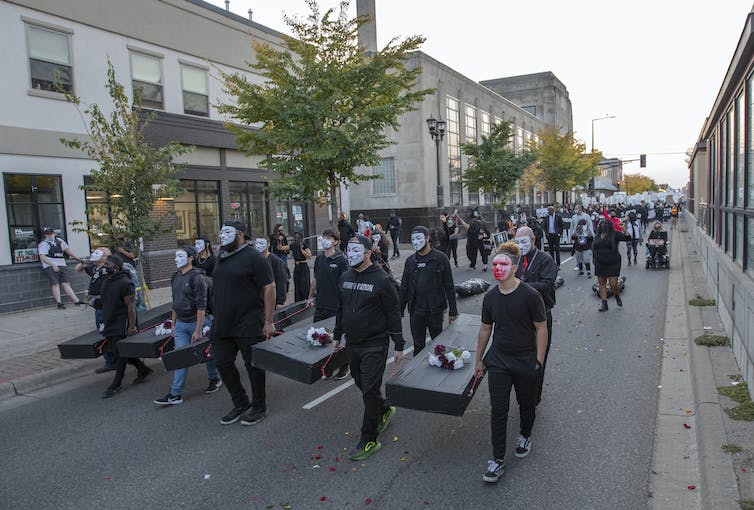 Family members of people killed by police in Minnesota march on the state’s Capitol building in October 2020 demanding better accountability for police violence, including an end to officers’ qualified immunity from civil lawsuits. Chris Juhn/Anadolu Agency via Getty Images[21]

A move to eliminate qualified immunity

Qualified immunity is a federal law construct; however, some states are already moving to do away with this type of legal protection for police officers. In June 2020, the state of Colorado did so, in direct response to George Floyd’s death[22] and the resulting protests. In August 2020, Connecticut took a similar step[23].

In March 2021, the New York City Council did the same[24] for its police department. New Mexico joined the growing movement[25] the following month.

At the federal level, the U.S. House of Representatives passed the George Floyd Justice in Policing Act[26] in March 2021, which in part seeks to limit the ability of police officers to claim qualified immunity as a defense in private lawsuits. The bill is now in the U.S. Senate for consideration. Similar laws are likely to spread across the country as Americans and their lawmakers examine whether qualified immunity for police does more harm than good.

[Over 100,000 readers rely on The Conversation’s newsletter to understand the world. Sign up today[27].]