The U.S. Space Force has a serious role to play in the modern world. Its stated mission is to train and equip personnel to defend U.S. interests in space. Given the increasing military and economic importance of space, the USSF is likely to grow in importance.

But a quick internet search shows that for most people, the Space Force is more a meme than a military branch. It has been the subject of jokes on “Saturday Night Live,” and Netflix was working on a comedy show[1] before the service was officially formed. None other than Captain Kirk himself, actor William Shatner, has weighed in, arguing for the use of Navy ranks over Air Force ranks[2] in the Space Force – after all, he wasn’t Colonel Kirk.

Given this relationship between science fiction and the USSF, few people take it seriously[3]. Modern pop culture depictions of the Space Force as a joke are distracting from the serious responsibilities the USSF is taking on. I am a space policy analyst who has studied the USSF’s relationship with science fiction[4], and my research shows this is creating a problem for the force. 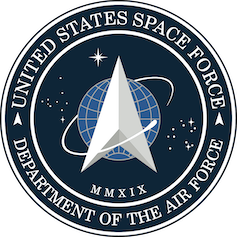 Many people have compared the U.S. Space Force seal to the insignia from Star Trek. US Space Force[5]

Sci-fi goes in, jokes come out

There are two things to think about in the relationship between today’s pop culture and the Space Force: how existing sci-fi entertainment warps perceptions of the new military branch, and how those misconceptions lead to a comedic framing of the Space Force in culture today.

Science fiction has long had a strong influence on how people perceive space, and this has carried over to the Space Force. Social media and news coverage of Space Force often include references to “Star Trek[6],” “Star Wars[7],” “Guardians of the Galaxy[8]” and “Starship Troopers[9].” This isn’t surprising. People naturally use analogies to understand new concepts[10]; it’s easier to understand new phenomena in terms of something you already know. Because the Space Force is a new service, people are turning to what they already know about fighting in space. The problem is that science fiction is far from the reality of what missions in space look like today.

A lot of research has explored how fiction can influence people’s thoughts and opinions[11]. One way this can happen is through something called a priming effect[12], where exposure to an idea in one situation influences how people think about the same idea in an entirely different situation.

People can also become so cognitively and emotionally invested in a fictional story that it begins to subconsciously feel real[13] to them. When this happens, it’s much easier for the fictional ideas to influence their thinking in the real world[14].

The result of science fiction’s influence, then, is that people have absorbed incorrect ideas about the Space Force – for instance, that it has its own astronauts or is building military bases on the Moon – without questioning the accuracy of these ideas. This leads to the second aspect of USSF’s relationship to pop culture today: Online commentary, media coverage and entertainment have focused on humor at the expense of substantive discussion.

Jokes about “Guardians of the Galaxy”[15] or camouflage in space[16] abound on Twitter and create the impression that the Space Force is inconsequential. The Netflix show “Space Force” has also perpetuated myths that the Space Force is sending astronauts into combat on the Moon. And this joking extends to the highest levels of government, too – even the White House has cracked jokes at the expense of Space Force[17]. 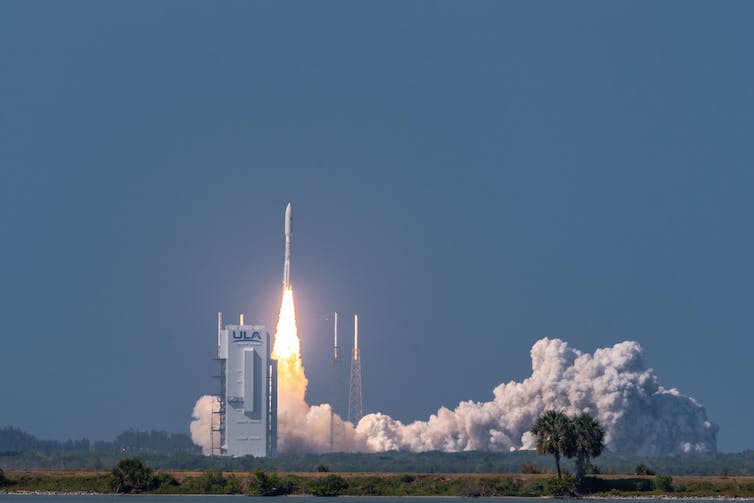 The first mission to space under the jurisdiction of the U.S. Space Force, a communications satellite launch, was not a ‘Star Trek’-style adventure, but it was still important. U.S. Air Force/Joshua Conti[18]

Despite the attention all this brings to the Space Force, if people are so deeply influenced by fiction that they find the USSF funny or absurd, it could lead to a disconnect between public expectations and what the Space Force is actually doing, and ultimately, reduce public support.

While missions like surveillance and tracking satellites and space debris may not be as interesting as stories from “Star Wars,” they are fundamental to the global economy and national security.

While the Space Force has fed these perceptions to an extent – for example, using the name Kobayashi Maru[19] from “Star Trek” for one of its software programs – there are ways in which science fiction can be helpful for the new military branch. Science fiction can be inspiring, as it was during the space race of the 1960s[20] and is for space leaders today[21].

[Over 100,000 readers rely on The Conversation’s newsletter to understand the world. Sign up today[22].]

Modern pop culture interest in space can also be used to leverage interest in the Space Force. While it is not engaging in any “Star Trek” sort of exploration, its duties are important and inspiring nonetheless. Without the GPS satellites[23] the Space Force is now in charge of, we wouldn’t be able to get money from an ATM, coordinate financial transactions or monitor such episodes as volcanoes or earthquakes.

The reality portrayed in “Star Trek” is hundreds of years in the future. While the Space Force might be an early step toward that reality; it is merely the first of many. As Gen. Mark Naird in the Netflix comedy series “Space Force” famously intones, “Space is hard.” Though not as glamorous as Hollywood, the hard work defending U.S. national interests in space is important.