The images[1] from the Jan. 6 siege on the United States Capitol will likely be seared into the memories of many Americans.

Photographs and video published in print, online and on television showed protesters breaking windows[2] to enter the building, sitting at a desk in House Speaker Nancy Pelosi’s office[3] and confronting[4] an outnumbered Capitol police force.

However, it may be the unpublished images that will be of most interest to law enforcement agencies as they track down[5] and arrest as many of the rioters as possible for breaking a range of laws[6]. The agencies may request or demand that news organizations turn over their unpublished material, which would force the media outlets to make uncomfortable choices.

Journalists argue[7] that if they are forced to reveal confidential sources or turn over any news information they have gathered but not yet published, it will erode the trust of sources and the public, who will doubt the independence that journalists often claim.

Journalists serve the public, not the government. But is the public better served by bringing criminals to justice than protecting a journalistic principle?

Many of the people who participated in the attack on the Capitol building have been identified and arrested, some with help from photos published[8] by the media and selfies[9] and videos[10] taken by the protesters.

As the search for more suspects continues, if authorities seek unpublished images from the news media and media outlets willingly cooperate, it could put journalists in greater danger when covering future protests. Protesters may see them as potential informants and physically attack them to avoid being identified later.

If the outlets resist and force authorities to issue subpoenas[11] for the images, it is unlikely to improve the media’s standing with a distrustful public[12] because it may appear the news organizations are obstructing justice. 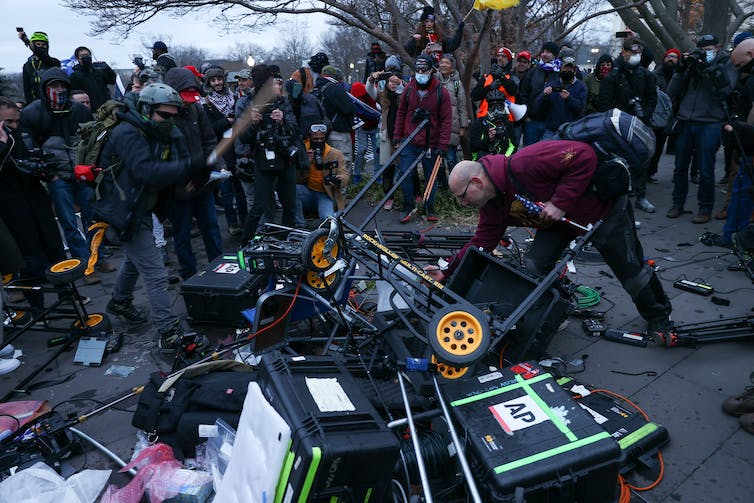 Covering unrest is always dangerous for journalists, but the situation at the Capitol was especially so.

The protesters were supporters of President Donald Trump, who has often referred to the media as the “enemy of the people[14].” Someone carved the words “Murder the Media”[15] into a door in the building, and news outlets lost thousands of dollars of equipment[16] when it was stolen and smashed by protesters.

During protests after George Floyd[17] was killed while being taken into police custody last summer, several reporters were injured[18] and possibly targeted by protesters and police officers.

In Seattle, police subpoenaed the Seattle Times and several television stations in June 2020 to obtain unpublished images from protests there to identify people suspected of criminal activity. The news organizations challenged the subpoenas in court under Washington state’s shield law[19], which protects journalists from being forced to name confidential sources or turn over unpublished information to state authorities. The Reporters Committee for Freedom of the Press filed a brief[20] supporting the news organizations’ position, in which it argued that enforcing the subpoena would jeopardize journalists’ safety as well as their editorial independence.

A judge ruled[21] against them. Police later dropped[22] the subpoenas because media appeals of the judge’s decision were likely to take too long to resolve. 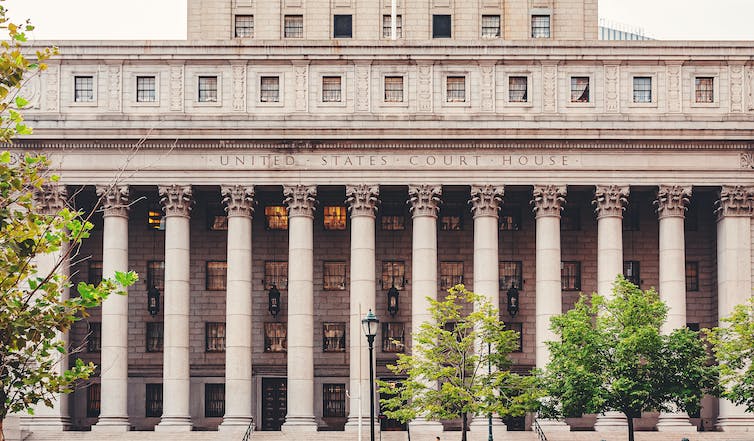 Because the Capitol siege happened on federal government property, the incident is being investigated[24] by federal authorities, meaning any court challenges to subpoenas would likely end up in federal court. This complicates matters.

Forty states have shield laws[25], but there is no federal shield law. In 1972, the U.S. Supreme Court ruled that journalists do not have a First Amendment[26] right to refuse to reveal sources’ identities in response to a valid grand jury subpoena.

The Branzburg v. Hayes[27] decision was so divided, however, that many lower federal courts have limited its reach[28] to grand jury situations. This means that journalists have a better chance of winning if they are subpoenaed to provide evidence in civil lawsuits or at criminal trials.

Given the seriousness of the Capitol incident, which led to five deaths[30], it would be difficult for journalists to successfully argue that their interests are more important than those of law enforcement.

I have been studying[31] the law regarding journalists and their sources for nearly 24 years. To my knowledge, U.S. journalists have rarely made the argument that they could face physical danger if they are forced to turn over information they have gathered. The closest parallel is a Washington Post reporter who successfully fought[32] a subpoena from a war crimes tribunal 20 years ago because of fears of retribution in foreign conflict zones.

One possible solution would be for news outlets to publish all images that have not already been published on their websites. That way, both the public and law enforcement agents would have access without a bruising legal battle over making the images available only to the police. A bonus would be that the public would have even more information about what happened.