In the many celebrations, reflections and histories of Plymouth colony, the settlement’s gender dynamics often get short shrift.

But not unlike today, men possessed power and privilege, women feared voicing their views and experiences, and the authorities debated how to respond to accusations of impropriety.

Original writings about the first New England settlement that I researched while writing my new book, “The World of Plymouth Plantation[1],” reveal that Plymouth dealt with sexual assault allegations in the early days of the colony.

In this one incident, a man named John Lyford[2] was found guilty of rape in Ireland and driven out of his community. This left him free to take his predatory ways to another place: Plymouth Plantation.

Much of what historians know about Lyford is contained in the key text about Plymouth, settler William Bradford’s handwritten account, “Of Plimoth Plantation[3].”

Lyford, an out-of-work Oxford graduate, arrived in Plymouth in 1622 with his family and servants. Their passage had been funded by the approximately 70 investors in England[4] who backed the Plymouth settlement.

Little was known of Lyford’s past other than the fact that he had held a position as minister to a Protestant church in Ireland. Nonetheless, he had high hopes for his new life in the New World: He expected to be employed as the community’s teacher and sought to one day be named the church’s minister.

In Plymouth, the church accepted Lyford as a member. At the time, he gave a seemingly heartfelt, if vague, confession of his sins, his desire for forgiveness and his wish to be received into the religious community. Bradford, who was present for the confession, wrote of how Lyford[5] made “an acknowledgment of his former disorderly walking, and his being Entangled with many corruptions, which had been a burthen to his conscience.”

Despite this auspicious beginning, Lyford was soon at odds with the settlement’s leaders. Because the church didn’t ultimately choose him as its minister, he decided to create a rival congregation that he could lead. He also wrote letters to the settlement’s investors criticizing the undertaking. Lyford depicted the leadership as hostile to the Church of England, intolerant of the religious views of others and bent on retaining power at any cost.

As a result of his complaints, a hearing in England took place in 1625 to consider the accusations. Investors, representatives of both Lyford and the colony, and an audience made up of various members of the public attended.

Afterwards, most investors withdrew their support of the colony. Why they did so is unclear. Either they were truly outraged at Lyford’s revelations or they were happy to have an excuse to stop sending money to the unprofitable enterprise.

But the outcome for Plymouth might have been much worse had Lyford’s past not caught up with him.

A predator is unmasked

Plymouth settler Edward Winslow[6], who represented Plymouth during the hearing in England, discovered that Lyford had a dirty secret.

From men friendly to Plymouth who were present, he learned that Lyford had lost his post in Ireland because of a sexual assault. One of Lyford’s parishioners had approached him for advice about his prospective bride, and he asked the minister if he thought her a worthy wife for a godly man. Lyford offered to meet with this woman – unnamed in the records – to assess her worthiness. During the private interview, he reportedly raped her. Afterward, he advised her prospective husband to wed her.

Once the couple was married, the bride revealed the minister’s attack, presumably to her husband, who then denounced Lyford. The church fired Lyford, and he slunk out of Ireland hoping to start anew.

But Lyford had more than this one incident to hide. While embroiled in his fight with the Plymouth leaders, his wife, Sarah, told her new friends that he routinely assaulted their maids. She confided that he would “meddle with them” as they slept at the foot of the couple’s bed. Maids, being young, unmarried serving women who lived in their employers’ households, were vulnerable, and colonial law courts took a dim view of anyone who attacked them[7]. 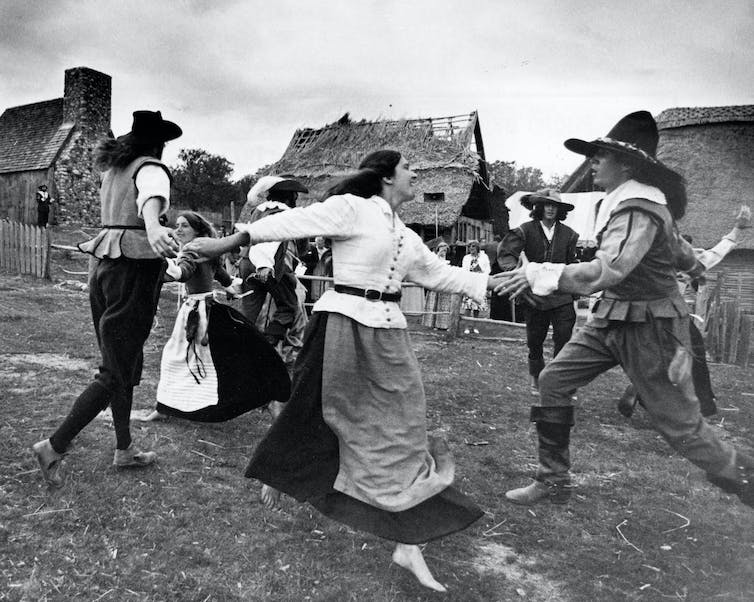 People in period clothing dance during a reenactment of life in Plymouth Plantation. John Blanding/The Boston Globe via Getty Images[8]

In addition, Sarah reported that Lyford lied to her before they married, denying rumors that he had fathered an illegitimate child. After they married – and she could not object because as a wife she was bound to obey her husband[9] – he brought the child into their household to live.

Lyford was far from being what Plymouth churchgoers would consider appropriate clergyman material; he was a rapist and a liar. Church members were grateful that they had not made him their leader, and, for this and other objectionable behavior, he was exiled from the settlement.

#MeToo, then and now

Today’s #MeToo movement[10] centers on women coming forward about violence they’ve been subjected to. They speak out about attacks by men who use their position of power to demean and assault them.

In the 17th century, women in Ireland, England and Plymouth rarely went public with their troubles[11]. But neither were they entirely silent.

The unnamed woman in Ireland told her husband what the minister had done, quite possibly after he found that she was not a virgin on their wedding night.

Sarah Lyford, after years of putting up with her spouse, finally described his predatory ways to her friends and to the Plymouth church’s deacon. The serving women whom Lyford assaulted remained silent, a course that was not unusual for girls and women caught in this situation, unless pregnancy forced them to reveal the truth.

Men in Ireland and Plymouth found Lyford’s vile acts especially shocking because he was supposed to be a man of God. The men in the Irish church acted decisively once his rape was revealed. They did not – as we sometimes see modern-day churches do[12] – accept his contrition and keep him on in his post. Instead, they swiftly fired him. The men of Plymouth wanted to be rid of Lyford for many reasons; in the end, they were glad that his reprehensible sexual assaults discredited him decisively.

In the case of Lyford, powerful men turned on a sexual predator and supported the women whom he wronged. In this case, his victims gained some justice.

But it’s also a reminder that then – as now – men’s support for the cause is often required to hold perpetrators of sexual assault to account.

[Deep knowledge, daily. Sign up for The Conversation’s newsletter[13].]