If you are one of the millions of people in the Midwest and Eastern U.S. who turned your gaze toward the sky recently, you may have noticed the Sun shining through an odd, milky haze. This widespread opaque veil was caused not by clouds, but rather by smoke from wildfires in the Western U.S.

The smoke was cruising by in the middle levels of the atmosphere many thousands of feet above the ground. While far too high to smell, it caused spectacularly hued sunsets from New York to D.C. to Missouri. 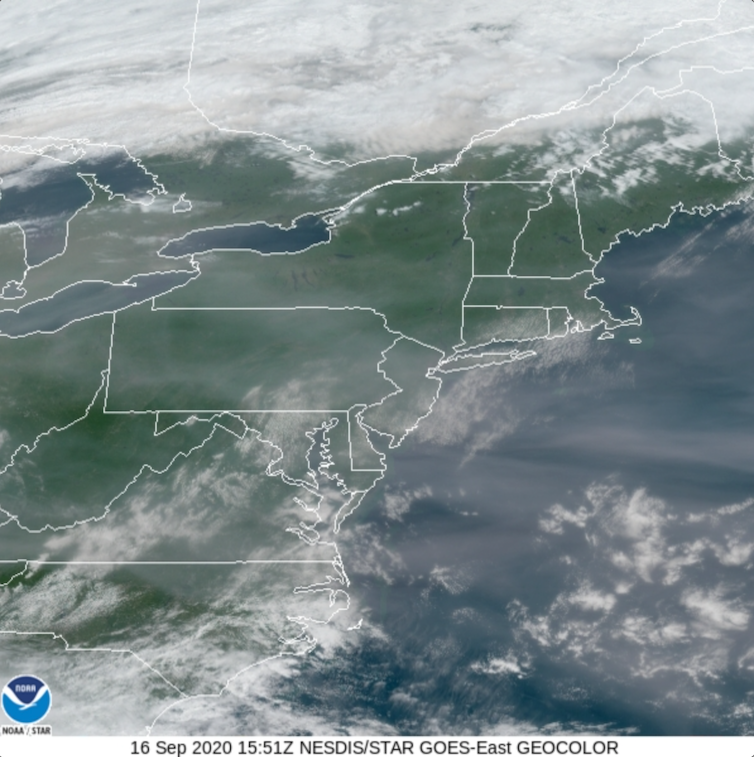 The thin haze, easily visible in this satellite photo over Pennsylvania and New York, is smoke that traveled over a thousand miles on air currents from the fires on the West Coast. NOAA[1]

Lasting for about a week from Sept. 12 to Sept. 19, the smoke could be seen in satellite images as wisps and patches of light gray and was especially apparent over the darkly contrasting water of the Atlantic.

Soot particles are much larger than air molecules and are more adept at scattering the yellow, orange and red wavelengths of sunlight[2]. The enhanced oranges, pinks and reds during sunset occur when the Sun’s rays have to travel through more smoke. That happens when the Sun is very low near the horizon rather than when it is directly overhead, hence the fiery sunsets.

The smoke on the East Coast is coming from the horrifically large and persistent wildfires[3] in the Western states. Smoke from those fires is showing up not only on the Eastern Seaboard, but even across the Atlantic in Europe[4].

How has all that smoke migrated so far? Blame this on the vagaries of the jet stream. 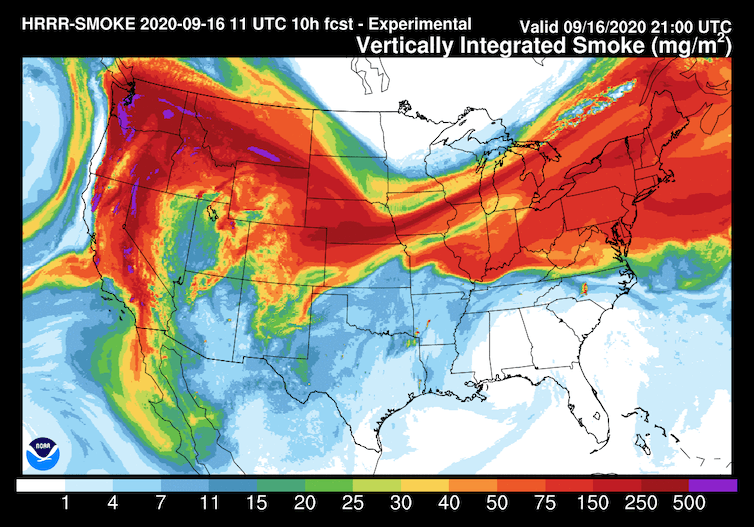 Smoke, highlighted by the darker colors, follows the course of the jet stream once it gets high enough into the atmosphere. NOAA[5]

In early September, the jet stream’s path abruptly dipped south, draping it through the Western states. When this happened, the air current picked up the rising plumes of smoke and transported them across the U.S. in a layer of air between 10,000 and 20,000 feet above sea level. As the smoke layer raced eastward at up to 100 mph, it spread over cities along the way – dimming the Sun and creating red sunsets.

Smoke isn’t the only aerosol that can sail around the Earth on wind currents. Pollution from China regularly travels to the U.S., where it’s been detected along the East Coast[6]. Fine dusts lofted from the Sahara Desert in Africa can be swept westward to the Southeastern U.S.[7], as happened just a few months ago.

After a week of hazy skies, a large air mass from Canada blew into the East Coast bringing in smoke-free air. But the Western U.S. fire season continues, and if the jet stream dips south again, the East could experience additional blasts of smoke-laden air. The globe may be vast, but wind currents connect us all.

[Deep knowledge, daily. Sign up for The Conversation’s newsletter[8].]