This year was supposed to bring great things for Guyana[1].

ExxonMobil discovered massive oil deposits off the South American country’s Caribbean coast in 2015, and Guyana sold its first cargo of crude oil this February. As production ramps up, its first stage offshore wells were projected to produce 750,000 barrels a day by 2025, tripling the size of Guyana’s economy[2], from US$3.4 billion to $13 billion[3].

Guyana also received its first U.S. secretary of state when Mike Pompeo visited on Sept. 17[4], reflecting both its rising international status as a major oil exporter and U.S. hopes that it will be an American partner in dealing with its troubled neighbor Venezuela.

But Guyana’s dreams of fabulous wealth this year have been dashed by COVID-19, which has delayed production and slashed oil demand. Compounding its coronavirus troubles, Guyana shows warning signs of the so-called “resource curse[5],” in which a country’s new oil wealth crowds out other productive economic sectors, breeds corruption and triggers political conflict.

If oil prices stay low, more countries could join the list of troubled petro-nations. My work on the link between the COVID-19 crisis, climate change risk, sovereign debt and oil[6] suggests a looming crisis.

Guyana, a former British colony with a population of 786,000, already struggles with political instability and ethnic tensions[7]. 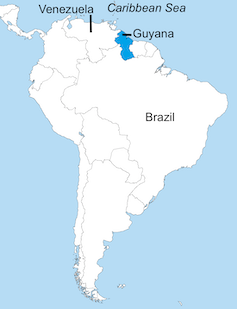 Earlier this year, in the first national election held since oil was discovered, accusations of corruption prompted a recount[10] and an unclear presidential result. The transfer of power dragged on for five months[11], leading to deep uncertainty, violence and eventually U.S. sanctions[12].

Ali campaigned on the issue of oil governance. Asserting that his predecessor David Granger had agreed to overly generous contracts with foreign oil investors, he promised to get Guyana its fair share of oil revenues.

So far, Ali has stopped short of saying his administration will retroactively change existing oil contracts, but calls for a review of terms have already delayed government approval for the next phase of offshore oil development[13], a holdup that is estimated to potentially cost Guyana over $1.6 billion[14] in lost oil revenue.

Meanwhile, the coronavirus pandemic has delayed the ramp-up of oil production, as safety concerns[15] prevented crews from going to work last spring.

The pandemic has also sapped oil demand worldwide, causing a glut of supply and ushering in stubbornly lower prices. That means new oil-producing countries like Guyana won’t likely see the economic windfalls[16] that other petrostates experienced in past decades.

Guyana is not the only oil-production nation facing an unexpectedly harsh political and economic reality.

Iraq, which experienced massive unrest in 2019 that led to a change in government[17], is expected to become a debtor nation[18] this year, as low oil prices and high budgetary needs are forcing it to deplete its entire $62 billion nest egg. Nigeria’s looming debt – which it needs high oil prices to service – will make it harder for the government to fight the terror group Boko Haram[19].

In the Middle East and Eurasia, $35 billion in maturing external sovereign debt is due this year. Meanwhile, Mexico’s national oil company, Pemex, has $30 billion in debt coming due by 2024[20] and no prospects of profits this year or even in 2021. Brazil’s Petrobras has a staggering debt load of $78.9 billion and a similarly dismal forecast[21].

The coronavirus didn’t cause these problems – government debt in oil-exporting countries has been on the rise since 2016[22] – but it could make them worse.

The pandemic has essentially created a self-fulfilling economic prophecy for some oil nations. Low oil prices mean governments must cut the budget of their national oil company to meet other more pressing fiscal, social and health needs. That will translate into less future oil production, which, in turn, further lowers the oil revenues these places depend on.

The longer the pandemic recession lasts, the more oil producers will face this grim fate.

Though its crude has barely left the ground, Guyana was counting on oil revenues to plug its budget deficit this year[23]. That may now prove impossible given the damage COVID-19 has done to its economy[24]. But if Guyana can resist the urge to pay today’s costs by borrowing against future oil receipts, it could yet ride out this crisis.

President Ali has promised to create a petroleum commission to ensure transparency for how Guyana’s oil revenues are spent and to prevent undue political interference in the oil and gas sector. Guyana, which has received refugees from crisis-stricken Venezuela, is well aware of what happens when oil wealth is not properly stewarded. 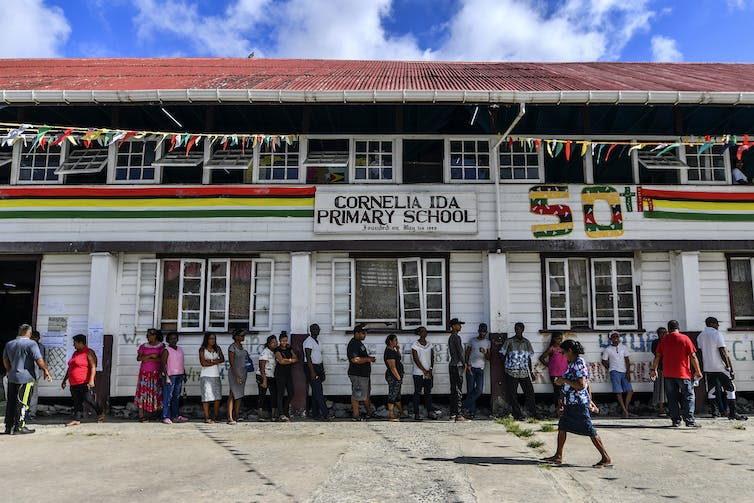 People line up to vote in Leonora, Guyana, on March 2 to decide which president will control its oil boom. Luis Acosta/AFP via Getty Images[25]

But surviving this year’s low oil prices is only the beginning. To thrive in the long term, Guyana will need to sink much of its oil earnings into building other sectors to avoid overdependence on one volatile source of revenue. This is especially key in a world that’s moving away from oil as its main energy source.

[Deep knowledge, daily. Sign up for The Conversation’s newsletter[26].]

The World Bank finds that very few petrostates have adequately diversified their economies[27]. Exceptions include Malaysia and Dubai, which have both used oil wealth successfully to build a broader economic foundation and have avoided the dreaded “resource curse.”

Those countries will be models for Guyana, if can just get through 2020 first.