Ahead of the 75th anniversary year of the atomic bombings of Hiroshima and Nagasaki, Pope Francis visited both cities.

At a solemn event at the Hiroshima Peace Park[1] in November 2019, Francis declared the use of atomic energy for war to be “a crime not only against the dignity of human beings but against any possible future for our common home.” “How,” he asked, “can we speak of peace even as we build terrifying new weapons of war?”

His comments came nearly 40 years after John Paul II became the first pope to visit the site of the atomic bomb attacks, which pulverized the two cities on Aug. 6 and 9, 1945 and killed in excess of 200,000 in the process[2].

During his visit, Francis reiterated what he previously told assembled Nobel Peace Prize laureates, diplomats and civil society representatives at a Vatican symposium in 2017, that nuclear weapons, along with chemical weapons and landmines, were impermissible. “The threat of their use, as well as their very possession, is to be firmly condemned,” he said.

We were at that 2017 symposium – Fr. Christiansen was a participant – and we later co-edited a book of testimonies from that landmark event, titled “A World Free from Nuclear Weapons: The Vatican Conference on Disarmament[3].”

As scholars who study how the Vatican’s position on nuclear arms has evolved, we see an ongoing role for the Catholic Church in providing moral guidance on the issue. A year after the Cuban Missile Crisis in 1962[4], during which the U.S. and the Soviet Union came perilously close to nuclear conflict, Pope John XXIII published the encyclical “Pacem in terris” – translated as Peace on Earth – in which he argued for balanced reduction of nuclear weapons leading ultimately to abolition.

In 1965, bishops at Vatican II, while contemplating nuclear war, urged in the pastoral constitution document “Gaudium et spes” – translated as Joy and Hope – that, “Whatever may be the case with deterrence…the arms race…[will not] preserve a sure and authentic peace.”

Pope John Paul II conditionally accepted deterrence in a 1982 address to the U.N. General Assembly. He wanted abolition and disarmament, but was constrained by the politics and technology of the day. The Cold War was still raging, and the Vatican accepted, albeit reluctantly[5], nuclear deterrence – the concept of keeping weapons to stop others from using them – rather than outright abolition at that time. Some 30 years later, in a changed global reality, the Vatican foreign minister told the U.N. that deterrence was the chief obstacle to disarmament, setting up the position of the Vatican today.

In 2017, the Holy See became one of the first signers of the U.N. Treaty on the Prohibition of Nuclear Weapons. Article 1 prohibits signers to “develop, test, produce, manufacture, otherwise acquire, possess or stockpile nuclear weapons…” This was the backdrop for Pope Francis’ historic condemnation of deterrence and call for disarmament later that fall. 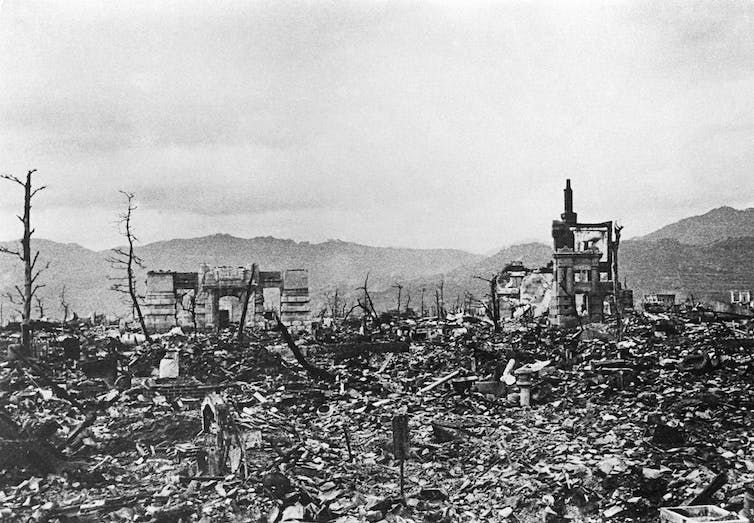 Hiroshima’s city center after the explosion of an atomic bomb on Aug. 6, 1945. Paolo KOCH/Gamma-Rapho via Getty Images[6]

One hundred and twenty-two nations voted for the Treaty on the Prohibition of Nuclear Weapons. For its labors on behalf of the treaty, ICAN, the International Campaign Against Nuclear Weapons[7], an umbrella group of civil society opponents of nuclear weapons, won the 2017 Nobel Peace Prize.

But the guidance provided by the Catholic Church is not simply through official statements and positions from the top.

Across the church, various groups have long campaigned for abolition of nuclear weapons. Catholic nuns have often been at the forefront of this work[8]. In Japan, several activist hibakusha[9] – survivors of Hiroshima and Nagasaki – are sisters of Notre Dame de Namur and the Society of the Helper of Holy Souls, among other congregations.

In the U.S., Sister Jennifer Kane was a nuclear engineer before realizing[10], in the words of her congregation in 2019, “that God was calling her to a more spiritual combat” as an antinuclear activist.

And Dominicans, Religious of the Sacred Heart, and Society of the Holy Child Jesus have participated in the grassroots anti-nuclear direct-action movement Plowshares[11], at times resulting in prison time for activist nuns.

This willingness to speak out against nuclear violence is consistent with Pope Francis’ example. He offers a style of moral deliberation that calls for discernment, not blind obedience. Francis has urged those who work in the nuclear field to educate themselves, preferably accompanied by a spiritual adviser, and explore alternatives in line with their conscience[12].

This creative exercise in moral responsibility is for anyone, religious or not. It is reflected in the work of the Project on Revitalizing Catholic Engagement on Nuclear Disarmament[13] – a body co-sponsored by, among others, The University of Notre Dame, Georgetown University, The Catholic University of America, and the Catholic Peacebuilding Network.

Church teaching demands that conscientious officials and nuclear workers resist orders they deem to be immoral[14].

The Second Vatican Council of the early 1960s taught that obeying orders is no excuse for participating in atrocities, and urged anyone, whether top military leader or rank-and-file citizen, to display “the courage of those who openly and fearlessly resist.”

[Deep knowledge, daily. Sign up for The Conversation’s newsletter[15].]

Indeed, in 2018 two chiefs of the U.S. Strategic Air Command testified in a Senate hearing that they would not comply with illegal orders to deploy nuclear weapons, and that they would offer civilian authorities alternative courses of action to pursue.

There may be more than one right answer for those of us who are called to respond to the moral challenge of nuclear weapons.

But 75 years on from the destruction of Hiroshima and Nagasaki, the Vatican gives us clear moral guidance that disarmament is possible, and for all of us, religious or secular, its time has long since come.