Gold is everywhere in modern life, from jewelry to electronics to smartphones. The global electronics industry alone uses 280 tons[1] annually. And that demand keeps growing.

But most people know little about the environmental impacts of gold mining. About 15% of world gold production is from artisanal and small-scale mining[2] in over 70 countries throughout Asia, Africa and South America. These operations employ 10 to 19 million workers[3]. They often are poorly policed and weakly regulated.

Artisanal mining might sound quaint, but it is usually criminal activity and results in widespread environmental damage. It also is the largest source of mercury pollution in the world today[4], far exceeding other activities such as coal combustion and cement manufacturing. While mercury is an element that occurs naturally in the Earth’s crust, it has many toxic effects[5] on humans and animals, even at very low exposure levels.

We have studied mercury pollution from artisanal gold mining[6] for the past five years. The extraction methods that these operations use today are not drastically different from processes that miners employed in the California gold rush in the mid-1800s. Today we see history repeating itself in places like the Peruvian Amazon, where small-scale gold mining threatens to leave behind long-lasting social, economic and environmental consequences.

Mercury has been used for centuries as an inexpensive and easy way to collect gold. The process begins when miners pump a mixture of water and sediment from a riverbed into a trough, where the sediment can be suspended into a slurry – a technique known as hydraulic mining.

Next they add mercury, which binds to the gold particles, forming an amalgam. Mercury is heavier than pure gold, so the balls of amalgam sink to the bottom of buckets or holding ponds where they can be collected. Finally, workers burn off the mercury – often with a hand torch or in a crude stove – leaving gold metal behind.

This process releases mercury to the environment in two forms. First, tailings, or waste material, can contaminate nearby land and aquatic ecosystems[7]. Second, mercury vapor enters the atmosphere and can travel long distances[8] before being deposited to land and water via rainfall or small dust particles.

In the environment, microbes can transform mercury into a more potent form known as methylmercury. Methylmercury can be taken up by bacteria, plankton and other microorganisms that are then consumed by fish and build up to dangerous concentrations in animals higher on the food chain. 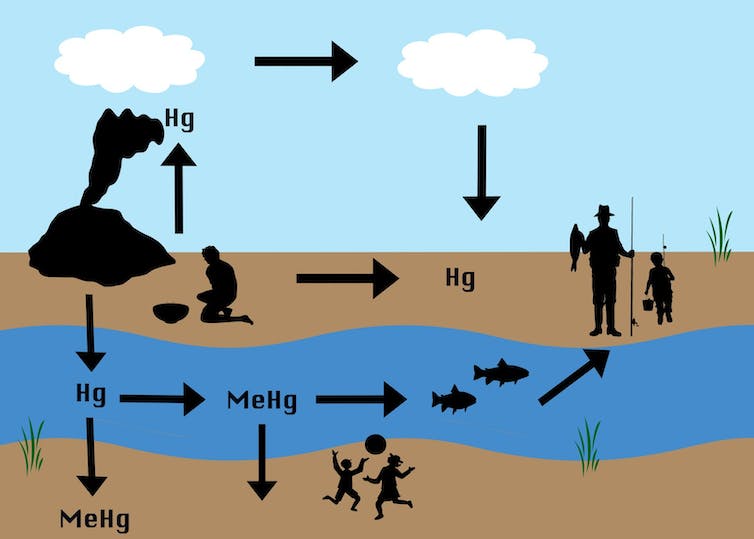 When artisanal gold miners burn mercury, it is released into the atmosphere and can end up on land or in water. Mining tailings (solid waste) also deposit mercury onto land or into water. Microbes in the environment can convert mercury into methylmercury, which can be taken up by living organisms, including fish and people. Arianna Agostini, Rand Alotaibi, Arabella Chen, Annie Lee, Fernanda Machicao, Melissa Marchese, CC BY-ND[9]

Methylmercury is a potent neurotoxin that is harmful to humans and wildlife, such as endangered giant otters[10] that feed high on the food web within these contaminated environments. It can cause severe central nervous system damage that results in sensory and motor deficits, as well as behavioral impairments such as difficulty swimming in aquatic animals and flying[11] in birds.

A lasting legacy in California

During the U.S. gold rush, hydraulic mining operations in California[12] completely denuded forested landscapes, altered the course of rivers, increased sedimentation that clogged river beds and lakes and released enormous amounts of mercury onto the landscape. California wildcat miners used an estimated 10 million pounds[13] of mercury from the 1860s through the early 1900s. Most of it was released to the environment as tailings and mercury vapor. 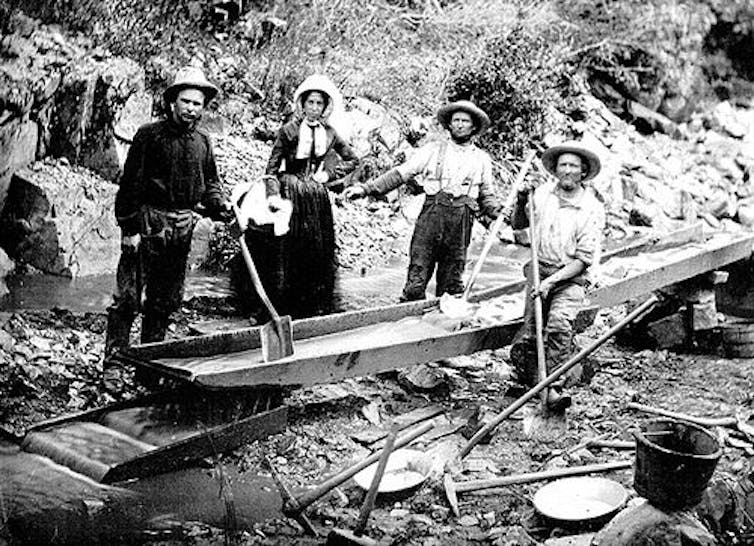 Panning for gold in California, 1850. Unknown/Wikipedia[14]

A century later, water, soil and sediments in the Sierra Nevada region still have high concentrations[15] of mercury and methylmercury, often exceeding thresholds set by the U.S. Environmental Protection Agency. Studies show that fish[16], birds and other organisms living near historically mined sites in California have high mercury concentrations in their bodies compared to those inhabiting nearby unmined landscapes. Extreme erosion on mountain slopes can continuously mobilize mercury deposited decades ago[17].

Like men who traveled to California in 1849 hoping to strike it rich, today’s artisanal miners around the world are mainly low-skilled workers hoping to support themselves and their families.

In Peru, where we have studied this process, artisanal miners produce an estimated 35,000 to 40,000 pounds[18] of gold per year. The industry offers an opportunity for upward mobility for substantial numbers of Peruvians[19], who generally migrate to mining sites from coastal and mountain towns.

As a result, gold rush towns have boomed over the past 20 years. The Inter-Oceanic Highway[20], which was completed in 2012 and runs from Brazil’s Atlantic coast to Peru’s Pacific coast, has connected these towns to larger cities and increased access to the Peruvian Amazon.

Producing a pound of gold requires about 6 pounds of mercury. Given that at least 50% of the mercury used in these operations is lost to the environment, we estimate that artisanal gold mining in Peru alone releases nearly 50,000 pounds of mercury annually.

Mining in this region is producing impacts that are strikingly similar to the hallmarks of the California gold rush. For example, miners in the Peruvian Amazon have cleared more than 250,000 acres of forest[21] since 1984.

The Madre de Dios River, which runs through a zone that has seen substantial mining, will likely continue to erode the landscape, carrying mercury-laden particles downstream. Long-lasting mercury contamination in this region threatens the highest biodiversity on the planet[22] and many indigenous communities. 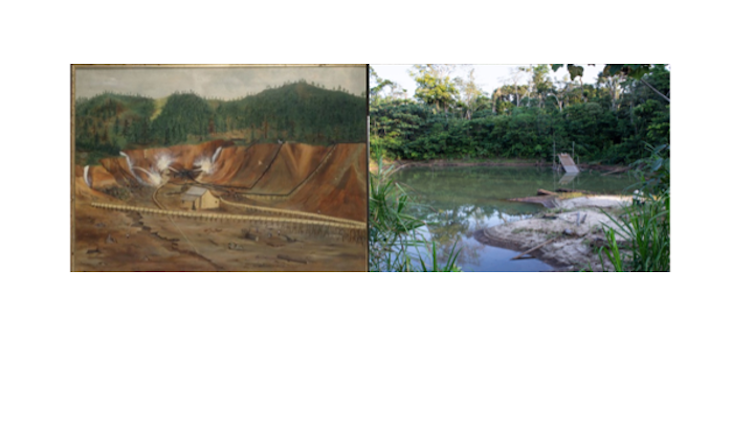 Gold mining in 19th-century California sparked a wave of western migration[23] and helped drive settlement of what we now refer to as the western United States at a time when mining and environmental pollution were unregulated. Today, use of mercury in artisanal gold mining is regulated by the 2013 Minamata Convention on Mercury[24], which has been signed by 128 countries – including Peru. Yet there is little on-the-ground regulation in most countries. Nor have governments addressed legacy pollution and deforestation from gold mining.

Illegal artisanal gold mining is a major source of income for local communities in places like the Madre de Dios region of Peru. As long as people all over the world continue to demand more gold, we believe that they are just as responsible as miners and local policymakers for the environmental degradation gold mining causes.

[You’re smart and curious about the world. So are The Conversation’s authors and editors. You can get our highlights each weekend[25].]