President Donald Trump has called the coronavirus an “invisible enemy[1]” that’s “brilliant[2]” and “tough and smart,” adding that we are “tougher and smarter[3].”

CNN host Chris Cuomo, recovering from the virus, attributed malicious intent to it, saying it “wants us to lay down[4].” He warned his audience not to cooperate.

Speaking of the coronavirus as if it were a person, then, is common. But why do we all do it, despite knowing that the virus is just a tiny bundle of inanimate genetic material?

As cognitive[11] scientists[12] who study the human mind we suggest that this tendency to see human features everywhere[13] is an innate human characteristic, one that automatically alerts you to signs of other people – and helps you make sense of a confusing world.

Attributing human characteristics to nonhuman things and events is called anthropomorphism or personification. Philosophers and psychologists suggest that it is a human universal, found among all of us, regardless of culture or upbringing. For instance, philosopher David Hume[14] wrote in the 18th century that “We find human faces in the moon, armies in the clouds; and… ascribe malice or good-will to every thing, that hurts or pleases us[15].” Most recently, people find “enemies” in viruses.

They do so, Hume wrote, because the world is complex and unpredictable, and often threatens you with unexpected calamities such as earthquakes, floods and plagues. In order to predict and control these dangers, he said, people want to understand their causes, but often cannot. Baffled, they resort to the most familiar explanations, those based on their own experiences and those of other people.

This habit often results in the mistake of thinking you see persons, or features of persons, where they don’t exist, as with the new virus. But having a human-like model–indeed, having any model–to apply to such a mysterious, invisible and dangerous entity as the coronavirus provides some measure of apparent control, and thus comfort.

And although people may not consciously believe that the coronavirus is like a person, their language and behavior suggest that they do so unconsciously. 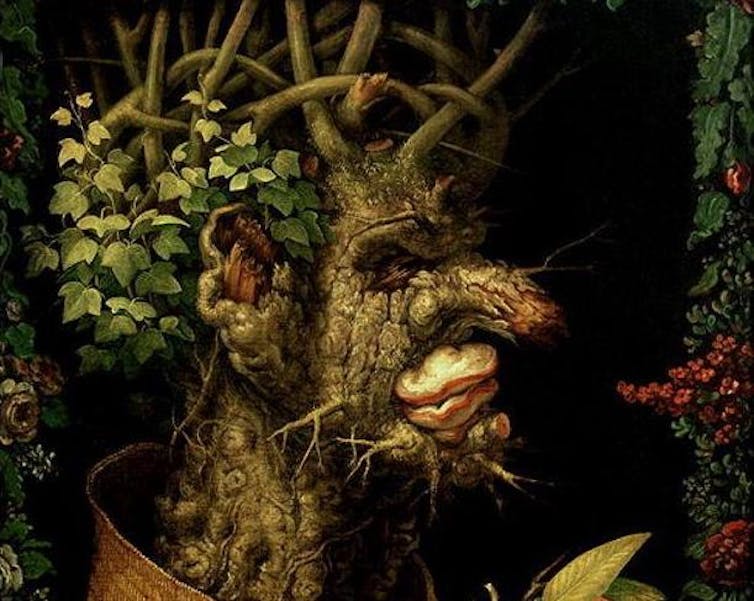 The assumption that persons and features of persons may be present is spontaneous and irrepressible. For example, 16th-century Italian artist Giuseppe Arcimboldo painted a series of faces[20] composed of various objects. In one work, “Winter,” you can’t help seeing a face in a tree stump, perhaps reflecting a face that the artist had imagined in a real stump. It is virtually impossible not to see the face emerging from Arcimboldo’s assemblage of objects.

The upside of anthropomorphizing

Interpreting many phenomena as human in origin is the safest bet, while dismissing them as irrelevant may be dangerous if you’re wrong.

When you find possible traces of humans – faces in stumps, voices in the wind or footsteps in a house’s creaks – it opens a wide repertoire of important possibilities. Is it an enemy who might harm me? A friend who will comfort me?

Thus, a high sensitivity to human-like features and a low threshold for deciding they are present have evolutionary advantages. Their disadvantage is that you’re often mistaken, when no human feature is really there. But most such mistakes are less consequential than missing someone you need to see, whether friend or foe.

Humans, then, are a special stimulus for us, and cognitive neuroscience provides further evidence of it. For example, infants are born ready to recognize a face[21] – or anything resembling one[22] – and by a few months of age, infants prefer a block that “helps”[23] another block up a slope to one that “hinders” it. So babies are born ready to see shapes as human anatomy, and quickly see even inanimate objects as having social relationships. People never outgrow this tendency, and throughout life see aspects of ourselves in cliff “faces,” river “mouths” and mountain “majesties,” and purpose and meaning everywhere. 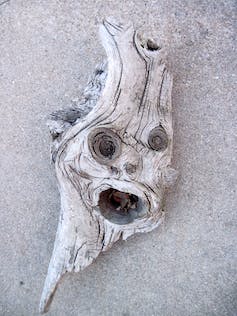 Nietzsche wrote of his ‘belief in intention… that every event is a deed, that every deed presupposes a doer….’ Stewart Guthrie, CC BY-ND[24]

Scanning for human features in the environment – and ending up anthropomorphizing – appears built into human beings. It is supported by what neuroscientists call the social brain, an evolved “person network[25].”

This brain network is activated by any stimulus that even suggests a person, such as a stick figure[26] or emoji[27]. For instance, part of this network, the fusiform face area, responds both to a human face [28]and to anthropomorphized car headlights[29], grill and bumper.

No wonder it’s so easy to talk about the coronavirus as human-like. Anthropomorphic narratives provide models of the virus and its behavior that feel familiar and accessible. They’re a way to grasp these unseen beings, and this grasp, illusory or not, provides a bit of the confidence and sense of control so crucial to mental well-being[30].

[You need to understand the coronavirus pandemic, and we can help. Read The Conversation’s newsletter[31].]