Just as America’s trade war with China may be winding down, its troubles with Europe seem to be growing.

On Oct. 11, President Donald Trump said that the United States and China had agreed[1], in principle, to “phase one” of a trade deal. Although the details are murky, the deal appears to suggest small wins for both sides and a cessation – for now – in tariff escalation.

Three days later, the U.S. imposed US$7.5 billion of sanctions[2] on European Union products – such as Scotch whiskey and French cheese – to protest the EU’s subsidies of aviation giant Airbus.

But there is one notable difference between these two conflicts.

Trump has been managing the dispute with China largely outside the international legal framework regulating trade. Though he has employed various justifications for his actions, many experts agree[3] that they violate international law. By contrast, Trump’s European tariffs were sanctioned by the World Trade Organization. They are thus indisputably legal.

As a scholar of trade policy[4], these two simultaneous moves – one outside international law and the other inside it – fascinate me. They show that Trump’s approach to trade is not so much anti-establishment as it is opportunistic.

A tale of two trade talks

The deal with China, which that country hasn’t yet formally endorsed, appears to include[5] a promise by Beijing to purchase up to $50 billion of additional U.S. agricultural products and to revisit its foreign investment and intellectual property laws.

In return, the White House has suspended the imposition of its threatened tariff hikes, which had been due to take place on Oct. 15.

Trump claims to have achieved more success with his aggressive stance during the 18-month trade war than prior presidents could boast when playing by the rules. It is ironic, then, that his trade sanctions against Europe resulted from over a decade of work[6] by previous administrations and stuck to the book.

The United States has long maintained that European countries subsidize Airbus, while the European Union has claimed that Washington uses defense spending to do the same for Boeing. The EU may soon get permission from the WTO to impose its own trade sanctions on U.S. products if that case goes the way it is expected to[7]. 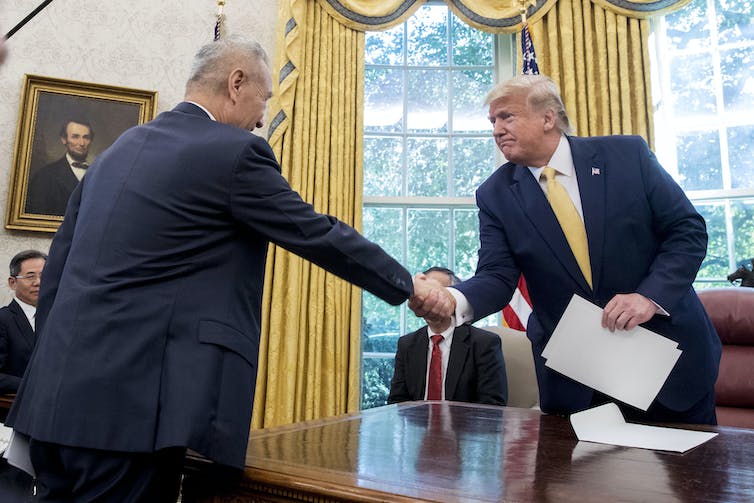 So why is the U.S. following the rules in one case but flouting them in another? Put simply, I believe Trump is “forum shopping.”

Forum shopping is a term coined by international relations theorists[8] to explain why countries use varying international organizations, or none at all, to conclude similar deals. In all sorts of policy areas, these theorists argue[9], states will choose to negotiate in forums that they believe will stack the odds in their favor.

That’s why the U.S. chose to work within the rules on Europe – it knew they were on its side – but beyond them in dealing with China.

In the Europe dispute, the issue is quite definable: The EU’s Airbus subsidies are a likely violation[10] of global trade rules.

For this reason, the administration has evidently concluded that the smart approach is to follow through with the legal process.

The China dispute is different. It encompasses a wide range of issues – from intellectual property theft to currency manipulation – that would be difficult to adjudicate comprehensively. More to the point, the key Trump complaint – the trade imbalance[11] – is not in itself even a violation of international trade law.

The legal route would have taken a long time and may well have gone nowhere. Given Trump’s political need to confront China, such an approach was too risky to consider.

But forum shopping has costs.

When even the principal architect of the international trading rules – the United States – only appeals to those rules in search of its own interests, the system’s legitimacy[12] is eroded.

Why should Americans care?

There is a reason that the development of an international trading system has been backed by Washington for seven decades – it is extremely useful.

Having a level playing field in trade, based on clear rules, open information and non-discrimination has played a key role[13] in American, and global, economic growth. It has also encouraged interdependence and reduced conflict[14]. Chucking that system for a quick result as Trump has done in the case of China is a mistake.

Ultimately, for legal norms to function, I believe leading players like the U.S., China and the EU must all adopt a more enlightened, long-term view of their interests. They must be willing to recognize the authority of international rules even if they are tempted to ignore them in individual cases.

Let’s hope that future presidents will take a broader view and recognize America’s interests in a rule-based, cooperative international system, both in the trade arena and beyond.

[ Deep knowledge, daily. Sign up for The Conversation’s newsletter[15]. ]