Most people are familiar with optical lasers through their experience with laser pointers. But what about a laser made from sound waves?

What makes optical laser light different from a light bulb or the sun is that all the light waves emerging from it are moving in the same direction and are pretty much in perfect step with each other. This is why the beam coming out of the laser pointer does not spread out in all directions.

In contrast, rays from the sun and light from a light bulb go in every direction. This is a good thing because otherwise it would be difficult to illuminate a room; or worse still, the Earth might not receive any sunlight. But keeping the light waves in step – physicists call it coherence – is what makes a laser special. Sound is also made of waves.

Recently there has been considerable scientific interest in creating phonon lasers in which the oscillations of light waves are replaced by the vibrations of a tiny solid particle. By generating sound waves that are perfectly synchronized, we figured out how to make a phonon laser[1] – or a “laser for sound.”

In work we recently published in the journal Nature Photonics[2], we have constructed our phonon laser using the oscillations of a particle – about a hundred nanometers in diameter – levitated using an optical tweezer. 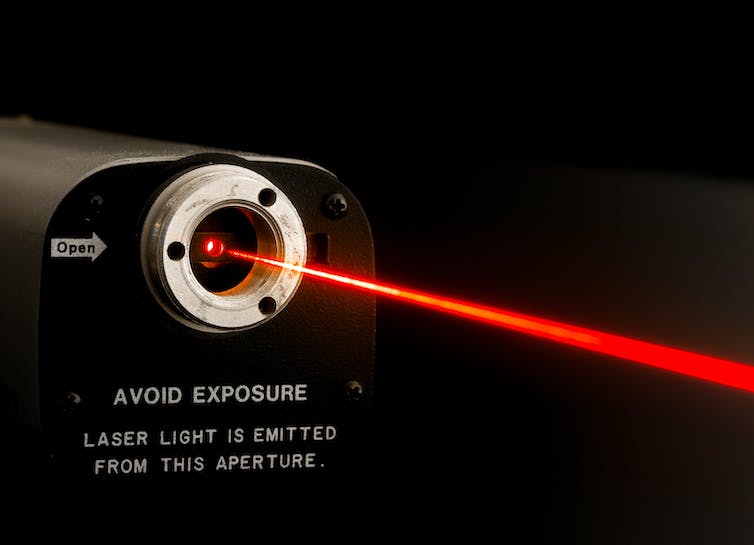 An optical tweezer[4] is simply a laser beam which goes through a lens and traps a nanoparticle in midair[5], like the tractor beam in “Star Wars.” The nanoparticle does not stay still. It swings back and forth like a pendulum, along the direction of the trapping beam.

Since the nanoparticle is not clamped to a mechanical support or tethered to a substrate, it is very well isolated from its surrounding environment[6]. This enables physicists like us to use it for sensing weak electric, magnetic and gravitational forces whose effects would be otherwise obscured.

To improve the sensing capability, we slow or “cool” the nanoparticle motion. This is done by measuring the position of the particle as it changes with time. We then feed that information back into a computer that controls the power in the trapping beam. Varying the trapping power allows us to constrain the particle so that it slows down. This setup has been used by several groups around the world in applications that have nothing to do with sound lasers. We then took a crucial step that makes our device unique and is essential for building a phonon laser.

This involved modulating the trapping beam to make the nanoparticle oscillate faster, yielding laser-like behavior: The mechanical vibrations of the nanoparticle produced synchronized sound waves, or a phonon laser.

The phonon laser is a series of synchronized sound waves. A detector can monitor the phonon laser and identify changes in the pattern of these sound waves that reveal the presence of a gravitational or magnetic force.

It might appear that the particle becomes less sensitive because it is oscillating faster, but the effect of having all the oscillations in sync actually overcomes that effect and makes it a more sensitive instrument. 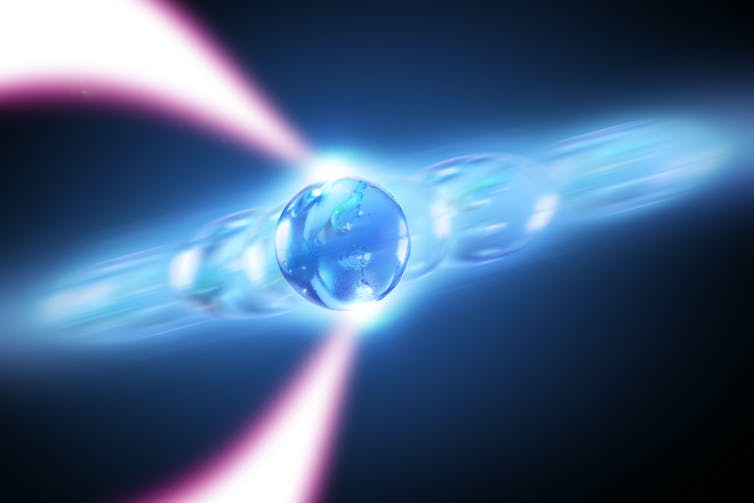 An artist’s depiction of optical tweezers (pink) holding the nanoparticle in midair, while allowing it to move back and forth and create sound waves. A. Nick Vamivakas and Michael Osadciw, University of Rochester illustration, CC BY-SA[7]

It is clear that optical lasers are very useful. They carry information over optical fiber cables, read bar codes in supermarkets and run the atomic clocks which are essential for GPS.

We originally developed the phonon laser as a tool for detecting weak electric, magnetic and gravitational fields, which affect the sound waves in a way we can detect. But we hope that others will find new uses for this technology in communication and sensing, such as the mass of very small molecules.

On the fundamental side, our work leverages current interest in testing quantum physics theories about the behavior of collections of billion atoms – roughly the number contained in our nanoparticle. Lasers are also the starting point for creating exotic quantum states like the famous Schrodinger cat state[8], which allows an object to be in two places at the same time. Of course the most exciting uses of the optical tweezer phonon laser may well be ones we cannot currently foresee.