Prisoners in 17 states and several Canadian provinces[1] are on strike in protest of prison labor conditions.

Their demonstrations are compelling Americans to understand that some everyday foods are produced behind bars, for cents on the hour, in a system many call “modern slavery[2].” Prisoners in the U.S. harvest and process eggs[3], orange juice[4], ground beef[5] and fish[6]. They also staff call centers, fight wildfires and make sugar.

For this work, they receive, on average, 86 cents a day[7], according to the Prison Policy Initiative, an advocacy group.

Some formerly incarcerated people disagree[8] with the comparison of prison work to slavery, saying that prison jobs teach real skills that may reduce recidivism.

But the prisoners’ strike, underway since Aug. 21, shines a light on a troubling American habit of consuming, often thoughtlessly, the products of forced labor.

Slavery and its consequences

Until Emancipation in 1865, enslaved Africans and African-Americans furnished many of the everyday items early Americans enjoyed, from cotton and tobacco to flour and sugar.

Between 1776 and 1865, an estimated 7.5 million unpaid black workers toiled out of sight, in slave labor camps[9] – also known as plantations – railroads, households and factories across the South.

Slavery was not confined to the South: New York did not outlaw it until 1827.

As my research on forced labor and industry in early America[10] reveals, slave-made goods were everywhere in the early United States: in coffee, swaddling clothes, chewing tobacco, bread and even banknotes.

Take chewing tobacco, for example, the “filthy custom[11]” that Charles Dickens found ubiquitous during his 1842 visit to the U.S. The English novelist was aghast to see on his tour of a Virginia tobacco factory hundreds of enslaved workers pressing tobacco under the lash of overseers.

Enslaved workers, including women and children, pulled 16-hour shifts in these dusty and dangerous factories. The leaf they processed there was grown, cut and cured by other enslaved people in Virginia, North Carolina, Maryland and Kentucky.

This violent system of keeping black people impoverished and in bondage made tobacco remarkably affordable to free people. In the mid-19th century, the equivalent of a can of smokeless tobacco cost just 50 cents in today’s dollars.

Virginia tobacconists got rich selling their cheap tobacco plugs and twists in the U.S., Europe and Australia – even to the U.S. Navy[12]. 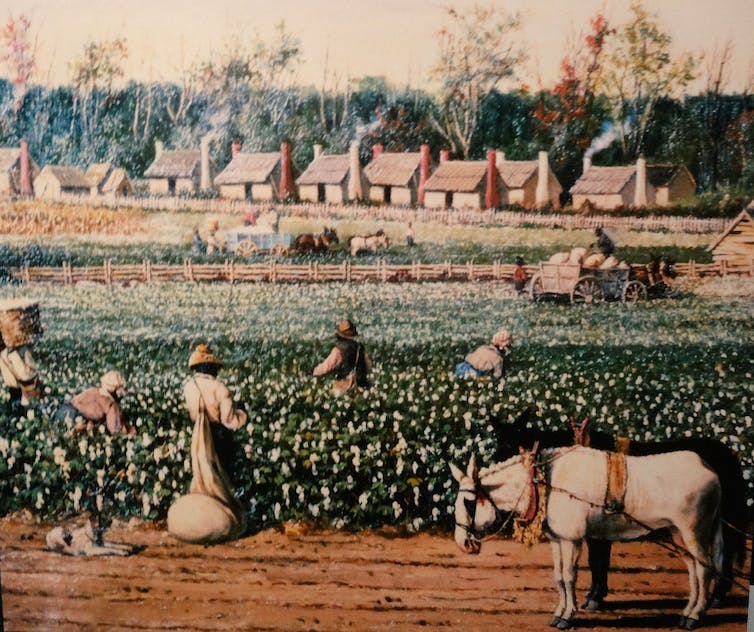 Cheap American cotton was shipped to Great Britain via New York, and imported back to the U.S. as clothing, enriching everyone but the enslaved workers who picked it. Fort Sumter Museum Charleston via flickr/denisbin, CC BY-ND[13][14]

As a result, slavery fueled inequality in the southern U.S., depressing the wages of white workers and freed blacks while making a small elite very rich.

According to economists Peter Lindert of U.C. Davis and Jeffrey Williamson of Harvard[15], in the eight decades before the Civil War, the top 1 percent of earners doubled their income, while the bottom 40 percent of earners lost half of theirs.

In 1860, the Gini coefficient[16] – which measures unequal wealth distribution – was 0.608 in most states below the Mason-Dixon line, which today would make it one of the world’s least equal places[17]. Average inequality in U.S. at the time was much better – 0.511 on the Gini index, roughly equivalent to modern Colombia.

The northern bankers and dealers of slave-made goods also pulled ahead of other earners.

Cotton picked by enslaved workers was shipped to New York City, where it was sold to English and European factories. By 1860, cotton accounted for 61 percent of U.S. exports[18], and American cotton made up 80 percent of British cotton imports.

Nearly every person in the Atlantic world in the mid-19th century who sweetened their coffee did so using sugar harvested by enslaved people in Louisiana[19], the West Indies or Brazil.

Their coffee, much of it from Brazil, was grown by enslaved people, too[20]. Since Brazil was the last country in the Americas to abolish slavery, in 1888, that would continue to be the case continued for decades after the 13th Amendment outlawed slavery in the U.S. 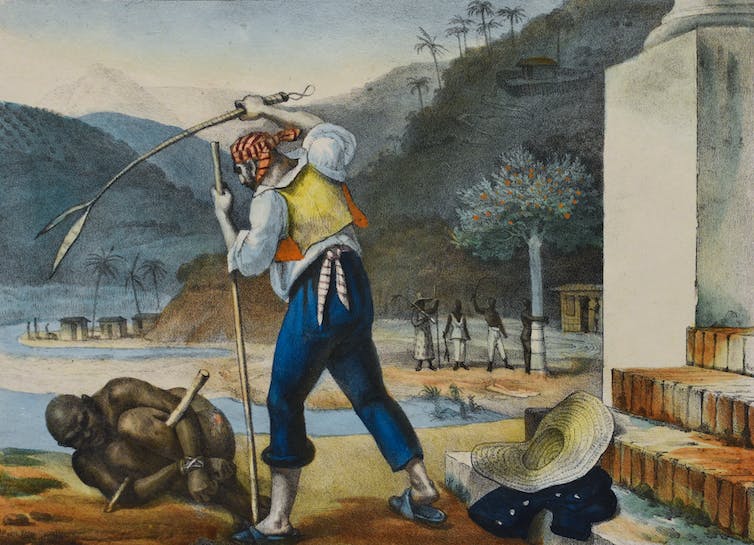 In the 1830s, African-Americans and Quakers in Philadelphia launched a “free produce” movement[23], to raise consumer awareness about the connection between slave labor and their shopping lists.

The New York abolitionist grocer David Ruggles even advertised[24] that his sweeteners were “manufactured by free people, not by slaves.”

From slave labor to prison labor

Sugar and forced labor, in particular, were seemingly inseparable.

After Reconstruction, prisoners in the South – nearly all of them black, many convicted on minor or trumped-up charges[25] – were forced to grow sugarcane and other crops. This system, called “convict leasing[26],” exploited a loophole in the 13th Amendment’s allowance of slavery “as a punishment for crime[27].” 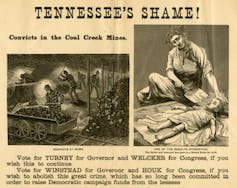 Between 1865 and 1941, more than 1 million prisoners – including children and women[30] – were sentenced to hard labor mining coal, making turpentine or constructing railroads. For big companies like U.S. Steel, the cost savings of “leased” workers gave them a competitive edge.

Even today, most U.S. states use their prison populations to furnish low-priced food and other supplies for public facilities[31], including schools. Thirty-seven states contract with companies[32] like Chevron, Compaq, Boeing and Victoria’s Secret[33].

Some of these private companies are legally obligated to pay a prevailing wage. But at Texas’ privately run[34] Lockhart Prison, workers[35] take home $1.96 an hour to make computer circuit boards[36] after 80 percent of their pay is deducted to pay for their own incarceration.

Workers in state-run facilities in eight southern states are paid nothing[37] for regular prison work like laundry.

An economy built on forced labor

Prisoner advocates acknowledge that working can break up the monotony of incarceration and teach meaningful job skills.

And prisoners need whatever money they earn[38]. Even basic services like phone calls cost much more in prison[39].

The problem, prisoners say, is that they have no control over pay or working conditions[40]. Like enslaved workers[41], they cannot simply walk off a job that’s dangerous or exploitative.

As a historian, I also hear echoes of prison workers’ protests in more recent campaigns to raise consumer awareness about sweatshop labor.

The foreign factories that manufacture clothing for many U.S. retailers[42] frequently underpay workers, require overtime and fire them for getting sick, pregnant or attempting to unionize[43].

After a Bangladesh factory collapsed in 2013[44], killing 1,138 workers, popular brands like H&M and Forever 21 agreed to enforce better working conditions at their garment suppliers, but progress has lagged[45].

From convict leasing to the billion-dollar prison industry[46], forced laborers have served American consumers for centuries. The prison strike is a very necessary reminder that they still do[47].