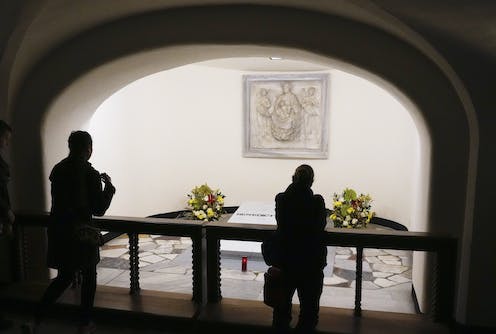 Like many others around the world, I watched the funeral of Pope Emeritus Benedict XVI live on the internet. Before the service began, an unexpected announcement came over the loudspeakers requesting that members of the assembled crowd refrain from raising any banners or flags. Nevertheless, toward the end of the liturgy, at least one large banner was displayed, reading “Santo Subito[1],” an Italian phrase that means “sainthood now.”

Identical signs were raised at the 2005 funeral of Pope John Paul II[2], who was officially canonized[3] nine years later. The connection between these events has not gone unnoticed[4], leading some to raise questions about expectations that every future pope will be acclaimed as a saint.

As a specialist in Catholic liturgy and ritual[5], I know that in the contemporary church, no one, from popes to laypeople, is ever officially proclaimed a saint immediately after death. The way that saints are chosen has changed over the centuries, and that has affected the “wait time” between death and canonization.

In the early church, Christianity was illegal in the Roman Empire. Those who were executed after refusing to renounce their faith were venerated immediately after their deaths; individuals or small groups would pray at martyrs’ graves, believed to be places of special holiness, where heaven and earth meet[6].

Those who were imprisoned for their faith but released – called confessors — were venerated by their communities in the same way.

After the legalization of Christianity in the early fourth century, other men and women who had lived lives of exceptional virtue were also recognized as holy ones and called saints. For the next several centuries, most saints were venerated at the local level.

Bishops often approved many of these saints for wider regional veneration[7]. Just before the year 1000, Ulrich of Augsburg, an ascetic German bishop, became the first saint to be officially canonized by a pope[8]. By the early 12th century, it was left to the the popes to officially proclaim most saints. In later years, popes insisted on this exclusive prerogative[9].

Although the cases – called causes – of those already locally revered for their holiness were brought to Rome for examination and approval, there was no set timeline for the process. However, no highly regarded Christian was canonized immediately after death. Instead, the investigation of their cases could take years to reach a conclusion.

The proclamation of St. Anthony of Padua in the 13th century was the fastest canonization[10] during this period. A member of the Franciscan Order of Friars Minor – meaning Little or Lesser Brothers[11] – this young priest was acclaimed for his simple, eloquent preaching.

Anthony died in 1231 and, because of his reputation, was canonized less than a year later, even faster than St. Francis of Assisi, the renowned founder of the Franciscans. Only two years after Francis’ death in 1226, Pope Urban IX proclaimed him a saint because of his “many brilliant miracles[12].”

Other causes could take longer. For example, the canonization of St. Joan of Arc took almost 500 years. During the Hundred Years’ War[13] between England and France in the 14th and 15th centuries, this French teenager experienced visions of saints directing her to liberate France. She helped win an important battle but was later captured and convicted by the English of heresy. In 1431, Joan was executed by being burned at the stake.

In 1456, Pope Callixtus III[14] declared Joan of Arc innocent of heresy, and she continued to be venerated by the French for centuries afterward. Increasing French nationalism[15] played a role in advancing her cause, and Pope Benedict XV proclaimed her a saint in 1920, praising her long-standing reputation for holiness and her life of “heroic virtues[16].”

In the 16th century, the canonization process became more standardized. The process of canonizing saints was handled in one specific office, the Sacred Congregation of Rites[17], part of the overall papal bureaucracy, the Curia. Later, in the 17th century, Pope Urban VIII set a 50-year waiting period between the death of a potential candidate and the submission of a case for canonization, to ensure that only worthy candidates would be nominated[18].

However, the process was reformed[19] during the 20th century. In 1983, Pope John Paul II set a new five-year waiting period[20] for the Vatican office, now known as the Dicastery for the Causes of the Saints[21].

This waiting period before a cause may be submitted can be, and has been, waived at the discretion of the pope. In 1999, Pope John Paul II waived it for the cause of Mother Teresa[22]. The process began then, only two years after her death in 1997, and she was proclaimed St. Teresa of Calcutta by Pope Francis in 2016[23].

After the death of John Paul II himself in 2005, his successor, Pope Benedict XVI, again waived the waiting period[24] for his case to proceed. Only nine years later, in 2014, Pope Francis proclaimed John Paul II a saint.

People watch the screening of the canonization of Pope John XXIII and Pope John Paul II broadcast from the Vatican in 2014. AP Photo/Luca Bruno[25]

However, in the intervening years, questions were raised about what some considered to be a hasty or premature advancement[26] of John Paul II’s cause.

Criticisms of the process

So far in the 21st century, several more popes have entered or completed the process. Pius XII, who died in 1958, has been named “Venerable” – the second step of the canonization process – despite ongoing controversy over his actions during World War II.

But over the past 10 years, four popes – John XXIII, Paul VI, John Paul I and John Paul II – have been proclaimed saints[28], an unusual situation in modern Catholic history.

It can seem that canonizing popes has become routine in the 21st century. Some even suggest that this trend marks a new era of personal holiness[29] in those elected to the papacy. However, not everyone cheers this trend.

Critics cite the rapid canonization of Pope John Paul II as an example of potential problems. His lengthy reign and widespread popularity led to a special pressure on Pope Francis to move quickly on his cause. Afterward, however, more evidence was uncovered raising questions[30] about the pope’s handling of the clergy abuse crisis.

Politics within the church[31] can also come into play. For example, conservatives could push strongly to canonize a more traditionally minded pope, while progressives might support a candidate with a broader point of view. This seems to be why two popes – John XXIII, who called the Second Vatican Council in 1962 to reform and renew the church, and John Paul II, who strove to curb some of the more progressive elements – were both canonized[32] at the same ceremony.

The papal power to waive even the brief five-year waiting period makes these problems even more acute. Some have even suggested imposing a moratorium on papal canonizations, or at least lengthening the waiting period[33] before a pope’s cause could be considered.

The Catholic Church teaches that saints are proclaimed so that others might be inspired by their lives and examples of “heroic virtue[34].” But it takes time to thoroughly examine each cause individually, and hidden flaws may not be uncovered until much later after the candidate’s death.

This was true for St. John Paul II, and might be the case for Pope Benedict XVI. But no one is recognized a saint simply because he served as pope[35].