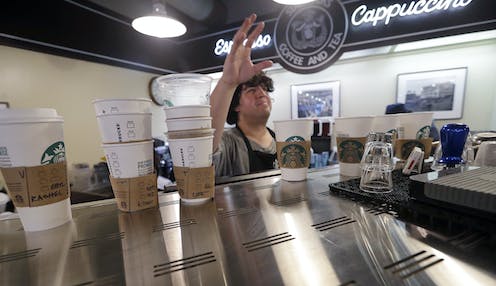 Starbucks, the coffee chain giant, is modifying its rewards program, and the news is full of stories[1] of outraged consumers[2].

The main focus of their ire is that, starting Feb. 13, 2023, it will cost twice as many[3] of the program’s reward points, called stars, to earn a free cup of hot coffee.

When companies pare rewards programs back, there is often significant customer pushback[4]. A recent example in the coffee market was seen in the fall of 2022 when Dunkin’ made it harder to get free[5] items with its rewards program[6], also leading to customer backlash.

We are[7] business school professors[8] who study frequent flyer[9] and other rewards programs. While we don’t drink very much Starbucks coffee, we are fascinated by the reaction of Starbucks customers – and what they seemed to miss.

Reward and frequent flyer programs are designed to build loyalty[10], as they provide a form of rebate to regulars. They also are seen by consumers as a good way to save money, particularly when inflation is high.

They are also meant to lock customers[11] into a particular company or airline. In the case of Starbucks, the rewards program reduces the likelihood that its customers will buy coffee from competitors like Dunkin[12], Costa Coffee, Tim Hortons or Peet’s Coffee[13].

Even though airline rewards programs have been around[14] for years, rewards programs among large restaurant chains are relatively new. Sandwich chain Subway, for example, didn’t start one until 2018[15]. Fast-food company McDonald’s only launched its loyalty program[16] in 2021.

And now, even small businesses are finding it valuable and easier[17] to start loyalty programs, thanks to the acceleration of digital technology in restaurants during the pandemic. About 57% of restaurant chains now have a loyalty program[18].

Starbucks, however, is an old-timer, having started its rewards program all the way back in 2008[19].

The program, which had been regarded by some[20] as one of the most rewarding, gained members steadily during its first two decades but exploded in growth during the pandemic[21]. At the end of 2022, about 29 million people were enrolled, up from a little over 16 million[22] in early 2019.

The rewards program’s rules are quite complex[23]: The legal language runs about five times longer than this article.

Briefly, customers earn credits by spending money. Each dollar spent on food or drinks earns one star. However, preloading money onto a Starbucks gift card or mobile app earns two times the stars.

Stars can then be spent on drinks, food or merchandise. Under the current program, the simplest and cheapest reward[24], for 25 stars, is adding a free shot, dairy substitute or flavoring to a drink. The highest cost items, for 400 stars, are merchandise[25], like a branded cup or a bag of ground coffee.

Starbucks announced changes[27] to the terms and conditions[28] of its rewards program in December, adjusting the “price” for some of its items.

The change that received the most attention was that the cost of a cup of plain hot coffee or tea would double from 50 stars to 100.

At first glance, Starbucks’ modification to its rewards program might be perceived as bad for consumers. But there is more to this change than meets the eye. What went less noticed is that the company is also lowering the price to get a free iced coffee or tea from 150 points to 100.

To an unsuspecting consumer, the points reduction for iced coffee may not mean as much against the points increase for hot coffee. The coffee business, however, has radically changed over the last few years. The change is best summarized by a recent New York Times headline, “Does anyone drink hot coffee anymore?[29]” Iced or cold-brewed coffee is now the rage[30] – even in winter – and growing quickly[31]. Cold beverages have accounted for at least 60%[32] of Starbucks’ total sales every quarter since early 2021, thanks in part to the popularity of iced drinks among Gen Z customers.

This means that for a large share of Starbucks customers, one part of the rewards program is actually getting more generous.

So why the uproar, if one of the more popular items on Starbucks’ menu is getting cheaper?

Loss aversion[33], a key concept in behavioral economics, provides a simple explanation. Loss aversion means people perceive something they lose as a bigger deal than something equivalent they gain. People who need to spend 50 more stars from now on to get a hot coffee feel more pain than customers who will spend 50 fewer stars to earn a free iced coffee. This extra pain leads to more complaints from those hurt and little praise from those benefiting.

Starbucks, for its part, explained the new rewards system this way[34]:

“This change allows us to improve the health of our program while making member favorites like iced coffee easier to earn.”

While its critics may disagree about the reason for the decision, ongoing research by one of us[35] conducted into a tea chain suggests retailers have a profit incentive to make their rewards programs more generous. The reason is simple: When rewards are easier to earn, customers become more motivated to collect points, especially as they approach a reward[36] they can redeem. This is why airlines see some customers doing mileage runs at the end of the year[37], just to earn better status.

From the company’s perspective, the benefits from customers shopping more frequently can surpass the costs incurred by providing more rewards. And so for companies and consumers, rewards programs can benefit everyone.