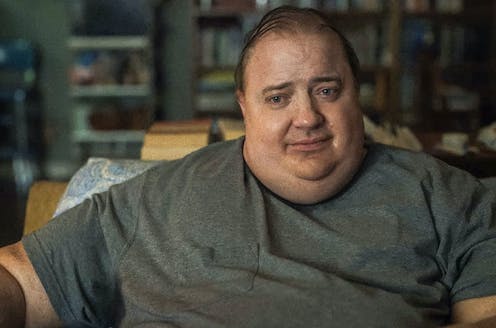 Editor’s note: This article contains plot spoilers for “The Whale.”

I knew before seeing “The Whale[1]” that it was a movie about a man named Charlie who weighs over 600 pounds, is grief-stricken over the death of his partner, and is effectively trapped in his apartment due to his weight.

I also knew that “The Whale” had attracted a great deal of criticism, provoking anger[2], disgust[3] and accusations of exploitation[4]. Despite the controversy, Brendan Fraser’s performance has been widely praised[5], and he’s been nominated for best actor[6] at the 95th Academy Awards.

But what I didn’t know was that this film would make me cry. As I left the theater, I found myself hyperaware of my own fat body moving through the parking lot, and I started to feel the way I often do when I see a reflection of myself in a mirror: monstrous.

In my research[7] on fat characters in popular culture, I point out how the fat character usually must lose weight in order to gain acceptance or to be loved.

In “The Whale,” however, Charlie does not lose weight; the transformation goes in the opposite direction: he gets bigger and bigger, suffering a slow and painful physical breakdown. As I watched the film, I started to understand, with a looming sense of dread, that “The Whale” had no plans to recuperate this character. The fatness was the subject and the point.

I began to realize that this movie was not a melodrama, nor an uplifting tale about redemption; to me, “The Whale” is a body horror film that exploits the fear and disgust people feel toward fatness.

The body as a monster

Body horror[8] is a subset of the horror film genre that depicts the destruction, degeneration or mutation of the human body. These films are designed to gross out viewers, and the protagonist often becomes the monster of the story as their body becomes more and more repulsive.

“The Fly,” a remake of the 1958 film[14] of the same name, tells the story of a scientist named Seth Brundle who merges his DNA with that of a common housefly. Over the course of the film, he gradually degenerates into a disgusting creature nicknamed “Brundlefly[15].” Another particularly disturbing body horror film is “Tusk[16],” in which a man obsessed with walruses ends up kidnapping a cruel podcaster and dismembers him in order to turn him into a walrus.

David Cronenberg’s ‘The Fly’ is a standout of the body horror genre. 20th Century Studios[17]

In body horror films, there is something viscerally disturbing about seeing the human body distorted, whether it’s due to a parasitic alien[18], a mutated virus[19] or the sadistic compulsions of a mad scientist[20].

“The Whale” suggests that although Charlie deserves pity, he is nonetheless a monstrosity[21].

Like Seth Brundle, who experiments on himself while drunk, Charlie regularly gorges on fried chicken, pizza and subs – the implication being that Charlie is directly responsible for his morbid obesity.

Seeing Charlie’s gradual physical disintegration is like watching a slow-motion car wreck; you cannot look away even though you know you should. He’s barely able to stand, and he loses the ability to perform the most basic of tasks, like picking up an object from the floor. In some scenes, the camera rests on Charlie’s distended gut, his swollen calves or his sweat-soaked clothes, inviting the audience to be repulsed.

In body horror, there is no return from being transformed; the damage is done. And although not every transformed body horror character dies, many do.

In the end, Charlie’s body ends up destroying him.

Till flesh do us part

Film critic Robin Wood famously argued[22] that “the true subject of the horror genre is the struggle for recognition of all that our civilization represses and oppresses.”

In a thin-obsessed culture[23], fatness has become its own kind of monster. Despite the body positivity[24] movement, fat people are still often viewed as unattractive and abnormal[25], and are more likely to be discriminated against[26] at work, stigmatized by physicians and convicted by juries.

In 2012, sociologist Francis Ray White wrote that[27] “fatness is increasingly being figured as anti-social” – something that “must be eliminated in the name of a viable future.” White points out that when obesity is talked about as an “epidemic,” it reinforces the idea that fatness is an illness that must be cured, and that fat people are not people but carriers of a contagion.

In the final moments of “The Whale,” viewers witness Charlie’s life ending: He vividly remembers a time when he was blissfully happy, on a beach with his daughter and the love of his life. As he is dying, he levitates, at last free from the monstrous burden of flesh.

It is the only time in the film where he seems weightless; indeed, it is the only moment of freedom for this character.

But the monster itself – fatness – lives on.

Darren Aronofsky, the film’s director, has said that his film is “an exercise in empathy[28].”

But if empathy is the ability to understand and share the feelings of another, why was I left with the idea of my own body as an irredeemable monstrosity? I’m not alone in this unease; critic Roxane Gay[29] called The Whale a “carnival sideshow,” and “emotionally devastating.” To Gay, “The Whale” depicts fatness as “something despicable, to be avoided at all costs.”