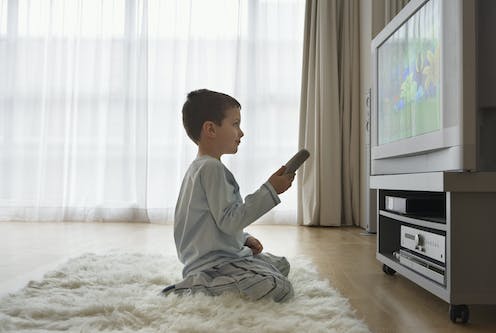 Curious Kids[1] is a series for children of all ages. If you have a question you’d like an expert to answer, send it to curiouskidsus@theconversation.com[2]. How does a TV work? – Caden, age 11 Look at your modern-day TV, and you see nothing less than a technological miracle. Scientists began experimenting with the concept of television more than a century ago[3]. But decades would pass before the Radio Corporation of America brought it to the public[4] at the 1939 World’s Fair. More time passed before TV sets were in stores – and even then, it took awhile until most people had one[5]. In 1950, fewer than 10% of Americans owned a television. By 1959, that number had grown to 85%.

In the 1950s, television sets were bulky and the picture was in black and white. H. Armstrong Roberts/Retrofile RF via Getty Images[6]

During the ‘50s, TVs were expensive, screens were small and the picture wasn’t always crystal clear.

What’s more, early TV programs were in black and white[7]; color wasn’t in wide use until the mid-1960s.

Viewers didn’t have a lot of choice, either. Instead of hundreds of channels to choose from, most cities offered only three or four.

And DVR didn’t exist. Programs appeared on a specific day at a particular time, and if you missed it – you missed it.

As a professor[8] of electrical and computer engineering, I am amazed by the remarkable advances of this technology in only a few decades.

Yet whether an early television with a 5-inch screen, or one of today’s smart TVs that practically cover the wall[9], your set still has three primary functions: to receive audio and video data; to use that data to present the viewer with sound and a picture; and to provide the viewer with a way to set the channel and the volume.

A rooftop antenna receives the TV signal sent by the local television station. Tim Allen/iStock via Getty Images Plus[10]

Early TVs worked with the use of “analog signals”[11] – essentially radio waves containing both the picture and sound of a television program.

Simply put, here’s how it worked: Using a giant transmission tower, the local television station repeatedly sent those radio waves through the air during the broadcast day. Antennas on the roofs of buildings and homes in the community intercepted those waves[12] and, through a cable, transported the signal to the television sets inside.

There, the TV unscrambled the signal and turned it into a picture with sound. What you saw and heard wasn’t as sharp as today’s TVs, but it was good.

By 2009, TV stations replaced analog signals with digital TV signals, which is the standard used today[13]. HDTV, or high-definition television, has an amazing picture quality compared to earlier TVs. Digital signals are still transmitted using radio waves, but the TV picture is encoded in binary[14] – that is, a series of 0s and 1s.

An illustration of binary code, which is the way digital signals are transmitted to your television. fotograzia/Moment via Getty Images[15]

Pictures are created by basic units called pixels[16]. Your TV screen has tens of thousands of pixels, and each one has a “color index” and an “intensity.” Basically, three colors – red, blue and green – form other colors in various combinations, and the picture is ultimately created from all the pixels together forming an image. Just like mixing paint to make any color you wish, varying the amount and intensity of each of the color pixels creates the desired image.

Groups of bits are formed into larger units called bytes[17]. They are the communication link between the content you are watching and your TV. A modem[18] packages and unpackages this information; at its heart, every TV or cellphone is based on a modem.

The packaged information can be transmitted over the air or sent via fiber or cable, where they come into your TV via a cable box. Streaming TV, a service that has become very popular, takes data from a computer network[19].

Then it’s up to you, the viewer. Your modern digital smart TV has an interface that allows you to control all the functions. Basically, a smart TV is a computer, large monitor and receiver all in one package.

In the future, there will be more merging of the functions of your cellphone and TV. The TV will be a screen for your cellphone, for example. Also expect more virtual reality, augmented reality[20] and ultra-high definition TV[21].

“Watch Mr. Wizard,” one of early television’s most popular programs for kids. This episode aired in 1962.

Hello, curious kids! Do you have a question you’d like an expert to answer? Ask an adult to send your question to CuriousKidsUS@theconversation.com[22]. Please tell us your name, age and the city where you live.

And since curiosity has no age limit – adults, let us know what you’re wondering, too. We won’t be able to answer every question, but we will do our best.