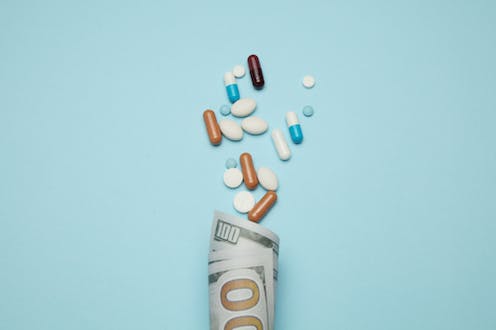 Biomedical innovation reached a new era during the COVID-19 pandemic as drug development went into overdrive. But the ways that brand companies license their patented drugs grant them market monopoly, preventing other entities from making generics so they can exclusively profit. This significantly limits the reach of lifesaving drugs, especially to low- and middle-income countries, or LMICs.

I am an economist[1] who studies innovation and digitization[2] in health care markets. Growing up in a developing region in China with limited access to medications inspired my interest in institutional innovations that can facilitate drug access. One such innovation is a patent pool, or a “one-stop shop” where entities can pay one low price for permission to make and distribute all the treatments covered by the pool. My recent research found that a patent pool geared toward public health[3] can spur not only generic drug access in LMICs but also innovation for pharmaceutical companies.

Drug patents in the global landscape

Patents are designed to provide incentives for innovation by granting monopoly power to patent holders for a period of time, typically 20 years[4] from the application filing date.

However, this intention is complicated by strategic patenting. For example, companies can delay the creation of generic versions of a drug by obtaining additional patents based on slight changes to its formulation or method of use, among other tactics. This “evergreens[5]” the company’s patent portfolio without requiring substantial new investments in research and development.

Furthermore, because patents are jurisdiction-specific[6], patent rights granted in the U.S. do not automatically apply to other countries. Firms often obtain multiple patents covering the same drug in different countries, adapting claims based on what is patentable in each jurisdiction.

To incentivize technology transfer to low- and middle-income countries, member nations of the World Trade Organization signed the 1995 Agreement on Trade-Related Aspects of Intellectual Property Rights[7], or TRIPS, which set the minimum standards for intellectual property regulation. Under TRIPS, governments and generic drug manufacturers in low- and middle-income countries may infringe on or invalidate patents to bring down patented drug prices under certain conditions. Patents in LMICs were also strengthened to incentivize firms from high-income countries to invest and trade with LMICs.

Determining what is patentable can be complicated.

The 2001 Doha Declaration[8] clarified the scope of TRIPS, emphasizing that patent regulations should not prevent drug access during public health crises. It also allowed compulsory licensing, or the production of patented products or processes without the consent of the patent owner.

One notable example of national patent law in practice after TRIPS is Novartis’ anticancer drug imatinib (Glivec or Gleevec). In 2013, India’s Supreme Court denied Novartis’s patent application[9] for Glivec for obviousness[10], meaning both experts or the general public could arrive at the invention themselves without requiring much skill or thought. The issue centered on whether new forms of known substances, in this case a crystalline form of imatinib, were too obvious to be patentable. At the time, Glivec had already been patented in 40 other countries[11]. As a result of India’s landmark ruling, the price of Glivec dropped from 150,000 INR (about US$2,200) to 6,000 INR ($88)[12] for one month of treatment.

Although TRIPS seeks to balance incentives for innovation with access to patented technologies, issues with patents still remain. Drug cocktails, for example, can contain multiple patented compounds[13], each of which can be owned by different companies. Overlapping patent rights can create a “patent thicket[14]” that blocks commercialization. Treatments for chronic conditions that require a stable and inexpensive supply of generics also pose a challenge, as the cost burden of long-term use of patented drugs is often unaffordable for patients in low- and middle-income countries.

One solution to these drug access issues is patent pools[15]. In contrast to the currently decentralized licensing market, where each technology owner negotiates separately with each potential licensee, a patent pool provides a “one-stop shop” where licensees can get the rights for multiple patents at the same time. This can reduce transaction costs, royalty stacking and hold-up problems in drug commercialization.

Patent pools were first used in 1856 for sewing machines[18] and were once ubiquitous across multiple industries[19]. Patent pools gradually disappeared after a 1945 U.S. Supreme Court decision[20] that increased regulatory scrutiny, hindering the formation of new pools. Patent pools were later revived in the 1990s[21] in response to licensing challenges in the information and communication technology sector.

Despite many challenges, the first patent pool created for the purpose of promoting public health formed in 2010 with support from the United Nations and Unitaid. The Medicines Patent Pool, or MPP[22], aims to spur generic licensing for patented drugs that treat diseases disproportionately affecting low- and middle-income countries. Initially covering only HIV drugs, the MPP later expanded to include hepatitis C and tuberculosis drugs, many medications on the World Health Organization’s essential medicines list and, most recently, COVID-19 treatments and technologies.

But how much has the MPP improved drug access?

I sought to answer[23] this question[24] by examining how the Medicines Patent Pool has affected generic drug distribution in low- and middle-income countries and biomedical research and development in the U.S. To analyze the MPP’s influence on expanding access to generic drugs, I collected data on drug licensing contracts, procurement, public and private patents and other economic variables from over 100 low- and middle-income countries. To analyze the MPP’s influence on pharmaceutical innovation, I examined data on new clinical trials and new drug approvals over this period. This data spanned from 2000 to 2017.

I found that the MPP led to a 7% increase in the share of generic drugs supplied to LMICs. Increases were greater in countries where drugs are patented and in countries outside of sub-Saharan Africa, where baseline generic shares are lower and can benefit more from market-based licensing.

I also found that the MPP generated positive spillover effects for innovation. Firms outside the pool increased the number of trials they conducted on drug cocktails that included MPP compounds, while branded drug firms participating in the pool shifted their focus to developing new compounds. This suggests that the MPP allowed firms outside the pool to explore new and better ways to use MPP drugs, such as in new study populations or different treatment combinations, while brand name firms participating in the pool could spend more resources to develop new drugs.

The MPP was also able to lessen the burden of post-market surveillance for branded firms, allowing them to push new drugs through clinical trials while generic and other independent firms could monitor the safety and efficacy of approved drugs more cheaply.

Overall, my analysis shows the MPP effectively expanded generic access to HIV drugs in developing countries without diminishing innovation incentives. In fact, it even spurred companies to make better use of existing drugs.

Technology licensing for COVID-19 and beyond

Since May 2020, the Medicines Patent Pool has become a key partner of the World Health Organization COVID-19 Technology Access Pool[27], which works to spur equitable and affordable access to COVID-19 health products globally. The MPP has not only made licensing for COVID-19 health products more accessible to low- and middle-income countries, but also helped establish an mRNA vaccine technology transfer hub[28] in South Africa to provide the technological training needed to develop and sell products treating COVID-19 and beyond.

Licensing COVID-19-related technologies can be complicated by the large amount of trade secrets[29] involved in producing drugs derived from biological sources. These often require additional technology transfer beyond patents, such as manufacturing details[30]. The MPP has also worked to communicate with brand firms, generic manufacturers and public health agencies in low- and middle-income countries to close the licensing knowledge gap[31].

Questions remain on how to best use licensing institutions like the MPP to increase generic drug access without hampering the incentive to innovate. But the MPP is proving that it is possible to align the interests of Big Pharma and generic manufacturers to save more lives in developing countries. In October 2022, the MPP signed a licensing agreement with Novartis for the leukemia drug nilotinib[32] – the first time a cancer drug has come under a public health-oriented licensing agreement.