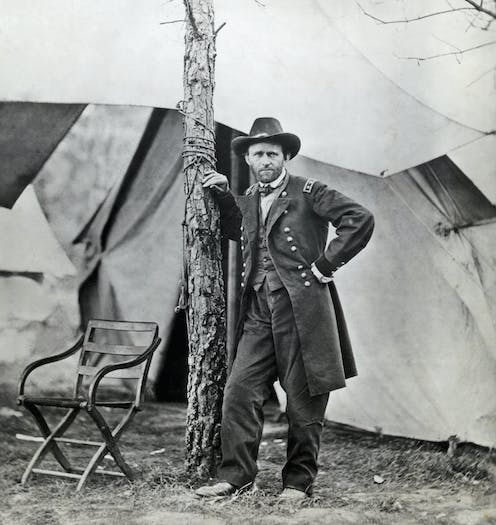 Tucked away in an amendment to the FY2023 U.S. defense authorization bill[1] is a rare instance of congressional bipartisanship and a tribute to U.S. President Ulysses S. Grant.

If approved, the measure would posthumously promote Grant to the rank of General of the Armies of the U.S., making him only the third person – along with John J. Pershing[2] and George Washington[3] – to be awarded the nation’s highest military honor.

As Executive Director[4] of the Ulysses S. Grant Presidential Library[5], I believe that the promotion would be much more than a symbolic nod to a great military general. Rather, it would highlight the overlooked legacy of a man who fought to end the last vestiges of slavery.

During the Civil War, Grant rose to fame as a decisive leader who was willing to doggedly pursue Confederate armies and avoid retreat at all costs. He first gained his reputation for tenacity with Union victories at Shiloh[6], the Battles for Chattanooga[7] and the Siege of Vicksburg[8].

Like most white Northerners, Grant signed up to fight for the Union[9] – not for emancipation.

But by 1862, the freedom of enslaved African Americans[10] had become vital to the Union war strategy, if not yet its cause.

A year before President Abraham Lincoln signed in 1863 the Emancipation Proclamation[11] that freed enslaved people in the Confederate states, Grant oversaw the establishment of refugee, or contraband camps[12], throughout the Mississippi Valley[13]. Those camps provided basic housing, food and work for Black men and women who had fled from slavery.

In March 1864, Lincoln appointed Grant[16] to the rank of lieutenant general and ordered him to take on the Confederate Army in Virginia, a task at which numerous other Union leaders had failed.

At this point during the war, Grant assumed the role of chief strategist for the entire Union war effort. It took the next 13 months of fighting during the Overland campaign[17] before Confederate General Robert E. Lee surrendered[18] to Grant at Appomattox[19] on April 9, 1865.

After the Federal victory, many Americans hailed Grant[21] as the man who saved the Union.

But Grant was magnanimous in victory.

Multiple times during the war he honored the dignity[22] of his defeated adversaries, most famously at Appomattox, where he did not require Lee to hand over his sword, as usually required. Grant also allowed Confederate officers to keep their sidearms and horses.

Lee appreciated Grant’s actions[23], remarking: “This will have the best possible effect upon the men … it will be very gratifying, and will do much toward conciliating our people.”

Impact of the ‘Lost Cause’

But after the war, the conciliatory feelings vanished.

Southern partisans constructed[24] the narrative of the “Lost Cause.” It held that the root of the Civil War was not slavery, but the rights of states to control[25] their own destinies. It further held that the Union victory had nothing to do with Confederate character or leadership, but rather the Union’s sheer numbers and superior resources.

In this Lost Cause narrative[26], Grant was seen as a bumbling butcher devoid of any meaningful strategic vision, who succeeded only by mercilessly throwing more soldiers at his enemy. It also revived the old rumors[27] of his excessive drinking.

In this storyline, Grant’s foil was always the courtly gentleman, Robert E. Lee. The hagiography of Lee demanded Grant’s inferiority[28].

By the early 20th century, the Lost Cause was no longer isolated in the South and had spread across America. Crowds flocked to see the racist anti-Reconstruction “Birth of a Nation”[29] in movie theaters, and during the World War I rush to build military bases, the Army named 10 of them after Confederate generals[30].

Grant served as president from 1869 to 1877[31] during a time when white Southerners proved hostile toward federal Reconstruction measures[32] that sought equal rights for recently freed enslaved people.

Grant saw his role of enforcing these policies as an extension of his wartime duty and necessary to protect the gains of the Union victory[33], especially the newly established rights for African Americans.

He used the resources of the federal government to crush the Ku Klux Klan[34], established the Department of Justice to investigate civil rights abuses[35] and signed the Civil Rights Act of 1875[36].

In recent years, the American public has questioned the Lost Cause and taken steps to mitigate its pervasiveness throughout the U.S.

Southerners themselves have chosen to remove Confederate leaders[37] from town squares and state flags[38]. The U.S. Army has established a Naming Commission[39] to rebrand Confederate-named bases[40].

A statue of Confederate general Robert E. Lee is lifted off its pedestal in Charlottesville, Virginia. Getty Images[41]

It is telling, too, that Grant’s Presidential Library is now located in Mississippi, a Deep South state he once conquered.

It remains to be seen whether the request made to elevate Grant’s rank by U.S. Senators Sherrod Brown[42] of Ohio, a Democrat, and Roy Blunt[43] of Missouri, a Republican – along with GOP U.S Rep. Ann Wagner[44] – will be finally approved by Congress as part of the FY2023 National Defense Authorization Act[45].

Either way, in my view, a thoughtful reconsideration of Grant’s wartime and post-war contributions is long overdue.