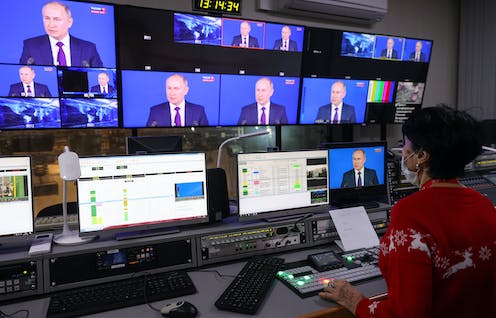 As Western news outlets warn of a “countdown to war[1],” Kremlin-controlled Russian television has a different take, accusing the U.S. of “hysteria”[2] in its insistence that President Vladimir Putin is about to invade Ukraine.

The only attack the West needs to worry about is its own “panic attack[3],” proclaimed a banner on Channel One’s evening news program “Vremia” on Jan. 24, 2021. “Even the Ukrainians cannot believe how far the U.S. has gone,” said rival news show “Vesti”[4] on station Russia-1, referring to the evacuation of U.S. Embassy personnel from Kyiv[5].

A historian of Russia interested in propaganda and media strategy[6], I was in Moscow both when NATO bombed Russian ally Yugoslavia in 1999[7] and again when Russia deployed troops to the Crimea in 2014[8], purportedly to protect Russian citizens under threat from political upheaval in Ukraine. Both times, many people across Russia agreed with government claims[9] that the U.S. had sparked the conflict by meddling behind the scenes. Both events evoked waves of patriotic fervor and scores of headlines promising a Russian fight against Western interference.

Now, as Russian troops are massed along the Ukrainian border, the government’s tone is quieter, but arguably more insidious. Weeks of jingoistic talk shows on which guests proclaimed the need for Russia to flex its muscle before the world, all clustered around the 30th anniversary of the dissolution of the Soviet Union on Dec. 26, 1991[10], have been replaced with relative calm.

The only country wanting to fight, according to Russian broadcasters, is the U.S. – and America’s real battle is an internal one.

A Russian army soldier takes part in drills at the Kadamovskiy firing range in the Rostov region in southern Russia on Dec. 10, 2021. AP Photo[11]

The US in decline

Arguably the most famous anthem of the dying Soviet Union was the 1990 song “Train On Fire” by the dissident rock band “Akvarium[12],” in which a Soviet colonel calls his troops home, saying that after many years of war, it turns out “we have only been fighting against ourselves.” Today, Kremlin-controlled media is directing a similar message toward the United States.

A picture of an American flag on which the Russian phrase ‘panic attack’ has been superimposed, shown during the cold open of news program ‘Vremia’ on Jan. 24, 2022. Author provided screenshot., CC BY-SA[15][16]

In one case, a correspondent bolstered this claim by showing U.S. citizens on the streets of Washington, an unlabeled map of European countries and recording their confusion when they were asked to identify the location of Ukraine[17].

In contrast, these reports present Russia and its leader, Vladimir Putin, as calm, rational and effective. Some play up the alleged superiority of Sputnik’s COVID vaccine over Pfizer’s, or the orderly departure of so-called Russian “peacekeeping” forces from Kazakhstan. These soldiers were deployed to subdue citizen protests[18], but newscasters in Russia praise their actions and favorably compare their purported “success” to the “failed mission” and chaotic pullout of U.S. troops from Afghanistan.

Ukraine is being used

Both Russian government officials and Russian journalists acknowledge there have been troop buildups near the Russian-Ukrainian border. But they accuse the West of engaging in overheated rhetoric and, at times, “inhuman lies and blatant provocation[19].”

Russian Foreign Minister Sergei Lavrov called the troop buildup part of “military exercises” no different from those the U.S. routinely conducts in Eastern European countries – just more legitimate, as they are being conducted within Russia’s own borders. He derided Washington for concerning itself with internal Russian maneuvers, while at the same time, telling Russia that U.S. troop actions in Europe are “none of their concern[20].”

On the Jan. 24 daily news program “Vesti,” the Ukraine situation did not even lead the show. A weather story[21] did, featuring photos of record snowfall in another region of Russia bordering the Black Sea. Tensions with NATO allies was the fifth story of the evening.

In any coverage of Ukraine, a recurring theme is the weakness of the country and, particularly, of its president, Volodymyr Zelenskyy. On Jan. 23, Channel One evening news showed old footage of Zelenskyy[22] from his time as a practicing comedian, in a skit where he and several other men pretended to play a piano with their own genitalia.

Screenshot from a story in the ‘Sunday Time’ week-in-review news show, featuring file footage of Ukrainian President Volodymyr Zelenskyy (third from left) in a comedy skit, playing the piano with no hands. Author provided, CC BY-SA[23][24]

The next evening, criticism of Zelenskyy was more direct, mentioning a “catastrophic decline[25]” in his popularity rating. “Experts have long said that Zelenskyy as an independent leader does not exist, that the Anglo-Saxons use him for their own purposes,” one script read. “Zelenskyy is tired[26]” ran the lead story on Ukraina.ru, a news agency directed at Russians in Ukraine.

The West is attempting to “seduce Zelenskyy” into provoking a military confrontation, declared a “Vremia” journalist on Jan. 24. He is “torn between his desire to save his ratings[27] with a small victorious war and his fear of losing that same war.”

State-controlled media is not, however, the only voice being listened to by Russians.

Many Russians seem to shrug at such stories, though even Putin critics acknowledge that many also share in the president’s condemnation[32] of NATO expansion in the post-Soviet years. Independent media outlets such as Meduza condemn “Kremlin brinksmanship[33]” for fueling confrontation.

The question then becomes, do most Russians really believe in their homegrown propaganda?

This is hard to tell, particularly amid an ongoing crackdown to silence independent voices and organizations[34]. Journalists have fled, opposition members have been jailed and human rights organizations[35] have been shut down. What then becomes most difficult to assess is the sentiment of any possible “silent majority” – citizens disillusioned with politics and feeling surrounded by larger forces outside of their control.

Another question is, do they care? Similar to others around the world, many news consumers in Russia are more concerned about domestic struggles.

A Russian friend who just returned from six weeks in St. Petersburg said that nobody she knew favored a war with Ukraine, but that the issue wasn’t even on most people’s radar.

“Citizens are much more concerned about the ruble exchange rate and the economic situation,” she said. “Also, they are much more worried about police-supervised COVID vaccinations and other domestic problems. People are sick and tired of those endless political TV shows about the Ukraine; they are absolutely indifferent to international issues, and that causes big problems for Putin,” who, she claims, “doesn’t want to deal with the situation inside the country at all.”

[Get the best of The Conversation, every weekend. Sign up for our weekly newsletter[36].]