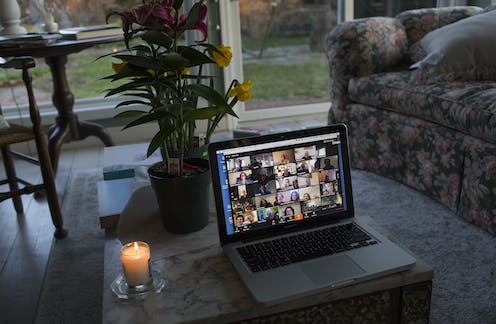 The unexpected death of a friend and colleague to COVID-19 in January 2021 led me to start researching how American death rituals were transforming during the pandemic. My friend was Hindu, and while watching his funeral on Zoom, I witnessed the significant transformations that had to be made to the traditional rituals to accommodate COVID-19 safety guidelines.

In the spring and summer of 2021, I conducted over 70 hours of oral history interviews with people involved in the medical and funerary professions, as well as grieving families and those who worked closely with them, including grief counselors, hospice workers and even spirit mediums.

As a historian of religion[1] interested in how different cultures make sense of death, I noticed what appeared to be a momentous cultural shift happening in America in terms of death rituals as over 850,000 Americans died from COVID-19[2]. During this period, funerary customs dramatically shifted and, in many cases, failed to bring any comfort to grieving friends and families.

What changed in funerary rituals

In my conversations, funerary professionals described the initial chaos as funeral size had to be dramatically curtailed, sometimes with only one to two hours’ notice. Eventually, many began to innovate with new technologies that allowed them to hold virtual funerals.

Richard Davis of the Cook-Walden Funeral Home in Pflugerville, Texas, described how early in the pandemic he utilized radio technology for grieving families who could be in their cars in the parking lot, tune the radio to a specific station and listen to the person giving the eulogy inside the funeral home.

Some funerary directors partnered with wedding videographers whose business was suddenly upended because most weddings were canceled or delayed. These videographers found that the high-quality equipment used to produce wedding videos could as easily be put to use broadcasting a Zoom funeral.

I also spoke with three spirit mediums who all described a marked increase in clients seeking postlife words from loved ones who died on ventilators. They described how anguished families sought to know that their loved one had not died alone and did not blame them for their death. One medium in particular also noted that the pandemic saw an increase in family members seeking to connect with those who had died of drug overdoses[3] brought on by the stress of the pandemic.

The end-of-life work of religious leaders was transformed as well: Catholic and Episcopal last rites were performed via FaceTime, sometimes with consecrated oil being carefully administered by a Q-tip[4].

The Jewish tradition of sitting with a body before burial – usually performed by volunteers in shifts at the funeral home – became an at-home experience. Although the volunteers, called shomer or shomeret in Hebrew[5], could not sit next to the body as usual, they worked on the honor system to ensure that someone was always praying and keeping the deceased in their thoughts, even while far away.

Muslim leaders described working with local health agencies to obtain Personal Protective Equipment (PPE) and specialized training for those performing the full-body washing of a corpse known as ghusl in Arabic[6].

These adaptations reflect a long history of transformations for the American funeral.

In the 17th and 18th centuries, most Americans generally prepared the body themselves and hosted the funeral at home. However, by the 19th century[7], more Americans were dying in hospitals as a result of the availability of medical care and because the corpse was believed to be carrying disease[8]. This spurred the development of the funeral home. Individual funeral homes often personalize their offerings to the needs of local cultural or religious communities.

Funeral homes became most popular after embalming – a form of preservation performed by mortuary specialists – became the norm after the Civil War. The war spurred a crisis to preserve soldiers’ bodies while they made the long trip home[9], and embalmers would sometimes follow the military troops to accept payment in advance for the procedure.

Today, the funeral industry has grown to a whopping US$20 billion[10], and embalming remains the predominant treatment for the body after death.

With the rise of the internet, funerals are once more undergoing rapid transformations. Scholar of death and dying Candi Cann[11] has shown how the internet gives rise to new forms of social remembrance after death[12]. These can include mourners going to Facebook or Instagram pages on the anniversary of the death and leaving a message about how much they miss the deceased. Online marketplaces allow for the purchase of individualized mourning paraphernalia[13] like T-shirts or bumper stickers, and public memorials at the site of death[14].

People tried to memorialize their loved one in different ways. Images of COVID-19 victims from Detroit are displayed in a drive-by memorial at Belle Isle State Park. Aaron J. Thornton/Getty Images[15]

Such tools thrived during the pandemic. During my research, several individuals who lost loved ones explained creating memorial items, including stickers and face masks commemorating a lost loved one, as a way to encourage others to wear masks. Virtual online communities of COVID-19 mourners adopted the yellow heart[16] as a public expression of loss of a loved one to the pandemic in the U.S. and Europe.

Funerals and other rituals surrounding death are important to begin the grieving process. Research has found that performing rituals has a major role in alleviating grief[17] through increasing feelings of control and transitioning mourners to accepting their loss. Funerals can provide important structures for families to say goodbye[18] that have been correlated with better grief outcomes.

J.Z. Smith[19], one of the most influential theorists of religion in recent years, said that “ritual relies for its power on the fact that it is concerned with quite ordinary activities placed within an extraordinary setting[20].” In other words, ritual takes elements from the ordinary world – words, gestures, symbols, etc. – and imbues them with extraordinary meaning.

We might cry or wear black clothing every day for any number of reasons, but in funeral rituals these activities have special significance and bring a sense of closure. It is this repurposing of ordinary things that makes rituals so effective.

Psychological studies too have shown that the greater the difference between what happens in the ritual and “normal” life, the more effective it is for individuals[21].

But in my conversations with those who lost loved ones to COVID-19, it became apparent that for many, the transformations in funerals and rituals of mourning failed to help them in dealing with their grief. As one individual explained to me, “I knew my grandmother would pass away sometime, but I always imagined I would be there; I never imagined I would be watching it virtually on Facebook. It felt like a parody of a funeral.”

Another interviewee explained how the isolation necessary in the pandemic era fundamentally undermined the comfort these rituals could provide: “Because my family has been so terrified of COVID, we have not been able to gather together to process my mother’s death. That has been really hard for me culturally – especially in Indigenous families, you grieve together.”

Reverend Richard R. Andre, C.S.P. of St. Austin Catholic Parish in Austin, Texas, echoed these thoughts as he described assisting those losing loved ones in his own spiritual community: “The funeral helps you to start a process of closure. But without the funerals they envisioned, people are just getting stuck and are unable to grieve.”

The COVID-19 pandemic has forced us to consider how rituals can lose their extraordinary power when our sense of “normal” is shattered and remains shattered for years. As religion theorist J.Z. Smith noted, rituals work by framing the ordinary as extraordinary[22]. But if nothing feels normal, then nothing can feel extraordinary either.

[The most interesting religion stories from three major news organizations. Get This Week in Religion.[23]]