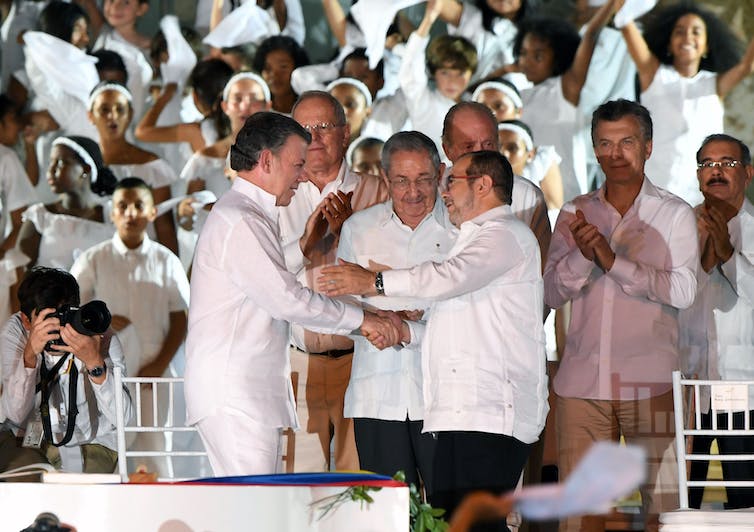 The Biden administration has signaled how it will use its power to designate different groups as terrorists as part of its foreign policy efforts.

Secretary of State Antony Blinken took the Colombian rebel group[1] the Revolutionary Armed Forces of Colombia, known as the FARC, off the U.S. Foreign Terrorist Organizations list[2] at the end of 2021.

I know the importance of this decision because I worked on adding and deleting groups[3] and individuals on multiple lists[4], including the Foreign Terrorist Organizations.

What’s the use of terrorist lists?

Groups and individuals are added to the State Department’s Foreign Terrorist Organizations and Executive Order 13224 lists regularly, but decisions to remove groups from these lists are less common.

Simply put, most terrorist groups don’t want to put down their weapons, which is the only way they’ll ever get off the U.S. lists.

Why removing the FARC makes sense

The FARC was an enduring and central part of the Colombian conflict, which lasted for more than 50 years. The FARC officially ended its reign over approximately 25%[9] of Colombian territory in 2016[10], when it reached a peace settlement with the Colombian government.

The peace agreement’s implementation[11] over the last five years has been rocky.

Thousands of FARC members[12] were unwilling to embrace the peace agreement and fought over territory and drug markets with rival groups.

Mass killings[13] continued after the agreement. And close to 5 million people[14] remain internally displaced because of the conflict.

The Colombian government continues to implement[16] the peace agreement, which calls for investing more in rural communities — where the FARC once dominated — and people’s basic services, like clean water.

Yet, the decision to remove the FARC from the State Department’s FTO list made sense to me and other experts[17] because the FARC has lived up to key elements of the peace deal. The FARC has largely turned in its arms[18] and made a good-faith effort[19] to become part of the Colombian political system.

The FARC’s political party, Comunes[20], has had “dismal”[21] election results in recent years, according to the think-tank organization International Crisis Group.

While the FARC has largely adhered to the Colombian peace agreement, other splinter terrorist groups, like the FARC-EP, remain active in the country. Joaquin Sarmiento/AFP via Getty Images[22]

Removing terrorist groups from these U.S. government blacklists is difficult.

Governments in countries where terrorist groups historically operate are often reluctant to support the U.S. decision to alter the list, since this can distress the civilians and government officials these groups harmed.

It is also difficult because the named terrorist groups often have a very bloody history. That holds true for the FARC, which may be responsible[26] for more than 100,000 deaths.

There are a few pathways to removing a group from the FTO list. In one scenario, a terrorist group has been defeated.

There can be little doubt, based on my experience, that factions of Colombia’s government were upset by the U.S. decision to strike the FARC from the FTO list.

One of the most important policy maneuvers that can make such a political move less controversial is adding new groups and individuals from the same conflict to the blacklists.

Including two new Colombian groups and six individuals to the terrorist lists showed Colombia that the U.S. remains concerned about the terrorist threat landscape there.

When Blinken removed the FARC from the FTO and Executive Order 13224 lists on Nov. 30, 2021, he also added other Colombian-based groups and individuals[27] to the terrorist lists.

In the U.S. system of sanctions, there are three key consequences[28] if a group is listed as a terrorist organization.

Second, anybody who tries to do business with these groups may end up behind bars for up to two decades.

Third, anybody who is linked to a listed terrorist group can never set foot in the U.S. because of visa restrictions.

Blinken’s decision to remove the FARC from the FTO list, while simultaneously adding other groups and individuals, may signal that the Biden administration will use terrorist sanction tools in complex ways.

Instead of simply adding groups or individuals to the lists, the Biden team may be more willing to remove groups that have ceased violent activity in conflicts. In doing this, the Biden administration may improve the FTO list’s credibility by making it more dynamic and open to changing political climates and conflicts. It would also show there are benefits if listed terrorist groups and people engage in a political process.