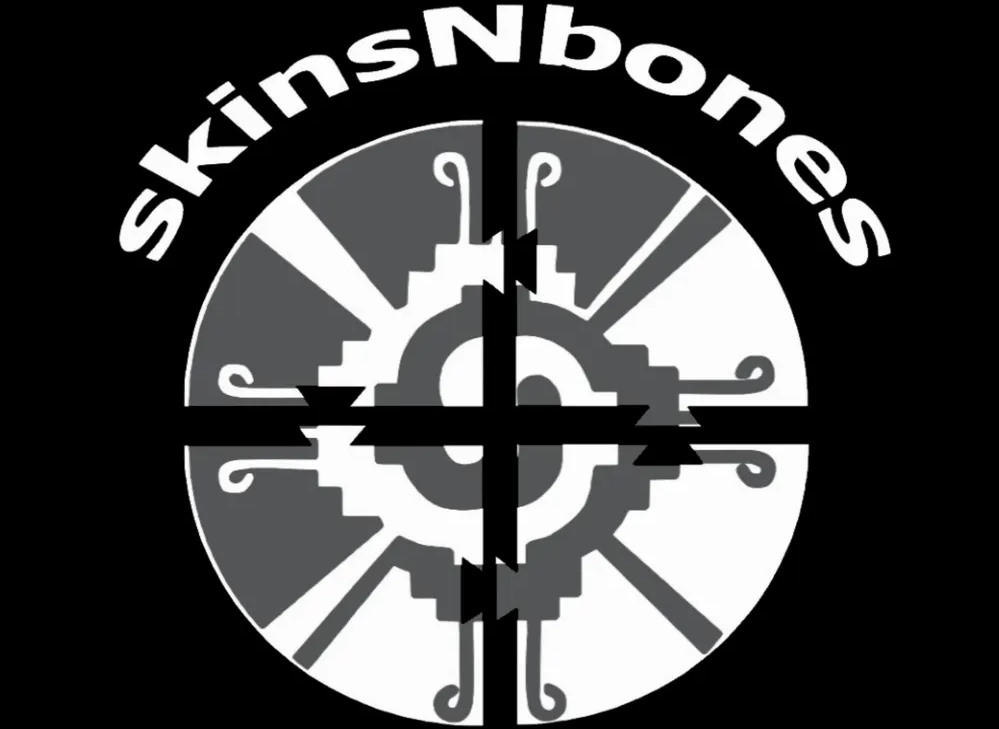 skinsNbones is a team-based musical collaboration formed to get Bones’ songs recorded. But Bones didn’t just have songs. She had a very broad musical concept involving global health that she’d been formulating based on all she’d learned at university in Health degree with a major component being global health of the population and environment. I’m still learning of parts of it, as it’s a large concept based on showing ways of being, as Bones says you can talk until your blue in the face and heart as the majority of people don’t really believe until it’s done, and explaining it takes longer than doing it as you can think so many more words than you can speak, and making her think about it stops her from just doing it by heart, when just doing something allows people to see for them Self, and the most powerful learnings are the ones you discover by your Self.

I think I know what she means. We’ve all done things by heart after doing something time and time again that we get to the point we don’t have to think about it, as we’ve got to the point where we can just do it by heart. We know the best musicians aren’t thinking about what they are playing, they’re feeling it, doing it by heart, after many many hard hours of dedicated practice, that includes lots of thinking about it. It’s a step-by-step process to do things by heart. Any master of any field got there through steps, steps of discovering what they can do.

In short, we’re using music to help change people’s perception step by step, to become curious, see and embrace difference, become more consciously awake to the world and their Self, discover what they can do, and step by step, at the individual’s own pace and choice, become healthier, happier and more at peace individually, through using loud rockNroll music globally. As, when added together, individual people are the world.

To try and get people to focus on the work and issues we raise more than who skinsNbones are we chose to be as faceless as possible, as for us the issues and current big world picture is what’s most important to be discussing, learning about and working on.

This project started, based on health, just before COVID hit and changed the world like never before. It was then that this became more than a just a music health-based project. It became a mission.

We started the project in December 2019 after getting another couple of musicians together and recording our first single, Is There Meaning? at Rocking Horse Studios with producer Paul Pilsneniks, who both play a major part in providing the live sounding, raw, solid rockNroll skinsNbones are known for. This single was released late January 2020 and distributed by Bongo Boy Records on one of their compilation albums.

However, one of the first collaboration’s members didn’t want to understand the project, wasn’t willing to listen to direction, instead trying to take control, was insulting to Bones and her work to put it mildly, showing no gratitude. The other member said he didn’t need to know what the songs were about and meant it when trying to explain how the lyrics were connected to a concept, yet after the release of our first single, Is There Meaning? said he didn’t want to be associated to skinsNbones due to our message, a message that got us noticed, is getting us academic attention, and is about helping bring health to the world. This prepared us for any people with similar “health problems”. Funnily, Bones concept already had upcoming songs to highlight and educate on these issues as part of the global health message.

As collaborators we always expected to work with others, plus knew this first collaboration wasn’t permanent due to lack of commitment, which creates more work for those who are committed. Health and happiness of those in skinsNbones is a part of the project and extends to our ethos of helping bring about global health, happiness and peace to individuals who make up the broader world. skinsNbones walk their talk in as many ways possible, including ensuring each individual is happy and at peace working with one another as group, while we provide as healthy and as fun of an environment as we can to work in. If a member isn’t happy to work on a song, we’ll find a song the whole collaboration we have at the time are happy to work on. Passion towards the work is important to us, as it comes through in the sound. We designed skinsNbones so that people could play what they enjoy, including the providing freedom to work in other bands. So, we happily started the second skinsNbones collaboration, having learned from the first about ways to improve our sound and strength of our team and ethos.

Our producer is part of our team and sound, so knows how we work and who will be an asset to our work and team, so introduced us to Gunnar, whose enthusiasm and heart equals his musical abilities. His love of groove and feeling is an added bonus. We then just had to find the right voice with the same heart and enthusiasm to finish off this evolution of skinsNbones.

Ever since Bones started song writing there was one vocalist she’d wanted to sing some of her songs, Jason Kafoa. She was speechless, for once, when she found out I’d performed with and knew him. He later let her know her songs had value. This validation was inspiring and invaluable at times when Bones was being told otherwise in years prior to this project. Jason has had a successful long and full career in music, so wasn’t approached initially due to his busy schedule. COVID very quickly changed that. Inspiration works in funny ways. It was strange and funny circumstances that gave Bones an opportunity to introduce the person who’d she always had wanted to sing her songs to the world, as the featured vocalist of skinsNbones.

We went back to the studio with our new team in May 2020 and recorded ‘Forever On’ and ‘There’s Reason’. Both these skinsNbones songs have been the highest charting independent act amongst labelled acts almost constantly.

‘Forever On’ was distributed by Bongo Boy Records in August 2020, submitted to the Grammy’s for nomination and made it through to the first round of voting, made it onto a compilation album, made worldwide charts and named a hit for making Top 10 in The World and Europe and hasn’t left the charts since entering. So, is still charting along with our current single ‘There’s Reason’ with both songs getting rave reviews.

‘There’s Reason’ was released by Bongo Boy Records the first week of January 2021, entering the charts three days before release date and making Billboard radio. This song has been described as an inspirational anthem of hope due to the message it delivers at a time it’s needed.

Bones’ innovative professor taught Bones very well but was inspired to see the academic work she’d trained others to do being applied in music and succeeding in getting the health message out at a time the world needs it. This academic backing to the work Bones had formulated due to her Health degree has made her more impassioned to get her work to reach and touch as many people possible at a time they can’t be touched, and get the health message to a larger audience quickly, as global health is needed more now than ever, and fast, and one of the quickest change agents known is music.

We’ll continue our mission to make the world a healthier place through our work which we keep as real and live as possible. We will work with other artists who strengthen our work and team but are very happy with this current line-up and look forward to heading back to the studio soon and releasing our next singles with this collaboration of very versatile talented committed musicians to bring what skinsNbones is known to deliver, tough Aussie rockNroll with inspiring global health messages.