Greye’s explosive new single “So Far So Good” is the perfect intro to the band’s new, harder-edged direction, an amped up way to experience all the dynamic elements Greye is known for.

This explosive new single “So Far So Good” is the perfect intro to the band’s new, harder-edged direction, an amped up way to experience all the dynamic elements Greye is known for – Hannah’s biting vocals, Jett Wolfe’s fiery guitarisma, Josh Reid’s buoyant bass grooves, Ray Grimard’s wild skinning and Ken-e Williams’ colorful key harmonies. Thematically, the track specifically taps into the band’s feeling about their journey as indie artists and the success they’ve had to this point – but Hannah’s lyrics offer some leeway that listeners can apply to personal relationships and even surviving (physically, emotionally, hell, even spiritually) the craziness of 2020 to this point.

“So Far So Good” is the highly anticipated follow-up to Greye’s visceral anthem “Lucky,” which garnered widespread critical acclaim and whose video currently has over 1.1 million views on YouTube. The track also hit #1 on the World Indie Music Chart Top 100, #2 on the European Indie Music Network Chart, #7 on De Ned Top 40 (from Ned.fm in the Netherlands) and #15 on the DRT Top 50 Rock Airplay Chart.

The song grew out of the ashes of another the band was working on that wasn’t working out. When they took a break, Jett came up with a clever riff he thought might work for that tune’s middle section. He shared it with the other members, and all agreed it was the perfect basis for what became the new song. Shortly thereafter, Hannah was driving through a car wash when these crafty lyrics hit her: “Are we on the same page, or are you busy reading somebody else’s book?” This starts the second verse of the “So Far So Good,” followed by: “Well I don’t know much about this, maybe it’s not what I think it is, but so far so good.”

From Hannah’s perspective, “So Far So Good’ explores “the uncertainty of life and the importance of living in the present. In the music industry, as with most other avenues of life, nothing is ever guaranteed. But instead of allowing ourselves to be destroyed by the pains of the past or frightened by the endless possibilities of the future, we should instead appreciate simply getting to make the journey.”

Don't worry about trying to pigeon hole this band into a specific genre, just give GREYE one listen or attend one live show - that's all you'll need, and you'll be on the GREYE-Train; Promise!lorida.  Breaking all of the so-called industry rules of musical "conformity" and cookie cutter cloning;" GREYE combines the best musical energy and style available anywhere today.  Hannah Summer and GREYE deliver song after powerful song; single handedly blazing a trail into the future of music. 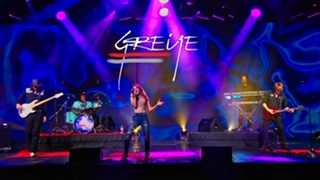