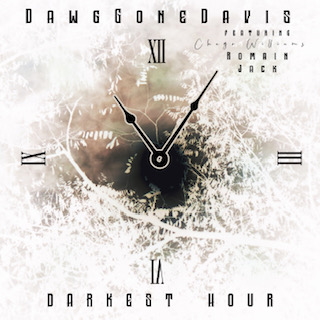 
Just a little over two years since Rebecca “DawgGoneDavis” first took the world (and the World & Euro Indie charts) by storm with her quirky and infectious debut single “Middle Age Woman – Hip Hop Style,” the Kansas City based artist, rapper, rocker and songwriter is digging deep, creating powerful, socially and spiritually conscious tracks that meet our collective angst of 2020 with power, conviction and yes, a slight tinge of hope.

In April, a seeming lifetime ago in the age of COVID-19, her powerhouse-Techno, high energy single “Weight of the World” – which she dubbed a “huge prayer and ask” for divine assistance during this challenging time – debuted at #4 on the Indie Euro chart. Now, as we dare to step into the second half of the year, she’s truly wowing us with “Darkest Hour,” her most incendiary, hard hitting track yet, featuring her inimitable rap and ablistering yet catchy chorus/hook and vocal feature by world-renowned Producer and Rapper, Chago G Williams. He blows the song out of the water!

For some of the core verses of “Darkest Hour,” DawgGoneDavis draws heavily on poetry she published in Technicolor Hans and Other Events, her first published book in 2009. She freestyles the self- deprecating lines “Ha! My brilliant bravado/Tis a rotten avocado” and then makes a personal reference to the town of Fallbrook, CA before sharing a line about grief and loss that rings even truer to our experience today: “Yo how can she be so sweet and yet so, so sour/It all boils down to one’s darkest hour. . .Wailing has been dealt/Feeling sorry for myself/Been a long slide down to this stricken hour…”

The track absolutely takes off when Chago’s first chorus kicks in: “It’s like a raging war, stuck in the darkest hour/With no lights at all who cares if we fail?/We’re stuck in the darkest day…” The second time the hook comes in, he poignantly adds, “The early days/Well, I’m losing my power and I just can’t walk away…”

Rebecca connects real loss to a universal sense of grief in her brilliant next verse that cleverly refers both to Don McLean’s “American Pie”: “Time to inject Mr. Don McLean/This my boy tears aren’t dry – cry through a levy/Floated a Chevy…Ruled by fishing, guitars and the Lord/A Chevy full of chickies bleated out chords.” Then, after Chago’s second chorus, she asks the question we can all relate to, especially now: “Hey now…how do you keep grief in check?/It takes years/But cuz I believed/A huge blessing received . . .I’m on the other side/What do I do now?” Later, she addresses a powerful spiritual dilemma: “What…another temptation? Tow the line or feel thedamnation.” At the end of the track, before a final callback to Don McLean, she invokes a bit of the spirit of “Weight of the World”: “Lord give us some pain in this form of power/A whopper of a loss…not so sane…”

“Though it originated in a real place, the song addresses the universal hardcore grief that we all experience in our lifetimes,” DawgGoneDavis says. “I’ve always had deep empathy for others who have suffered loss, and when I was working on ‘Darkest Hour,’ I thought not only about the current pandemic but also such national tragedies as the Sandy Hook school murders. In the end, because of my faith, I am thankful for any blessing that may pop through and I feel Jesus relieving me of my grief and sadness so I start to feel better. Hellmut and I were not quite finished with the track when the opportunity to work with Chago presented itself. His hook is incredible and really drives the point of the song home.”

With an international legion of fans from 16 to 70 and beyond hanging on her every crafty rhyme, clever twist of phrase and insightful, witty storytelling, DawgGoneDavis continues to make a resounding global impact. Driven by her hilarious, erudite, self-effacing and no holds barred approach to baring her soul – and now infused with the incisive bite of socialconsciousness - her tracks have received spins on an astounding 4500+ terrestrial, internet and satellite radio outlets throughout Europe, Asia, South America and the United States. Each of her songs has risen quickly on the World Indie Chart and Euro Indie Chart. In mid-2018, the multi-talented performer compiled her first nine hits into a collection perfectly titled after her respect for Neil Diamond music, Hot Dawgest Night.