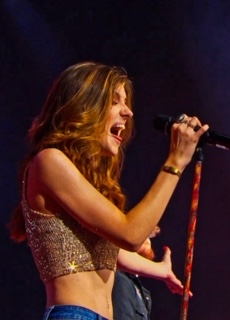 In 2012, I was 15 and headed into my sophomore year at Seabreeze High School in Daytona Beach, FL. I had tried (and failed) at being a theater kid during my freshman year and was desperate to find some other creative way to fill my elective slot. So, I signed up for a creative writing class, but when I checked my schedule on the first day of school I was completely devastated - creative writing was full. Instead, I had been placed in guitar class. The universe must have laughed that I was disappointed, because it was in that silly guitar class that my life would be forever changed by meeting Jett Wolfe, who would go on to become Greye’s guitar player.

There was only one kid I knew in the class and he happened to be friends with Jett, and with no other familiar faces in the room, Jett and I quickly hit it off.  I was (and still am) blown away by his talent.  My abilities on the guitar were mediocre at best, and Jett really helped show me how to play.  Soon after we’d been playing together in class, we received an assignment to write an original song.

Jett and I began writing the song in between classes, and once we had the music mostly strung together, I started working on the lyrics. (I wrote the words to “Grey” in my geometry class – no wonder I’m terrible at math).

Saying that the universe only placed one incredible human being in my path that year is a terrible understatement; it actually gave me four. Jett had known Joshua Reid, our bass player, from being in other classes together, and after we wrote “Grey” Jett invited him to jam around with us at lunch one day. Josh ended up joining us for the official performance in class (and we got an A!).

Shortly after our song received its grade, we found out the school was having a battle of the bands contest, which we entered as a trio called “Locals Only.” Josh happened to be taking shop class at the time, taught by Ray Grimard, who would become our drummer. Knowing that Ray was into music, Josh invited him to come see us perform. While Ray didn’t initially intend to come, by some twist of fate, he changed his mind. Though we placed second, our humble acoustic trio performance sparked Ray’s interest. A few days later, Ray approached us and told us he owned a recording studio and was a drummer and engineer when he wasn’t teaching. He asked Josh if he and “his trio” would like to come to his facility and jam with him.

The following week, we met at Ray’s studio. Ray had originally intended to help us develop a sound and then replace himself with an outside drummer. If we were going to record anything, he would serve as producer and engineer. The three of us loved his style though, and insisted he stay on in both capacities. Later he brought in his friend Ken-e to play keys and do backing vocals, and that was the group! We really never had a summit meeting about the direction of the music – our sound just grew so organically from the start.

We kept writing songs and eventually Ray felt they were good enough to record. We recorded 14 songs on our first album, “Providence,” which was very reflective of Jett’s, Josh’s, and my own influences at the time. As we got to know Ray and Ken-e better, their broader musical backgrounds really took over and became an integral part of our sound. I had always been infatuated with Broadway music, and Jett was into more folky, John Butler Trio type stuff, so Ray and Ken-e’s more classic influences were certainly a welcome addition.

Our first gigs were at Ocean Deck Restaurant and Beach Club and the outdoor amphitheater in Daytona Beach called the Bandshell. From there, we branched into local music festivals that were open to bands playing original music, and somewhere along the line we stopped having to ask promotors for gigs - they started coming to us. Considering that we currently have a schedule of 90-110 shows a year while still working day jobs, it’s hard for me to remember what it was like to not be as busy as we are.

It’s also interesting to think that all this started happening when the three of us were still in high school. I had my junior prom shortly after “Providence” was released, and the ballad on that record, “I Love You,” somehow got put forward to be the “slow dance song” at the prom. Talk about worlds colliding! From taking weekend trips to shoot a music video for “I Love You” with the incredibly talented Brett Bortle, to playing a gig the day of my senior prom, it’s funny to think how quickly we went back and forth between being high school students to rocking out on stage.
In a few short years, we went from just starting out to recording our fifth album “Under The Weather” at the legendary FAME Studios in Muscle Shoals, Alabama, and having our project mixed by multi-platinum engineer, Brian Reeves.

I think we all knew from very early on that we wanted Greye to continue well past high school, and though the three of us did go on to attend college, no one had to move away and there were no major life-altering events getting in the way of keeping the band alive and evolving. As we got busier and more money was coming in, we also accumulated bills related to licensing, printing CDs and booking studio time, maintaining a tour bus, and summer tours up and down the East Coast. Besides his great drumming skills and strong musical input, Ray’s professional history in the music industry really kept us grounded about the realities, financial and otherwise, of touring. Though they are older, the fact that Ray and Ken-e have always treated us as contemporaries has been invaluable.

Our time these days is balanced between day jobs, performing, writing, and recording. We owe so much to the support given to us by our wonderful manager, Karen Wardle, who wears just about every hat you could imagine and believes in us wholeheartedly.

On a personal note, one of the most important aspects of my creative development has been the confidence Karen and the band have given me to fully embrace my vocal and performance abilities. They have always seen something in me that until recently, I have found hard to see, and I am so grateful for their unconditional support. After closely studying some of the best classic front men (and women!) in rock history, from Kansas’ Ronnie Platt to Ann Wilson of Heart (the ultimate rock badass), I finally feel I have unlocked something truly special that has brought us to another level, and I can’t wait to share it, and Greye, with the world.