President Joe Biden often talks about the close relationship he had with his father and how this influenced him growing up as “the scrappy kid from Scranton[1],” Pennsylvania.

Biden was born into wealth, the son of a polo-playing yachtsman. But his father, Joe Biden Sr., lost his job after World War II and abused alcohol[2], struggling financially for years before getting back on his feet and finding middle-class work selling cars near Wilmington, Delaware.

Sunday, June 20, is Father’s Day. Biden’s relationship with his father contrasts with perhaps every president in the last four decades, who had either absent or distant fathers or abusive or alcoholic fathers or stepfathers.

“The measure of a man is not how often he is knocked down,” Joe Biden Sr. told his son, “but how quickly he gets up[3].”

His father’s support boosted young Joe’s political career, and offered comfort when Joe Jr.‘s wife and daughter were killed in a car crash.

On the 2020 presidential campaign trail, Biden remembered his late father’s belief that “there’s no higher calling for a woman or a man than to be a good mother or a good father[4].”

This will be my first Father’s Day without my own father, who died in August 2020 at age 95. He, too, believed in the calling of fatherhood. My father and mother were there for us. They encouraged us to follow our own dreams and not theirs.

This sort of supportive father-child relationship is common – except perhaps in politics.

Former congressional staffer and political journalist Barron YoungSmith once wrote an article for Slate with the headline, “Why Do So Many Politicians Have Daddy Issues?[5]” “American politics,” he wrote, “is overflowing with stories of absent fathers, alcoholic fathers, neglectful fathers.” 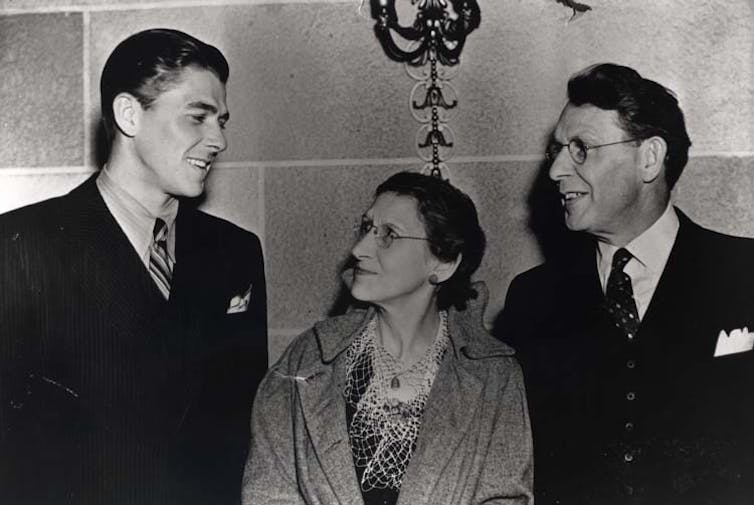 Ronald Reagan stands with his mother, Nelle, and his father, Jack. Levan Ramishvili/Flickr[6]

Jimmy Carter’s father, James Earl Carter Sr., was a high school dropout[8] who encouraged his son to read, a hard worker who urged his son to work hard, and a devoted husband and father. He served in the Georgia Legislature but died during his first term of pancreatic cancer at age 58.

Unlike other presidents, Jimmy Carter did not have to search for his father, who never left. Carter’s upbringing stood in contrast to both Ford, the man who preceded him in the White House, and Reagan, the one who followed him.

YoungSmith wrote that Ronald Reagan remained haunted[9] by the moment he found “his alcoholic father on the front porch … his hair filled with snow.” Reagan said his father was “drunk, dead to the world.” Reagan, who was then 11, had to drag his father into the house. He spent the rest of life trying to connect with a man who was not there for him[10].

Psychologist Robert E. Gilbert said Reagan can be properly understood only as the child of an alcoholic[11]. “Alcoholic parents leave deep marks on their children’s lives; even after those children become adults,” Gilbert said, adding that Reagan was aloof and distant, living in a world of make-believe[12] where he craved approval.

Bill Clinton’s biological father, William Jefferson Blythe Jr., died in a car accident before his son was born. Clinton was raised by a stepfather who was an abusive alcoholic[13] and regularly beat his wife, Clinton’s mother. The beatings stopped after Clinton stood up to his stepfather.

George H.W. Bush experienced the burden of having a great man as a father. His father, Prescott[14], was a Wall Street investment banker who became a U.S. senator and an influential leader in the Republican Party.

George H.W. moved to Texas to escape his father’s shadow[15]. He then relied on his father’s influential friends to make a fortune in oil before entering politics, where he served as a congressman, ambassador to the United Nations, director of the Central Intelligence Agency, vice president of the United States and then president. 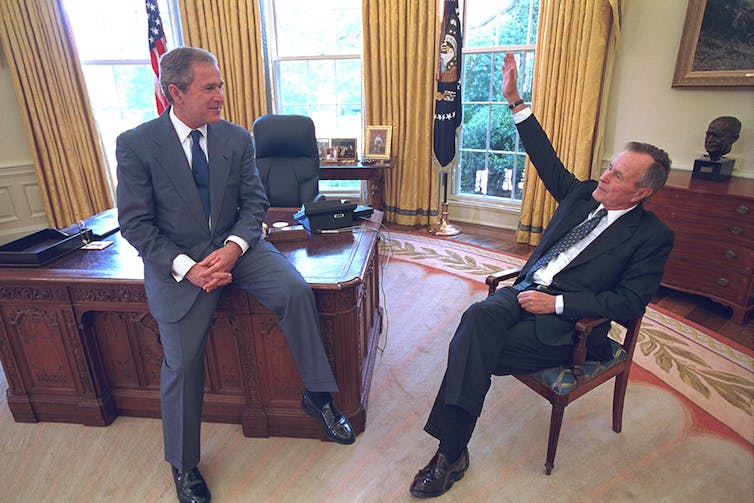 G.H.W. Bush’s oldest son, George W., responded to the pressures of having a great man as a father by drinking too much before quitting drinking[17] and using his father’s influence to help him become governor of Texas and then U.S. president. YoungSmith said that George W. “spent his entire life, including his presidency, careening between attempts to live up to H.W.’s impossible expectations[18] and efforts to garishly repudiate them.”

George W. Bush’s failures as president contributed to the election of Barack Obama, the first Black president. Obama’s parents separated when he was two, when his father left Hawaii and returned to his home country of Kenya. The father-son relationship became the basis for his autobiography, “Dreams from My Father: A Story of Race and Inheritance[19],” where he wrote about the difficulty of not having a father around to help him navigate the issues of being a Black man in a white-dominated country. 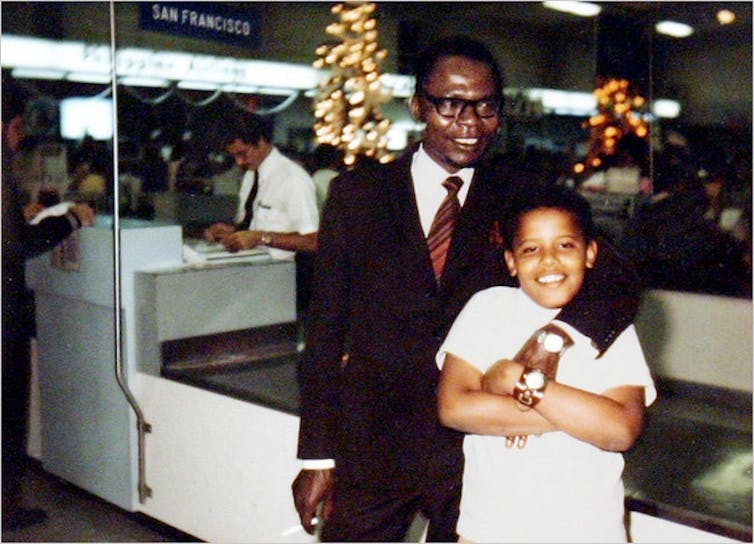 “It hardly bears recounting that President Obama built his political persona around a search for his absent dad[21],” YoungSmith said.

Obama was succeeded as president by Donald Trump, who once said he was “so screwed up[22], because I had a father that pushed me pretty hard.” 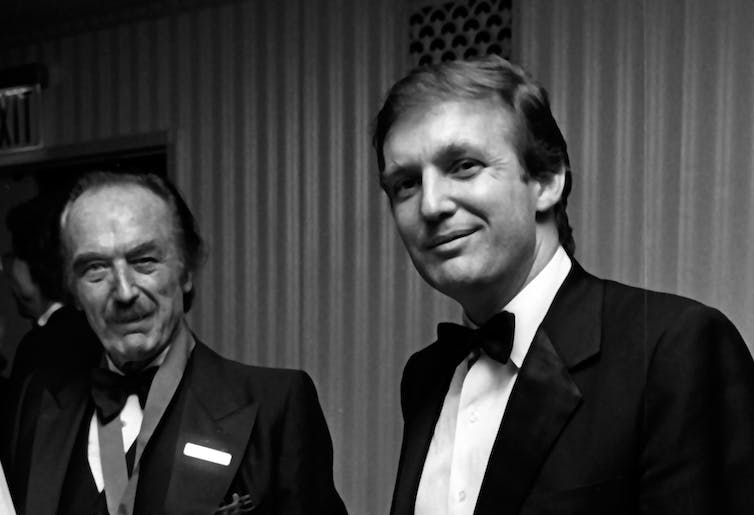 Fred Trump Sr., a real estate magnate, bullied and intimidated one son – Fred Jr., who died of alcoholism when he was 42. Fred rejected another son, Donald, sending him off to military school when he was 12. When Donald returned, Fred taught his son to be a “killer” in business[24], that the ends justified the means and that empathy was a sign of weakness.

“Freddy just wasn’t a killer[25],” Donald said of his brother.

Mary Trump, a clinical psychologist who was the daughter of Fred Trump Jr., said this lack of empathy prevented her uncle, Donald Trump, from acknowledging human suffering, including the widespread death associated with the coronavirus pandemic.

“Acknowledging the victims of COVID-19 would be to associate himself with their weakness, a trait his father taught him to despise[26],” Mary Trump wrote.

Biden, by contrast, talked openly on the 2020 campaign trial about his love for his father and about his own grieving over the death of his son, Beau[27], who died from brain cancer in 2015. In doing so, he made a very human and relatable connection between his own father, himself, and his own approach to fatherhood.