High school can be especially challenging for the 2%-3% of U.S. teens[1] who identify as transgender, or trans. They disproportionately experience harassment and victimization[2] by their peers and rejection by family members[3].

Entering an affirming and inclusive college environment can help set trans youth on a path of personal, academic and professional success.

A trans-affirming college can also be transformative for trans students who did not feel comfortable being out in high school, as well as those who do not begin to explore their gender identity until college.

My research with 507 trans and gender-nonconforming students[4] – 75% undergraduate, 25% graduate – examined which college policies and supports trans students most valued. I also looked at how these policies created a sense of belonging on campus.

I found that religiously affiliated colleges and community colleges tended to be less inclusive of trans students. Also, knowing that a school had trans-inclusive policies and supports led to a greater feeling of belonging and better perception of the campus climate. The students listed gender-inclusive restrooms, nondiscrimination policies that include gender identity and the ability to easily change one’s name on campus records as supports they valued most.

Based on these findings, here are a few key concrete things that trans students – and their families – may want to consider in the college exploration process.

Trans students can look for whether most campus buildings – especially those with heavy traffic, such as the campus center – have gender-inclusive restrooms. These may also be called gender-neutral or all-gender restrooms.

This kind of systemic inclusion can support students’ mental health[6] and academic achievement. For example, one study found that not having access to inclusive and comfortable restrooms was associated with poorer academic performance[7]. 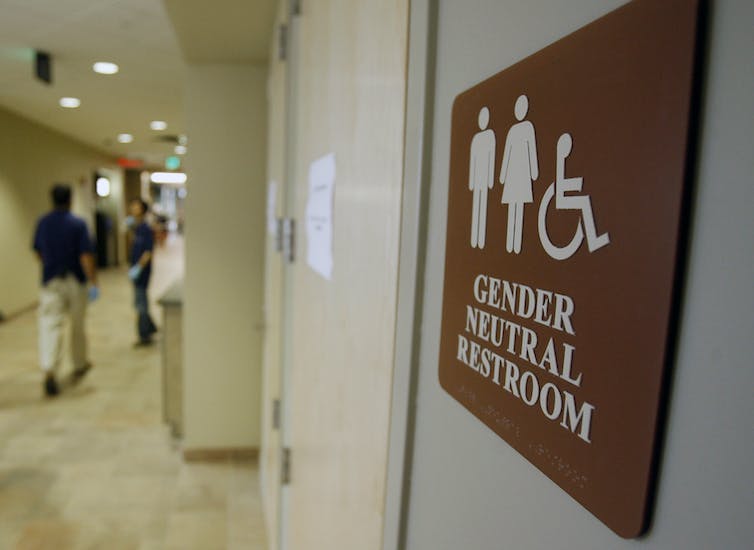 Gender-inclusive restrooms are one of the key college policies that trans students most value. Toby Talbot/AP[8]

Gender-inclusive housing refers to the ability to be housed in keeping with one’s gender identity, and to choose whom to room with – among returning students, at least – regardless of gender. According to Campus Pride, a nonprofit network of LGBTQ student leaders and campus groups, 271 colleges and universities[9] in the U.S. have gender-inclusive housing.

Prospective students may want to look at schools’ nondiscrimination policies to make sure they explicitly include gender identity and expression. Here’s a list[10] of the 1,071 colleges and universities that currently do. Such policies protect trans students from discrimination on the basis of gender identity and expression, and serve to symbolize the institutions’ commitment to fairness and equity.

Campus health care centers may or may not serve trans students’ needs, such as prescribing and overseeing hormone treatments. Likewise, trans students should find out whether the student health insurance covers trans-affirming medical care.

According to the Cooperative Institutional Research Program Freshman Survey, incoming trans college students tend to report poorer emotional health[14] than their peers who are cisgender, or cis – meaning their gender identity aligns with their assigned sex at birth. They are also more likely to anticipate seeking counseling[15] while in college. Therefore it may be important that the student counseling center is explicitly inclusive of trans people. This means, for example, having a counselor who identifies as trans, or at least a counselor trained on the needs and experiences of trans people.

Prospective students can also find out whether there is a campus LGBTQ student center or group, ideally with affiliate groups or clubs – for example, for trans students or queer students of color. It’s important to note that more niche groups may be harder to find at smaller institutions.

Some institutions offer or require training for staff, faculty and even students[16], such as peer advisers and student orientation leaders, on gender identity and the experiences of trans people. The level of awareness a campus community has about trans issues and people is closely related to classroom and campus climate for trans students.

My research has found that nonbinary students – those whose gender identities lie outside the male/female gender binary, as opposed to trans men and trans women – also face heightened and unique challenges[17] in college. They report chronic misgendering – being referred to as she/her or he/him instead of they/them – as well as an inability to accurately represent themselves on forms and paperwork[18].

Students may also be interested in examining whether faculty teach courses that are trans-inclusive and affirming, such as trans history[19] or trans literature. They can also look to see if the school has faculty research centers that focus on trans experiences[20].

Trans students often enter college with more financial concerns[21] than their cis peers. These may relate to hormone treatments and gender confirmation surgeries in addition to funding their college education.

Some schools have an emergency fund for trans students[24] in need of basic assistance, or other free on-campus resources such as “clothing closets[25]” for trans and gender-noncomforming students.

Other questions to ask

A number of other markers of trans inclusion can be harder to immediately assess.

Prospective students can ask tour guides and student ambassadors about whether there are any trans people in student government, the overall climate for trans students and whether campus events frequently include issues of interest to trans students[26], including trans speakers. 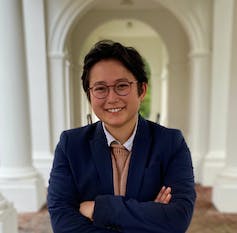 Other features to look for are campus task forces or committees[28] that address and include trans people, the presence of trans faculty and staff, and specialized student orientation content or modules for trans students.

It may also be possible to be connected to current trans students or recent alumni to hear about their experiences and ask about anything else that a prospective trans student should know.