It’s hard to know how many people actually believe the key tenets of QAnon’s claims[1], including that devil-worshipping, cannibalistic pedophiles are somehow running the world. Its adherents have caused violence and insurrection, as happened at the U.S. Capitol on Jan. 6, and had raised concerns about a second attack on March 4. Both the FBI[2] and the Department of Homeland Security[3] have released bulletins warning of the possibility of future violence from domestic terrorists, potentially including QAnon followers.

If lots of people follow QAnon, is it the case that – as one pollster put it – a significant portion of the American electorate has gone “bonkers[4]”?

As a researcher[5] who analyzes surveys and polls to learn about Americans’ thinking and behavior, I try to remember that surveys alone can’t necessarily provide the entire picture of public sentiment, especially about a potentially dangerous internal threat.

How much support does QAnon have?

There has been a lot of polling about QAnon, aimed at figuring out how much fear it is reasonable to have about the Americans who have abandoned themselves[6] to darkly fantastic[7] speculation[8] with a demonstrated potential for violence.

One such project is here at Indiana University’s Observatory on Social Media[9], where we have been studying how falsehoods and conspiracy-type ideas spread online and how much people say they believe them[10].

We found wide support, sometimes over 50% and highly partisan-motivated, for many falsehoods such as unfounded concerns about Joe Biden’s cognitive abilities and unsupported fears about fraud during mail-in voting. But the spread of ideas online, and people’s endorsement of them in polls, doesn’t give the whole picture.

However, NBC News polls[13] that same month found that more than half of registered voters had no idea what QAnon was, and that only 3% of the respondents had a positive view of it.

A December poll of Americans from the polling firm Ipsos[14] asked whether people thought specific QAnon teachings were true and found that 17% thought the core belief was true – that “a group of Satan-worshipping elites who run a child sex ring are trying to control our politics and media.”

By January, as QAnon was getting more attention in the media, a YouGov poll[15] found that 37% of registered voters in the U.S. had heard of QAnon. Yet of those, only 7% believed its allegations were true – or about 2.5% of American voters.

A late January Morning Consult poll[16] found that QAnon believers were “jumping ship[17]” after the Capitol riots, with 24% of Republicans saying they believed QAnon’s claims, a decrease from the October result of 38%.

So, a fair number of people have heard of QAnon – which is not a surprise, given the news coverage – but the number of people who thought its key claims were true may have peaked in December 2020 and may now be closer to smaller preelection levels of support. Even given that there can be large differences in how survey researchers ask questions, these variations are notable. 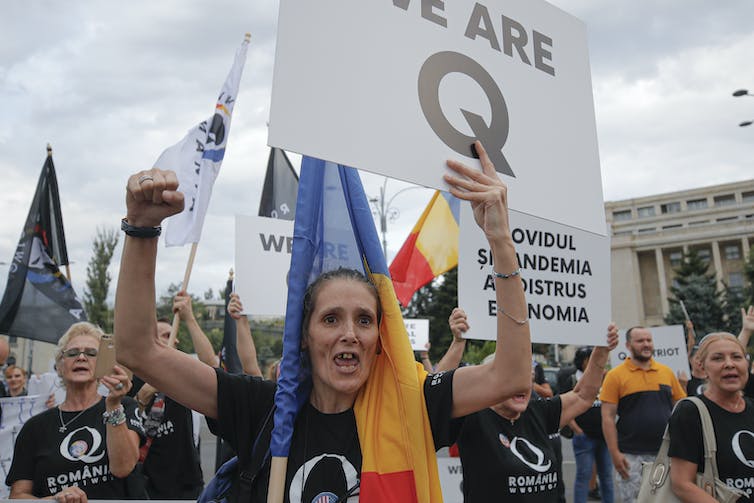 QAnon has followers around the world, including these people in Romania. AP Photo/Vadim Ghirda[18]

As useful as survey data is, it is difficult to go from that to more nuanced questions, like what portion of respondents are true believers, versus which of them might act on that belief – and which of them are giving quick answers that seem to fit with their current thoughts or beliefs. As a result, surveys cannot replace the real forensic work that is needed to know how many QAnon “members” there really are.

There isn’t a formal QAnon organization to ask for its membership numbers, the way there is for a political party or even a charity that tracks how many donors give money each year. In many ways, it is an online group from which people can come and go at any moment. Nevertheless, it’s possible to look at some indicators of how many people might closely associate themselves with QAnon.

A September 2020 Tufts study[19] found that 3.4% of survey respondents self-identified as members of a QAnon Facebook group. At that time, Facebook was starting to remove QAnon[20] profiles, eventually reaching 78,000 removals. Other recent research[21] tells us that “support for QAnon is meager and stable,” revealing a “vast chasm between news coverage and polling data.”

So far the research hasn’t truly revealed a clear picture of how many QAnon followers there are. But important decisions are now being made about the perceived threats, such as whether there should be a domestic terrorism law[22], whether the Communications Decency Act should be changed[23] and larger questions about how social media and the public sphere should be regulated[24].

It’s not enough to use poll data to make these decisions. Americans need more information about the actual extent of the threats, as well as time to discuss whether proposed responses are proportional and likely to be both constitutional and effective. That information could come from police investigations, an independent investigative commission or other forensic work to evaluate the scope of the threat.