Some 156 years after the end of the Civil War and the official abolition of slavery through the 13th Amendment[1], the idea of reparations is gaining currency in Washington.

On March 1, Cedric Richmond, a senior adviser to President Joe Biden, suggested the White House could “start acting now[2]” on the issue[3]. The comment comes just weeks after a House committee chaired by Rep. Sheila Jackson Lee, Democrat of Texas, heard testimony[4] on H.R. 40, a bill that would establish a commission on the legacy of slavery that would look at possible payments for descendants of enslaved people of African descent.

Having researched slavery[5] for the past three decades, I have concluded that there are many rationales for reparations. There has never been a leveling of the playing field, or payments for the debt of unpaid labor over 250 years of slavery. Furthermore, Black contribution to the wealth of America[6] has not been acknowledged or given its due, in spite of the fact that the Southern planters and Northern manufacturers who helped shape the nation were made rich by turning raw commodities harvested by enslaved people into commercial empires. 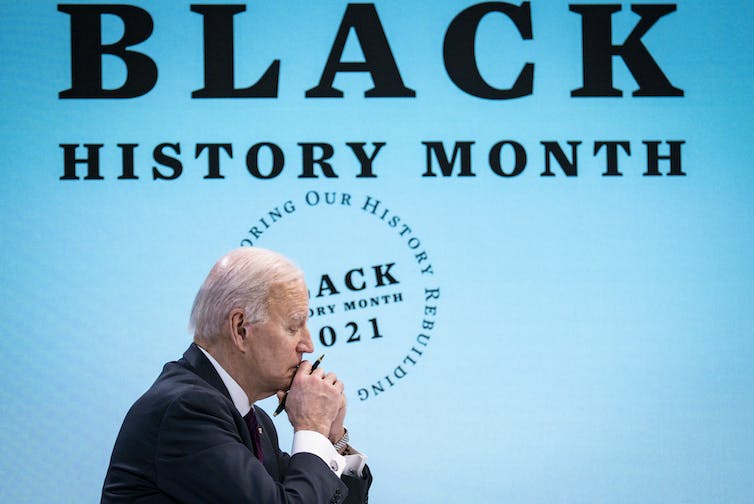 Will Joe Biden be the president to usher through reparations for slavery?. Pete Marovich/Pool via Getty Images[7]

But there is an additional reason that looking at reparations now makes sense. At a time when Biden is trying to rebuild America’s image overseas[8], reparations for this unpaid debt could, I believe, drastically improve the United States’ international standing and serve as an example to other nations on how to deal with past inequities.

Campaigns for reparations have a long history. President Abraham Lincoln, who was known as “The Great Emancipator” in large part because he heeded the calls of Black abolitionists like ex-slave Frederick Douglass[9] and signed the Emancipation Proclamation in 1863[10], was also a key advocate for a form of reparations.

Under Special Field Order No. 15[11], issued with Lincoln’s blessing in 1865, newly emancipated slaves were to receive “forty acres and a mule.”

Some freed slaves had already received their 40 acres[12] at the time Congress passed the bill.

But this promise was not kept. After Lincoln was assassinated, President Andrew Jackson promptly vetoed the bill[13]. According to noted economist William Darity[14], the cost of reneging on the promise to Black Americans was land worth more than US$1.3 trillion in today’s dollars[15].

While efforts to compensate Black former slaves were thwarted, remarkably, some white slave owners seeking compensation for the end of slavery were more successful. Through 1862’s District of Columbia Compensated Emancipation Act[16], slave owners were paid for their lost “property.”

After the reversal of early efforts to compensate people of African descent, Southern states continued to put in place policies to maintain white supremacy.

What followed were decades of institutional marginalization[17] under Jim Crow segregation[18] that further impeded Black progress. Racist housing policies[19], employment practices[20] and inequitable education[21] made it harder for Black Americans to accrue wealth.

During this period, calls for reparations continued. Ex-slave Callie House[22] of Nashville, Tennessee, launched an ambitious reparations campaign in the 1890s calling on the government to pay pensions to formerly enslaved people[23].

A 1915 lawsuit against the U.S. Treasury[24] calling for $68 million to be paid to former slaves for unpaid labor was dismissed on the grounds of “sovereign immunity,” under which a state is immune from civil action. And political activist Marcus Garvey[25] in the 1920s made reparations central[26] to his Universal Negro Improvement Association movement. 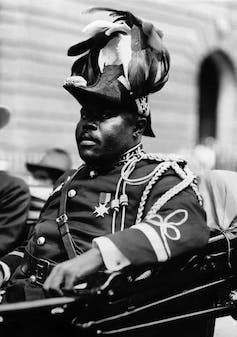 Marcus Garvey made reparations central to his campaigning. Ullstein bild via Getty Images[27]

But the debt to Black Americans for the uncompensated labor of their ancestors was not paid. Moreover, the economic outcomes of sanctioned racism[28] under Jim Crow meant that this debt only increased.

The protests and advocacy of the civil rights movement in the 1950s and 1960s bore great fruits, but no reparations.

But inequities persisted, and, with them, the debt owed. Black and brown bodies were – and still are – disproportionately caught up in the criminal justice system[31]; Black families are less likely to own their own homes[32]; and public education has failed far too many Black youths[33] – all of which has far-reaching ramifications for employment, career success and accumulating wealth. Again, the original unpaid debt has been compounded.

But calls for reparations never went away. In October 1962, the pioneering civil rights activist Queen Mother Moore[34] helped draft a “Resolution for Reparations[35]” that was promoted in the U.S. and around the world.

The organization N'COBRA[36] has, since the 1980s, been campaigning for reparations. More recently there has been author Ta-Nehisi Coates’ 2014 article “The Case for Reparations[37]” and calls from groups such as the National African American Reparations Commission[38] along with some Black church leaders[39]. There has been some success on a local level[40], but no action on a federal one.

Another campaign for reparations has been successful – the one for the Japanese American citizens[41] interred during World War II.

After the bombing of Pearl Harbor in 1941, President Franklin Delano Roosevelt sent tens of thousands of Japanese Americans to internment camps[42]. In the years after the war, advocates, including the children and descendants of those interred, launched a lengthy campaign, ending with President Ronald Reagan’s making a formal apology and signing 1988’s Civil Liberties Act[43], through which each survivor was paid $20,000 each, around $44,000 in today’s money. 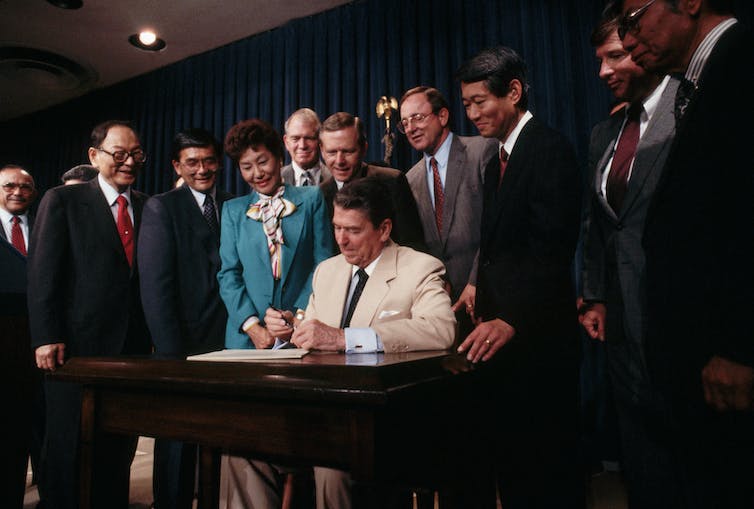 The Civil Liberties Act of 1988 could serve as an example. Wally McNamee/Corbis Historical via Getty Images[44]

The campaign for reparations for people of African descent could proceed similarly: a bill, a formal apology and compensation, which could include measures aside from just payment checks – such as education and housing funds, or reforms in the criminal justice system.

The renewed focus on reparations comes at a pivotal time in recent U.S. history. Long considered, rightly or wrongly, as a beacon of democracy and freedom, the U.S. has in the past four years presented a different face to the world amid a retreat into “America first[45]” policy.

Meanwhile, the recent attack on the Capitol[46], the killing of George Floyd[47] at the hands of police and racial disparities highlighted in the pandemic[48] have raised concerns about the fragility of American democracy and have put the lasting legacies of structural racism in the U.S. on full display.

Paying reparations to Americans of African descent could, I believe, help the U.S. reclaim some moral leadership on the global stage. The U.S. is not the only country in the world with human rights abuses then or now, but it can be one of the few countries in the world that truly addresses these wrongs.

In other words, the U.S. can lead by example.