Many of the streams that people count on for fishing, water and recreation are getting warmer as global temperatures rise. But they aren’t all heating up in the same way.

If communities can figure out where these streams will warm the most, they can plan for the future. That has been difficult to predict in the past, but a new method involving temperature patterns may make it easier.

People have widely assumed that streams fed by substantial amounts of groundwater are more resistant to climate change than those fed mostly by snowmelt or rain. It turns out that this groundwater buffering effect varies quite a bit. The depth of the groundwater affects the stream temperature response to warming, which in turn affects the habitats of fish and other wildlife and plants.

In a study published March 4 in the journal Nature Communications[1], my colleagues and I describe a simple, inexpensive method that allows communities to look at the temperature history of a stream compared to local air temperature to gauge the depth of the groundwater feeding into it and, from there, assess its risk as the climate changes.

While a few degrees of temperature change may not seem like much, the majority of animals living in streams and rivers cannot regulate their own body temperatures, so they move around in the environment to find suitable habitats. Many have adapted over time to a narrow range of temperatures. For example, when the waters are warm, especially during hot summer months with low water flow, fish like salmon and trout that live in colder waters must seek out colder water or perish. These ecological effects can have cascading consequences – for wildlife, humans and local economies.

Most streams flow all the time. During times without rainfall, water in streams mostly comes from below ground. In fact, groundwater is thought to make up an average of 52% of surface water flow across the United States[2].

Because groundwater is typically colder than surface water in summer, the groundwater flowing into streams can buffer the overall stream temperature from climate warming. However, deeper groundwater tends to have more stable temperatures than groundwater closer to the surface. 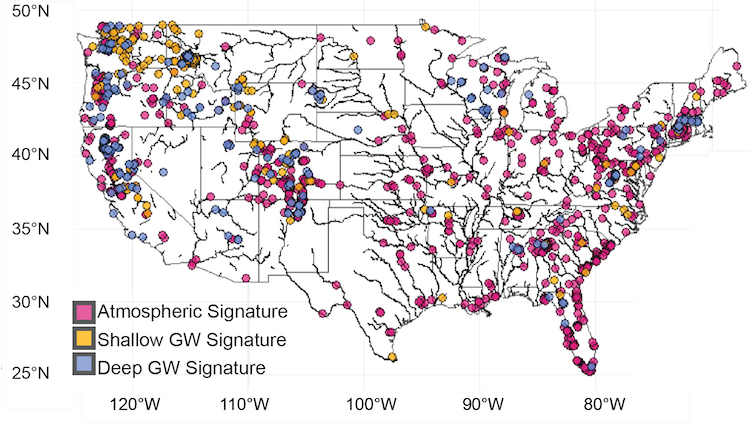 A new technique can classify whether the water flowing into streams is primarily from groundwater and whether that groundwater is from shallow or deep sources. Danielle Hare, CC BY-ND[3]

Previous studies have shown that groundwater temperature[4] is tied to the depth that it travels. Shallow groundwater is more readily influenced by climate variability[5] because it’s close to the land surface. It is also more susceptible to drying,[6] which can reduce, or even disconnect, the shallow groundwater flow from the stream.

Our research builds on these observations. We found that streams with shallow groundwater sources are likely to be warming as much as streams fed mostly by snowmelt and rain, and at similar rates.

Figuring out a stream’s risk

Looking at temperature patterns can provide more information about the risks streams might face.

We found that when the temperature of a stream follows the same warming and cooling pattern as the air temperature, with a time lag of about 10-40 days, that stream is likely being fed by shallow groundwater. Deeper groundwater stays cooler in the summer and the stream’s temperature doesn’t fluctuate as much. 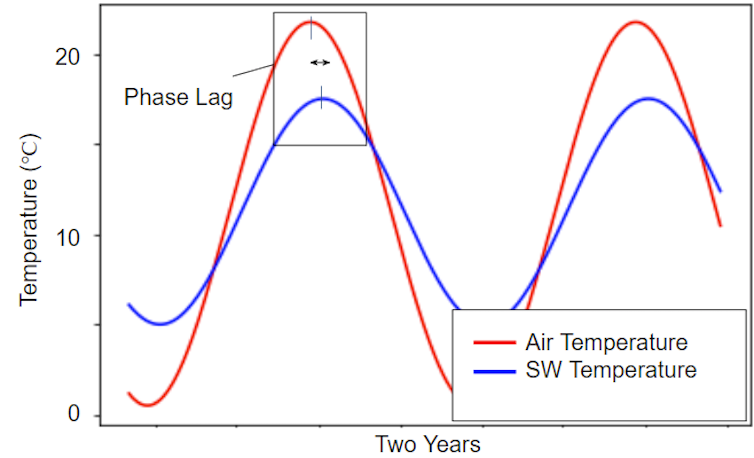 When stream water temperature follows the same warming pattern as local air temperature, but with a lag of about 10 to 40 days, it’s a sign that the stream is fed by shallow groundwater. Danielle Hare, CC BY-ND[8]

We analyzed the water and air temperature at 1,424 sites along streams across the United States and found that approximately 40% of the streams were strongly influenced by groundwater. Of those, we found that half were fed predominantly by shallow groundwater, which was much higher than expected. Comparing this method’s results against field and modeling data[9] in smaller studies has shown its rigor.

[Understand new developments in science, health and technology, each week. Subscribe to The Conversation’s science newsletter[10].]

Because this method requires only stream and air temperature data, landowners and local communities can gather the data at little cost, or it may already be available. Once that information is known, they can plan for future changes and take steps to protect the water quality in streams that are most likely to provide long-term stability.