While experts debate[1] whether the U.S. Capitol siege was an attempted coup, there is no debate that what happened in 1898 in Wilmington, North Carolina, was a coup – and its consequences were tragic.

These two events, separated by 122 years, share critical features. Each was organized and planned. Each was an effort to steal an election and disfranchise voters. Each was animated by white racist fears.

And each required the help of the media to be successful.

Those who study Reconstruction and its aftermath know the U.S. has deep experience with political and electoral violence. Reconstruction was the 12-year period following the Civil War when the South returned to the Union and newly freed Black Americans were incorporated into U.S. democracy.

But few understand that the Wilmington coup[2], when white supremacists overthrew the city’s legitimately elected bi-racial government, could not have happened without the involvement of white news media. The same is true of the Capitol siege on Jan. 6, 2021.

The news media, it turns out, have often been key actors in U.S. electoral violence. This history is explored in a chapter one of us – Gustafson – wrote for a book the other – Forde – co-edited with Sid Bedingfield[3], “Journalism & Jim Crow: The Making of White Supremacy in the New South,” which comes out later this year.

In 1898, Charles B. Aycock[4] wanted to become governor in North Carolina. A member of the elite class, Aycock was a leading Democrat, which was the party of white supremacy in the South[5] before the mid-20th-century political realignment that produced today’s parties[6].

Known as Fusionists[7], they rose to power in the executive branch, the legislature and the governments of several eastern towns, but most importantly, the thriving port city of Wilmington, then the largest city in North Carolina. 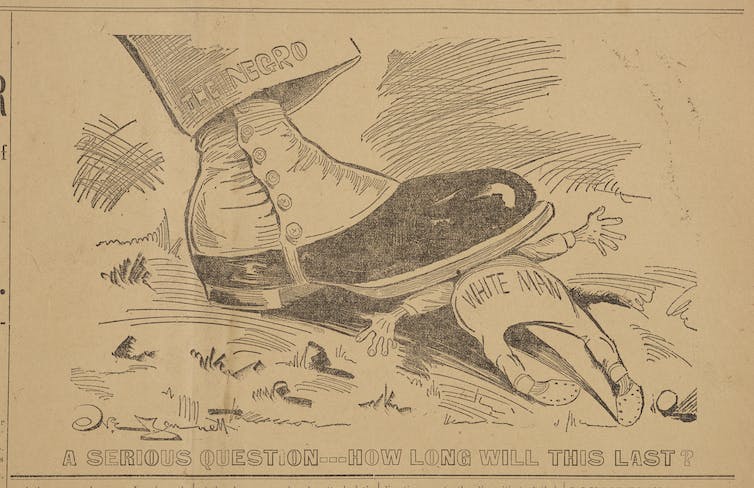 Wilmington, with its majority Black population and successful Black middle class[9], was a city that offered hope for Black Southerners. Black men had higher rates of literacy than white men, ran some of the city’s most successful businesses, such as restaurants, tailors, shoemakers, furniture makers and jewelers, and, to the dismay of Democrats, held public office.

Democrats, seething over their loss of power, were determined to get it back in the state election of 1898[10].

Aycock joined forces with Furnifold Simmons[11], a former U.S. representative who served as the party’s campaign manager, and Josephus Daniels[12], the editor Raleigh’s News & Observer[13] newspaper. Together they hatched a plan.

Using anti-Black disinformation[14] spread through newspapers and public speeches across the state, they would whip up white racial fears of “Negro domination” and “black beasts” that preyed on the “virtue” of white women. The goal: drive a wedge in the Fusionist coalition and lure white Populists back to the Democratic fold.

[Get the best of The Conversation, every weekend. Sign up for our weekly newsletter[15].]

The press and political power

The News & Observer[16], the most influential newspaper in the state, was the Democratic Party’s most potent weapon. Its editor called it “the militant voice of white supremacy.”

For months in advance of the November election, the paper ran articles, editorials, speeches and reader letters telling lies about Black malfeasance, misrule, criminality and sexual predations against white women. White newspapers across the state, from big cities to tiny hamlets, republished the News & Observer’s content.

“The prevalence of rape by brutal negroes upon helpless white women has brought about a reign of terror in rural districts,” the paper said[17]. Daniels admitted years later this claim was a lie.

Knowing the power of images, Daniels hired a cartoonist to create viciously racist images for the front page.

Roughly a year after Rebecca Latimer Felton[18], a prominent white Georgian, gave a speech advocating the lynching of Black men for their supposed assaults on white women, white newspapers across North Carolina reprinted and discussed it for days to gin up racist hostility.

At the same time, the Democrats organized the Red Shirts[19], a paramilitary arm of the party, to intimidate Black citizens and stop them from participating in politics and, eventually, voting.

Alexander Manly[20], the editor of the Black newspaper The Daily Record in Wilmington[21], then the only Black daily in the country, decided to fight back.

To counteract the lies the Democrats and Felton told about Black men as “beasts” and “brutes,” Manly told the truth in a bold editorial[22]: Some white women fell in love with Black men and, if these affairs were discovered, the inevitable outcome was the label “rape” and a brutal lynching. The grandson of a white governor of North Carolina and a Black woman he enslaved, Manly knew white hypocrisy well.

Democrats went wild, reprinting Manly’s editorial in newspapers across the state and attacking him for insulting the “virtue” of white women. 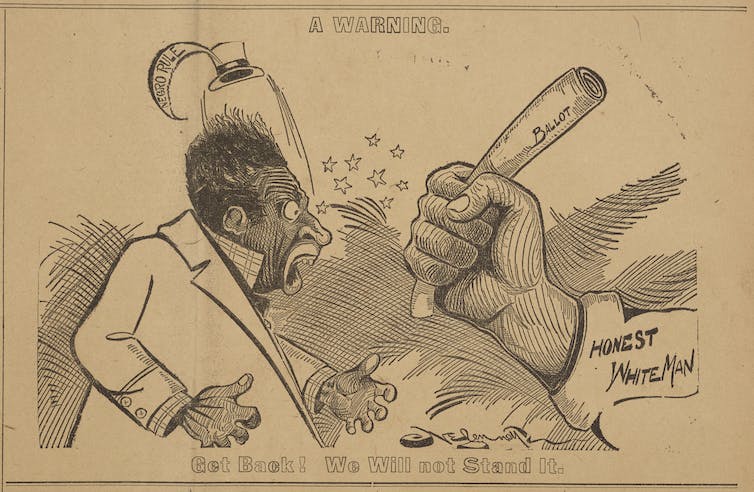 As the election approached and Red Shirts patrolled the state, Democrats laid their final plan.

Because there were few local elections in Wilmington in 1898, and Democrats viewed the city as the center of “Negro domination”[24] in the state, they began organizing in early fall to overthrow Wilmington’s bi-racial government and install all white officials.

After stealing the state election through fraud and violence[25], the Democrats sent a massive group of Red Shirts into Wilmington.

They murdered an untold number of Black men in the street; burned Black businesses, including Manly’s newspaper office; terrorized the Black community, forcing at least 1,400 people to flee, many never to return; and removed and exiled all Fusionists from office, installing white Democrats in their stead.

Early in the new century, Aycock sat in the governor’s office. Black citizens were disfranchised by constitutional amendment[26], ushering in white supremacist, one-party, kleptocratic rule that lasted at least through the Voting Rights Act of 1965[27].

Across the past four years, the overwhelmingly white right-wing news media[28] spread lies that President Donald Trump and his allies churned out daily. Social media companies[29] helped turn these lies into a contagion of mass delusion that radicalized a significant swath of the GOP base.

Since President-elect Joe Biden’s victory in November, Trump and his political and media allies have relentlessly pushed the massive lie that liberals stole the presidential election[30].

Like press involvement in the murderous events in Wilmington long ago, today’s media played an essential role[31] in deluding and inciting supporters to violence in the attempt to steal an election.