The well-deserved tributes to Ruth Bader Ginsburg in the wake of her death justifiably focus on her transformational role in ending centuries of legal discrimination against women.

Starting in 1971, Ginsburg won five cases before the Supreme Court based on the equal protection clause of the Constitution’s 14th Amendment[1]. Those cases led the court to end blatant discriminate against women.

She was not the first woman who attempted to use the 14th Amendment to achieve equality. Yet her legal theories, determination and brilliant litigation strategy won, where others before her had failed.

It is less known that Ginsburg’s victories on behalf of women also provided a roadmap and legal precedent for ending legal discrimination against the LGBTQ community. 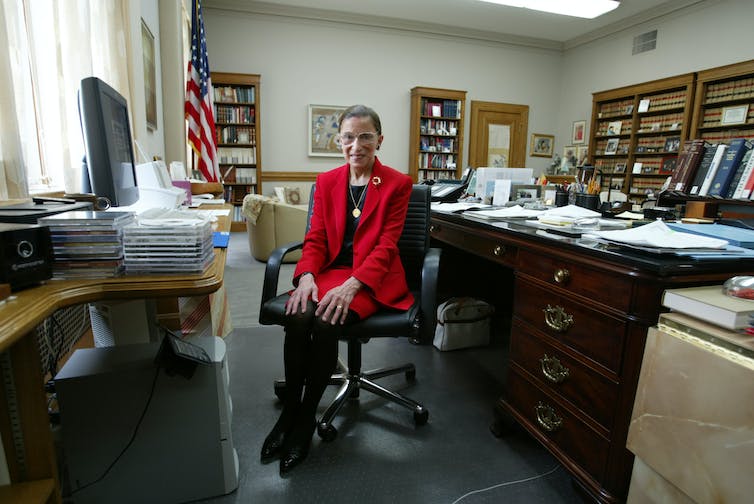 The 14th Amendment was enacted after the Civil War[3], in 1868, to give formerly enslaved Black people and their progeny equal protection under the law. It states, in part: “No State shall make or enforce any law which shall abridge the privileges or immunities of citizens of the United States; … nor deny to any person within its jurisdiction the equal protection of the laws.”

Women’s rights advocates immediately tried to use the 14th Amendment’s broad language to gain rights. At the time that the 14th Amendment was enacted, women could not own property or vote and were considered their husbands’ property.

They focused on the 14th Amendment’s broadly worded “privileges and immunities” clause as a way to gain some form of legal protection. Because that clause had no fixed meaning, it could be interpreted, they believed, in a way that advanced women’s rights.

So, in 1872, Myra Bradwell sued the state of Illinois[4] after being denied a license to practice law because she was a woman. Ruling against her, the Illinois Supreme Court held that Bradwell did not legally exist separately from her husband, and that the privilege and immunities clause did not require the state[5] to allow her or any other woman to pursue a professional career.

Similarly, in 1872, activists, including Susan B. Anthony, invoked the 14th Amendment to demand the right to vote. Anthony and several others were arrested after they voted in the November election. At Anthony’s trial[6], the judge said “The 14th Amendment gives no right to a woman to vote, and the voting by Miss Anthony was in violation of the law.”

One woman in Missouri, Virginia Minor, sued when she was refused the right to even register to vote. She argued before the U.S. Supreme Court[7] – through her lawyer husband – that the 14th Amendment guaranteed her the right to vote as a “privilege and immunity.”

Credit where it’s due

A century later, Ruth Bader Ginsburg’s work transformed American jurisprudence for women. To do this, she also invoked the 14th Amendment. But this time, she focused on the amendment’s Equal Protection Clause, which was enacted to protect newly-freed enslaved people.

Ginsburg did not devise this strategy alone. She was inspired by the writings of the African American lawyer and civil rights activist, Anna Pauline “Pauli” Murray[8]. Murray, a co-founder of the National Organization for Women[9], argued that the 14th Amendment’s equal protection clause could be used to guarantee gender equality. 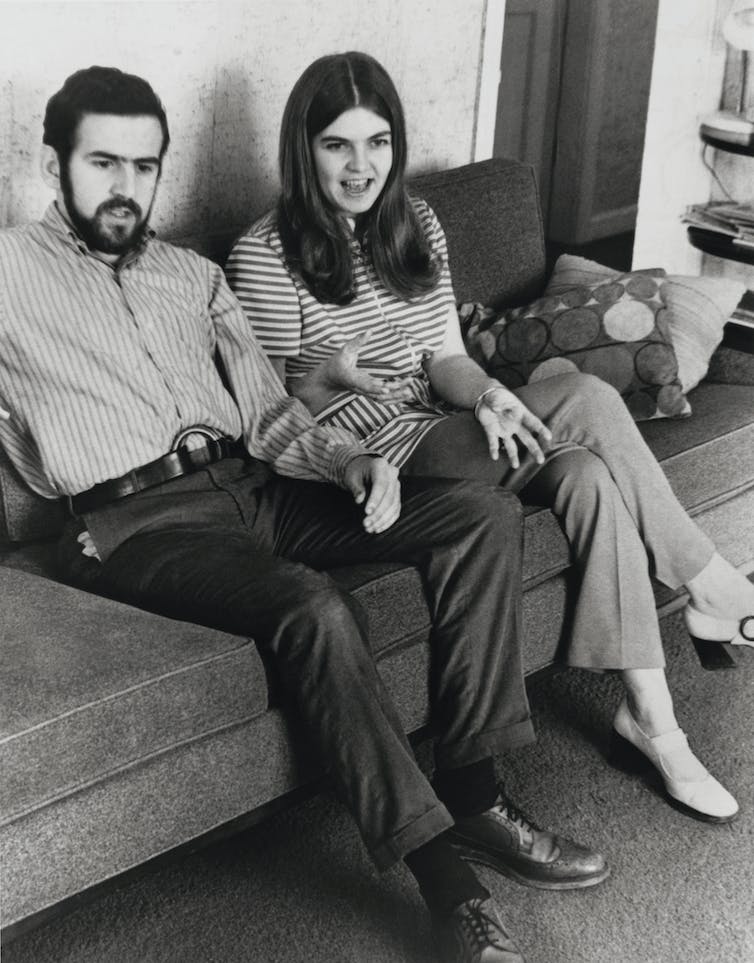 Joseph and Lt. Sharron Frontiero. Ginsburg successfully brought a 1973 case on behalf of Joseph, who was denied military benefits on the theory that women could not be primary economic providers for their families. Bettmann/Getty[10]

Murray’s 1950s book, “States’ Laws on Race and Color[11],” was considered the bible of the civil rights movement[12]. Ginsburg was so influenced by Murray’s work that she listed Murray as a co-author of her first U.S. Supreme Court gender justice brief, Reed v. Reed, in 1971[13].

The legal strategy that Ginsburg used, however, was her own.

In 1971, the notion of women’s equality was absurd to most people. Ginsburg, who was at the top her her class at Harvard and Columbia law schools, could not get a job after she graduated[14].

For example, in the 1973 case, Frontiero v. Richardson[15], she successfully sued on behalf of the husband of a female Air Force officer, who was refused military benefits on the theory that women could not be primary economic providers for their families.

Similarly, in Weinberger v. Weisenfeld[16] in 1975, she sued on behalf of a man who had been denied Social Security survivor benefits. That agency automatically assumed that men would not need survivor benefits because they earned more than their wives.

This was a brilliant strategy. Based on the five lawsuits that Ginsburg won, the Supreme Court articulated for the first time that the 14th Amendment was not only the vehicle for racial equality – it could also be invoked to achieve gender-based equality.

Even after Ginsburg’s victories in the 1970s, women still did not have equal rights under the law. The equal protection women enjoyed, according to the Supreme Court, wasn’t as strong as the protection that the Constitution afforded against racial discrimination.

It wasn’t until over 30 years later, in 1996, when she was a sitting justice on the U.S. Supreme Court, that Ginsburg fully equalized the playing field for women.

In the case United States v. Virginia Military Academy[17], Justice Ginsburg wrote for the court’s majority that “exacting scrutiny” must be applied to any law that treats women differently than men.

She wrote that any law that “denies to women, simply because they are women, full citizenship stature - equal opportunity to aspire, achieve, participate in and contribute to society” violated the equal protection Clause. 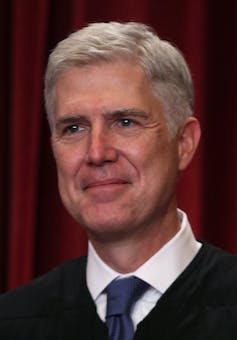 Once it was cemented into law that the equal protection clause could overturn non-race-based discriminatory laws, other marginalized groups began using the Equal Protection Clause to gain equal rights, including the LGBTQ community.

Their first victory was a 1996 ruling, Romer v. Evans, overturning laws around the country that made gay sex a crime[19].

A series of similar victories based on the equal protection clause followed, all written by Justice Anthony Kennedy, a conservative Republican appointee. Those decisions culminated in the 2015 landmark ruling Obergefell v. Hodges[20], where the Supreme Court ruled in favor of marriage equality, expanding the application of the 14th Amendment’s equal protection clause to cover LGBTQ persons, by requiring all states to recognize same-sex marriages that were performed in other states.

Justice Kennedy’s opinion[21], which extols the virtues of marriage, states that “It would misunderstand these men and women to say they disrespect the idea of marriage… They ask for equal dignity in the eyes of the law. The Constitution grants that right.”

In 2020, the Bostock v. Clayton County[22] decision, which banned employment discrimination against LGBTQ workers, used a similar analysis. Even though it was based on Title VII of the 1964 Civil Rights Act, as a legal scholar[23], I believe the language used by Trump appointee Justice Neil Gorsuch, who wrote the court’s majority opinion, comes straight out of the RBG playbook.

Gorsuch wrote[24]: “Those who adopted the Civil Rights Act might not have anticipated their work would lead to this particular result. … But the limits of the drafters’ imagination supply no reason to ignore the law’s demands … Only the written word is the law, and all persons are entitled to its benefit.”

These advances were only possible because Ruth Bader Ginsburg paved the way for applying the equal protection clause beyond its original purpose, to promote equality for women.