The very first human beings originally emerged in Africa before spreading across Eurasia[1] about 60,000 years ago. After that, the story of humankind heads down many different paths, some more well-studied than others.

Eastern regions of Eurasia are home to approximately 2.3 billion people today – roughly 30% of the world’s population. Archaeologists know from fossils[2] and artifacts[3] that modern humans have occupied Southeast Asia for 60,000 years[4] and East Asia for 40,000 years.

But there’s a lot left to untangle. Who were the people who first came to these regions and eventually invented agriculture? Where did different populations come from? Which groups ended up predominant and which died out?

Ancient DNA is helping to answer some of these questions. By sequencing the genomes of people who lived many millennia ago, scientists like me[5] are starting to fill in the picture of how Asia was populated. 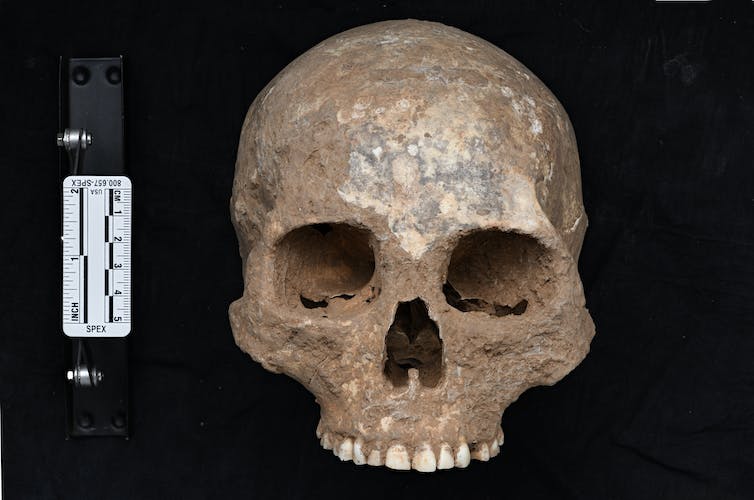 In 2016, I joined Dr. Qiaomei Fu’s Molecular Paleontology Lab at the Institute of Vertebrate Paleontology and Paleoanthropology, Chinese Academy of Sciences in Beijing. Our challenge: Resolve the history of humans in East Asia, with the help of collaborators who were long dead – ancient humans who lived up to tens of thousands of years ago in the region.

Members of the lab extracted and sequenced ancient DNA using human remains from archaeological sites. Then Dr. Fu and I used computational genomic tools to assess how their DNA related to that of previously sequenced ancient and present-day humans. 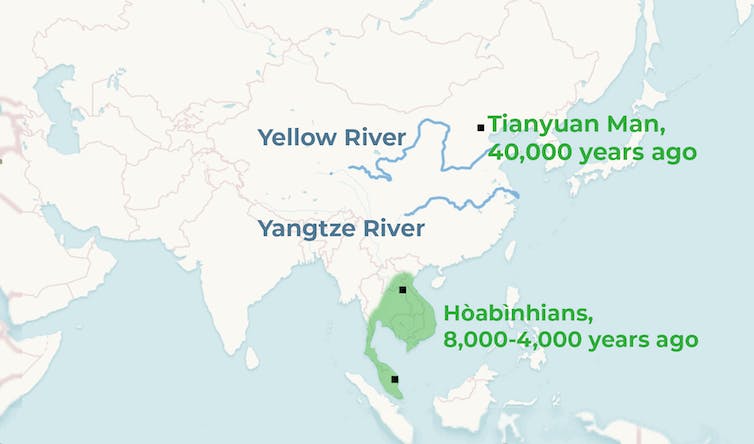 One of our sequences came from ancient DNA extracted from the leg bones[8] of the Tianyuan Man, a 40,000-year-old individual[9] discovered near a famous paleoanthropological site[10] in western Beijing. One of the earliest modern humans found in East Asia, his genetic sequence marks him as an early ancestor of today’s Asians and Native Americans. That he lived where China’s current capital stands indicates that the ancestors of today’s Asians began placing roots in East Asia as early as 40,000 years ago.

Farther south, two 8,000- to 4,000-year-old Southeast Asian hunter-gatherers[11] from Laos and Malaysia associated with the Hòabìnhian culture have DNA that, like the Tianyuan Man, shows they’re early ancestors of Asians and Native Americans. These two came from a completely different lineage than the Tianyuan Man, which suggested that many genetically distinct populations occupied Asia in the past.

But no humans today share the same genetic makeup as either Hòabìnhians or the Tianyuan Man, in both East and Southeast Asia. Why did ancestries that persisted for so long vanish from the gene pool of people alive now? Ancient farmers carry the key to that answer.

Unlike in Europe, plant domestication began locally and was not introduced from elsewhere. The process took thousands of years, and societies in East Asia grew increasingly complex, with the rise of the first dynasties[14] around 4,000 years ago. 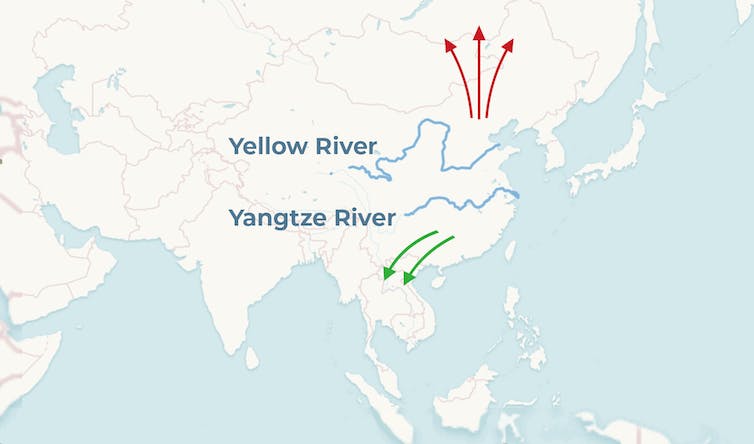 Rice farmers, possibly from around the Yangtze River, moved south into Southeast Asia, while millet farmers from around the Yellow River moved north into Siberia. Map © OpenStreetMap contributors, modified by The Conversation, CC BY-SA[15]

That’s also when rice cultivation appears to have spread from its origins to areas farther south, including lands that are today’s Southeast Asian countries. DNA helps tell the story. When rice farmers from southern China expanded southward, they introduced not only their farming technology but also their genetics to local populations of Southeast Asian hunter-gatherers.

The overpowering influx of their DNA ended up swamping the local gene pool. Today, little trace of hunter-gatherer ancestry[16] remains in the genes of people[17] who live in Southeast Asia. 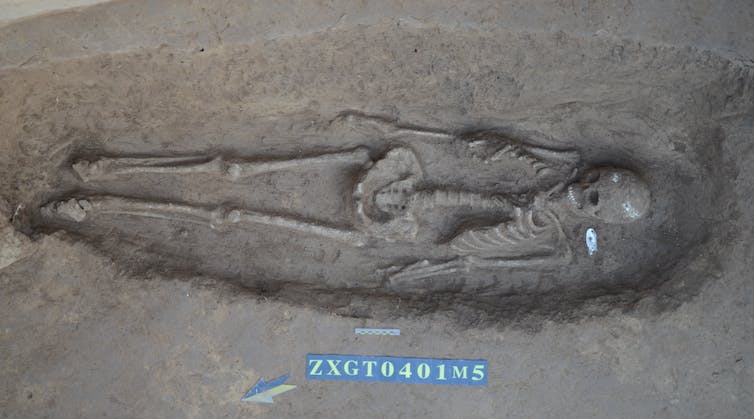 The skeleton of a person who lived about 8,700 years ago in Xiaogao, Shandong, China near the Yellow River. This individual’s northern East Asian ancestry can be found in the remains of people who lived up into the eastern steppes of Siberia. Jianfeng Lang, Shandong University, CC BY-ND[18] 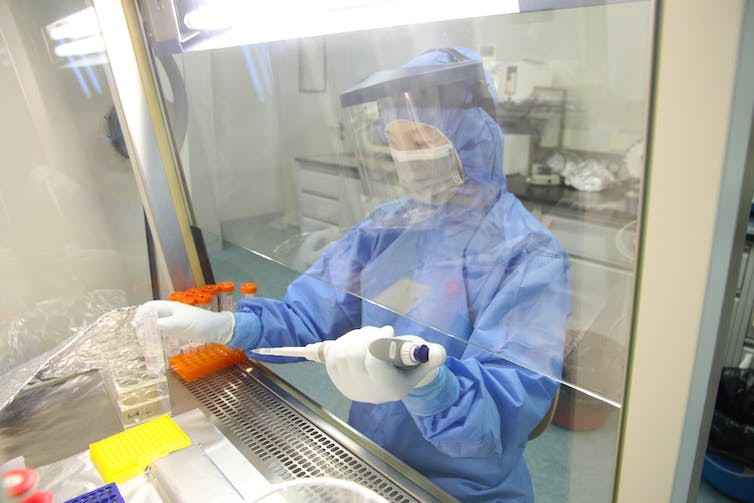 Past populations were more diverse than today’s

Genetically speaking, today’s East Asians are not very different from each other. A lot of DNA is needed to start genetically distinguishing between people with different cultural histories. 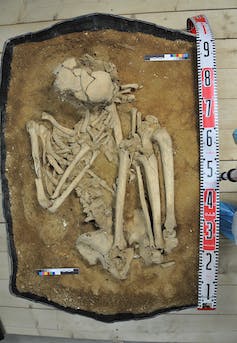 This individual, who lived about 8,300 years ago on Liang island in the Taiwan Strait, has the southern ancestry found in inhabitants of coastal mainland southern China. Hunglin Chiu, Institute of Anthropology, National Tsinghua University, CC BY-ND[21]

What surprised Dr. Fu and me was how different the DNA of various ancient populations were in China. We and[22] others[23] found shared DNA across the Yellow River region, a place important to the development of Chinese civilization. This shared DNA represents a northern East Asian ancestry, distinct from a southern East Asian ancestry we found in coastal southern China[24].

When we analyzed the DNA of people who lived in coastal southern China 9,000-8,500 years ago, we realized that already by then much of China shared a common heritage. Because their archaeology[25] and morphology[26] was different from that of the Yellow River farmers, we had thought these coastal people might come from a lineage not closely related to those first agricultural East Asians. Maybe this group’s ancestry would be similar to the Tianyuan Man or Hòabìnhians. 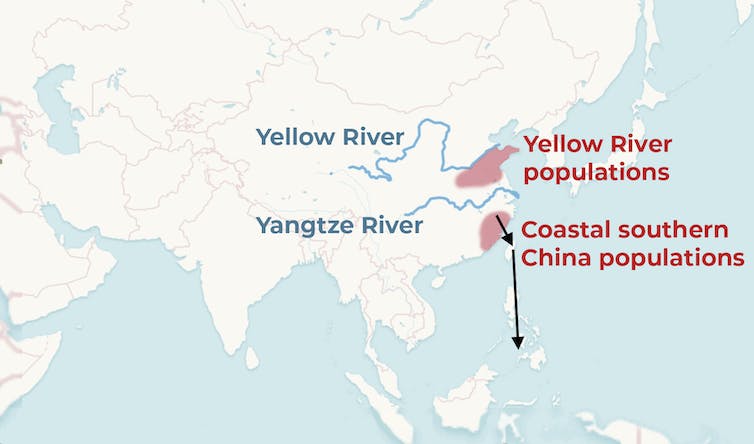 People with different lifestyles who lived far apart in northern China near the Yellow River and along the southern China coast as far back as 9,000 years ago both passed their distinct DNA down to present-day East Asians and Southeast Asians. Austronesians are the closest descendants of the ancient population from coastal southern China. Map © OpenStreetMap contributors, modified by The Conversation, CC BY-SA[27]

The coastal southern Chinese ancestry did not vanish, though. It persisted in small amounts and did increase in northern China’s Yellow River region over time[28]. The influence of ancient southern East Asians is low on the mainland, but they had a huge impact elsewhere. On islands spanning from the Taiwan Strait to Polynesia live the Austronesians[29], best known for their seafaring. They possess the highest amount of southern East Asian ancestry today[30], highlighting their ancestry’s roots in coastal southern China.

Other emerging[31] genetic patterns[32] show connections between Tibetans and ancient individuals from Mongolia and northern China, raising questions about the peopling of the Tibetan Plateau.

Ancient DNA reveals rapid shifts in ancestry over the last 10,000 years across Asia, likely due to migration and cultural exchange. Until more ancient human DNA is retrieved, scientists can only speculate as to exactly who, genetically speaking, lived in East Asia prior to that.

[Understand new developments in science, health and technology, each week. Subscribe to The Conversation’s science newsletter[33].]