Fishing has a strong impact on coastal marine food webs, but it’s a hard effect to measure. When Hurricane Harvey hit Texas in 2017, it temporarily halted fishing in one area of the Gulf Coast and set up a natural experiment for our team. We found that when the hurricane halted recreational fishing, populations of sport fish rebounded almost immediately, causing a cascade of effects throughout marine food webs in the area.

In August 2017, Hurricane Harvey made landfall in Aransas Bay, Texas[2]. The high winds and storm surge destroyed docks, piers and boats in addition to homes and businesses. With fishing infrastructure destroyed, fishing in this area declined significantly the following year[3].

The storm then moved north, dropping record setting rainfall[4] near Houston, Texas, in the Galveston Bay watershed. In both Aransas and Galveston bays, rainfall significantly reduced salinity and altered water quality. But, Galveston Bay was spared from the worst wind damage[5] and fishing continued as normal[6].

This set up a natural experiment: Fishing was reduced in one area – Aransas Bay – but not in another – Galveston Bay – allowing us to assess how the ecosystems recovered under high or low fishing pressure.

After the storm reduced fishing in Aransas Bay, populations of sport fish – many of which are top predators – boomed the next year and we saw a trophic cascade throughout the food web. With more predators around, populations of shrimp, crabs and smaller fish that sport fish commonly eat, all declined[7]. On oyster reefs, mud crabs that commonly eat small oysters were hard to find because of higher predation by fish.

Although Galveston Bay experienced similar rainfall and water conditions, very little fishing infrastructure was damaged, and fishing continued as normal after the storm passed. Sport fish populations remained steady, and we didn’t see any serious changes to the food webs[8] of Galveston Bay.

The hurricane, by curtailing fishing, showed just how much of an effect fishing has not only on the targeted species, but on entire food webs. 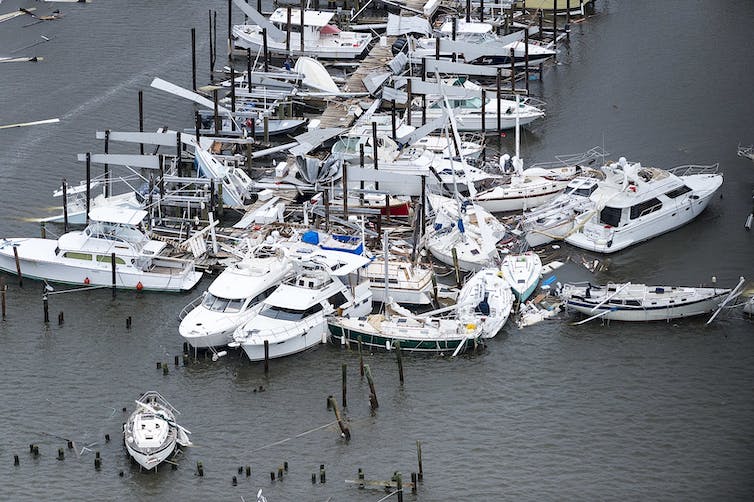 Harvey destroyed docks and boats and fishing infrastructure in Aransas Bay, but not Galveston Bay. U.S. Department of Defense via Wikipedia[9]

Researchers know that humans are important components of food webs, but measuring these effects is challenging. The hurricane occurred in the midst of ongoing studies on fish populations and afforded us a unique opportunity to measure its effects, including reduction of fishing.

In Texas, fish populations bounced back quickly after fishing activity ceased, suggesting that these fisheries are well managed and that fishing regulations are being followed. This is in stark contrast to many fish stocks that have been historically overfished, leading to collapse of coastal ecosystems[10]. The results highlight that science-based fishing regulations and conservation planning need to be maintained, as well as how important it is for fishermen to follow the rules. 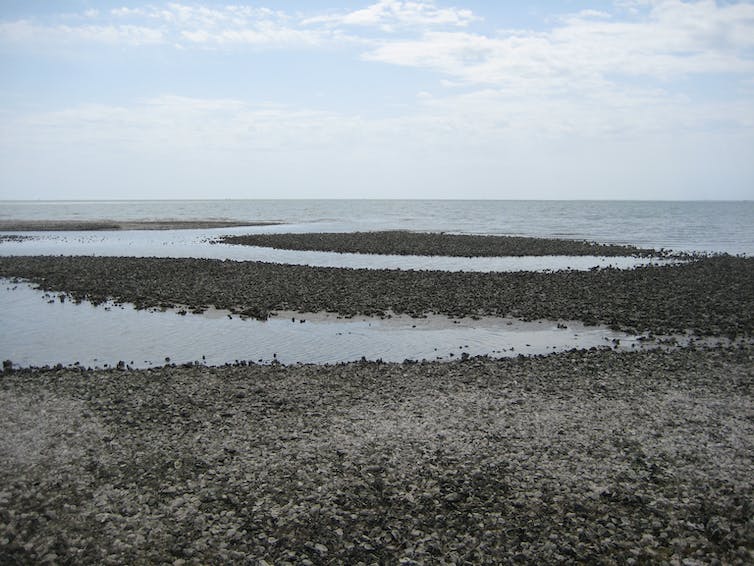 Oyster reefs are important habitats for a variety of species in the Gulf of Mexico and the food webs found on these reefs changed dramatically after fishing was reduced. Dr. Lee Smee, CC BY-ND[11]

The oceans face many challenges from fishing, pollution and climate change[12]. Food webs are inherently complex and difficult to study – especially when the conditions that affect them are constantly changing – and there is a lot scientists don’t yet know about how they might change with so many variables in flux. Understanding these relationships is critical if conservationists want to better protect marine resources.

Studies that examine how multiple factors affect individual species and the food webs they are a part of will improve conservation planning. We believe these studies should also investigate how changes to one species can affect not only other animals but plants and nonliving systems too. It is also important to study how these changes affect humans and vice versa.

Finding the right balance between the needs of people and the needs of healthy ecosystems is difficult but important work. Hurricane Harvey was destructive, but it gave us an opportunity to learn valuable information about these complicated systems.

[Deep knowledge, daily. Sign up for The Conversation’s newsletter[13].]