For most of the world’s 1.8 billion Muslims[1], the holy month of Ramadan has been spent in isolation this year, with mosques closed and communal meals canceled[2] due to the coronavirus. As Eid-al-fitr[3], which marks the end of Ramadan, draws near, many Muslim communities are holding virtual events starting May 23 to commemorate this religious festival.

Collective worship[4] is an important part of the Islamic tradition. During Ramadan, which commemorates Prophet Muhammad’s first Quranic revelation[5], those who are able fast from before dawn to sunset, pray and break fast together with celebratory meals called iftars. For many in the faith, the shift from in-person to online Ramadan[6] has been difficult.

For other Muslims, though, access to mosques was limited[7] well before the pandemic. Women often traditionally pray in separate – and, critics say, unequal[8] – sections of mosques, and some find child care duties and cooking typically keep them at home for holidays.

For these women, a “remote Ramadan” may be nothing out of the ordinary.

A difficult Ramadan is nothing new

I study Muslim women in non-Muslim majority countries[9], and I’ve been investigating their experiences of a Ramadan celebrated almost entirely at home.

In collaboration with a colleague who also studies gender and Islam, Joanna Krotofil[10] of Poland’s Jagiellonian University, I created an anonymous survey with open-ended questions[11] about religious practices and rituals, self-care, relationships with family and friends and online activities this Ramadan, and distributed it to Muslim women on social media and in our professional networks.

We received 38 responses, from women ranging in age from 22 to 57 and representing diverse Islamic traditions – Sunni, Shia, Sufi, Orthodox and others. Most respondents live in the United States, Poland and the United Kingdom, but five come from elsewhere.

Like their backgrounds, the women’s perceptions of this year’s remote Ramadan varied widely.

Some felt that social isolation during the holiday was entirely familiar. One woman commented she was usually “too busy with working and having a large family to be involved in the wider Muslim community.”

“Not much has changed,” another respondent wrote. “I am generally not attending the mosque due to feeling constrained there, as a second class citizen.”

Such responses reflect the lack of well-provisioned, comfortable women’s spaces in many mosques and the scarcity of women in mosque leadership positions[12]. Several “inclusive mosques” in the U.S. – including Chicago’s Al-Rabia[13] and the Women’s Mosque of America[14] in Los Angeles – welcome not only women but also LGBTQ Muslims into their ranks, including in leadership positions. But such attitudes are rare[15].

As a result, we found, many welcome this year’s shift away from traditional mosque worship and services. The sudden proliferation of virtual events actually brings more opportunities to participate.

That’s true for Muslims whose disabilities prevent them from leaving home, too.

“Often I can’t attend [events] due to disability,” one woman wrote. “Now that everything is online, it’s great.”

For Muslim women engaged with their faith communities, however, celebrating Ramadan during a pandemic has been frustrating.

“I’m used to attending my place of prayer about twice a week and having community events on top of that, so having to resort to online worship has been quite a jarring shift,” one woman wrote.

“It has been a struggle,” another responded, saying “it just doesn’t really feel like Ramadan.”

She added that holiday plans made months ahead of time are now scrambled. She’s been “rethinking everything we want to do and if it is possible during this time of quarantine.” 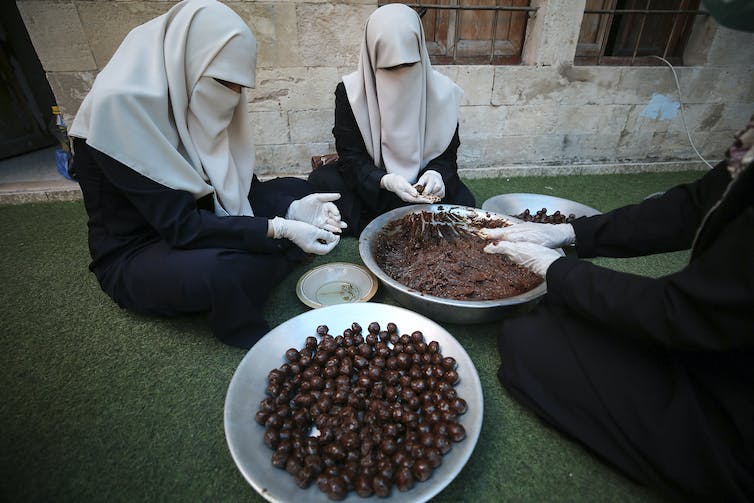 Trans and queer Muslim women and converts to Islam[17] – groups that often report feeling unwelcome[18] in traditional congregations – are accustomed to challenges in celebrating their faith.

“Unfortunately, I’ve never had any sort of physical community to be a part of because I’m transgender,” another respondent wrote. “Online is my only means of really connecting to the Muslim community.”

Some are trying to create an inclusive digital community in this isolating time. One respondent said that when the pandemic struck, she created a “virtual mosque” for other queer and nonbinary Muslims, featuring daily prayer, Quran readings and classes.

And the #inclusiveAzaan[19] initiative, started by the group Feminist Islamic Troublemakers of North America, has been streaming the Azaan, or Adhan – the Islamic call to prayer – delivered by trans women, queer women, converts to Islam and American Sign Language speakers. 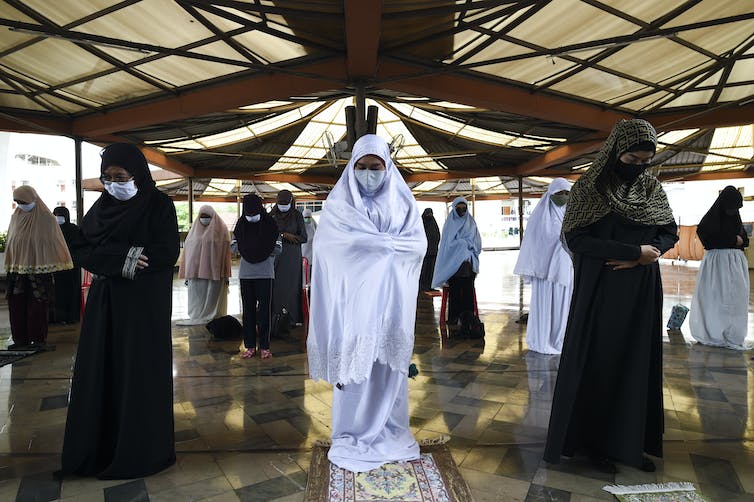 Eid, the three-day feast celebrated by Muslims worldwide at Ramadan’s end, is usually a large, convivial celebration with mountains of food. Observing it privately is almost without historic precedent[21].

Yet several of our respondents said solitude has enhanced their spiritual experience.

“I’ve discovered that I love to pray alone,” another woman said. “I can tap deep into my emotions.”

Several respondents found iftar, the communal supper eaten after sunset to break the Ramadan fast, more spiritually satisfying in quarantine. Ramadan is about strengthening one’s connection with God, a goal that can sometimes get lost amid all the organizing and “small talk” with strangers.

“Part of me does think that Ramadan is meant to be much more quiet,” one woman wrote. “Being under lockdown kind of forces that aspect of Ramadan” to the fore.

The wide range of views women expressed in our survey makes sense. Islam is the world’s second largest religion, and Muslims make up a majority of the population in 49 countries[22] with varied cultural norms.

Our survey captures just a tiny slice of this population. But it displays Muslim communities’ divergent interpretations of Islamic prescriptions about women and gender relations[23].

If there’s a throughline in the data, it’s that a woman’s perspective on “remote Ramadan” largely depends on her public participation in the faith during normal times.

Those deeply engaged with their mosques are dispirited by the loss of physical congregations. For others, Ramadan under quarantine feels like more of the same.

[Expertise in your inbox. Sign up for The Conversation’s newsletter and get a digest of academic takes on today’s news, every day.[24]]