There’s nothing like a worldwide pandemic and its incessant media coverage to get you ruminating on the fragility of life. And those thoughts of death triggered by the coronavirus amplify the best and worst in people.

The results of this psychological phenomenon are all around: people hoarding toilet paper and hand sanitizer[1], hurling ethnic slurs and attacking Asian Americans[2], heaping praise or scorn on President Trump, hailing new political and health care heroes. Sheltering at home has drawn some families closer together[3], but is a crucible of domestic[4] violence for others[5]. For many, social distancing has increased feelings of isolation[6], boredom, anxiety[7] and despair[8].

What’s behind these attitudinal and behavioral shifts?

Back in 1986[9], we first[10] developed an idea[11] called terror management theory[12] that explains how people double down on their essential beliefs, without even noticing, when confronted with their own mortality.

Hundreds of psychology experiments from the past 30 years have explored how people react to the thought of their own death. These reminders bolster people’s core worldviews[13], making racists[14] more hateful[15], the religious more devout[16], the charitable more giving[17] and constituents more suportive of charismatic leaders[18].

At a moment when the idea of death is front and center for many people, this psychological tendency has important implications for everything from how grocery store cashiers are treated to how people will vote in the upcoming presidential election.

Life ultimately has the same ending for everyone. Elizabeth Jamieson/Unsplash, CC BY[19][20]

No one gets out alive

Terror management theory[21] acknowledges that human beings are animals biologically predisposed to try to survive. But at the same time, people also realize how dangerous the world is, how vulnerable we are and that ultimately the quest for continued existence is doomed to fail.

Knowing that we will all die, and it can happen at any time, can give rise to potentially paralyzing terror. To manage this fear, people work to see themselves as valuable contributors to a meaningful universe. Viewing yourself as an important worker, entrepreneur, teacher, artist, scientist, lawyer, doctor, parent, spouse and so forth allows you to feel like you’re not just a material creature who will disappear upon death.

Rather than dwelling on that disturbing thought, you can believe in things like immortal souls, in your offspring carrying on your genes and values or in your work having an enduring impact. It’s comforting to believe that some part of you will continue after death, through your connections to your family, profession, religion or nation.

Thoughts of death lead people to cling more tightly to these soothing beliefs. Such thoughts can be triggered by simply reading a news story about a murder[22], being reminded of 9/11[23] or even glancing at a funeral home sign[24].

Death reminders first trigger immediate, front-line defenses – you want to feel safe by getting death out of your mind right away. Then subconscious downstream defenses work to fortify the protective bubble of the symbolic reality you believe in. Researchers have found that these downstream defenses include more punitive reactions to criminals[25], increased rewards for heroes, prejudice toward other religions and countries[26] and allegiance to charismatic politicians[27]. 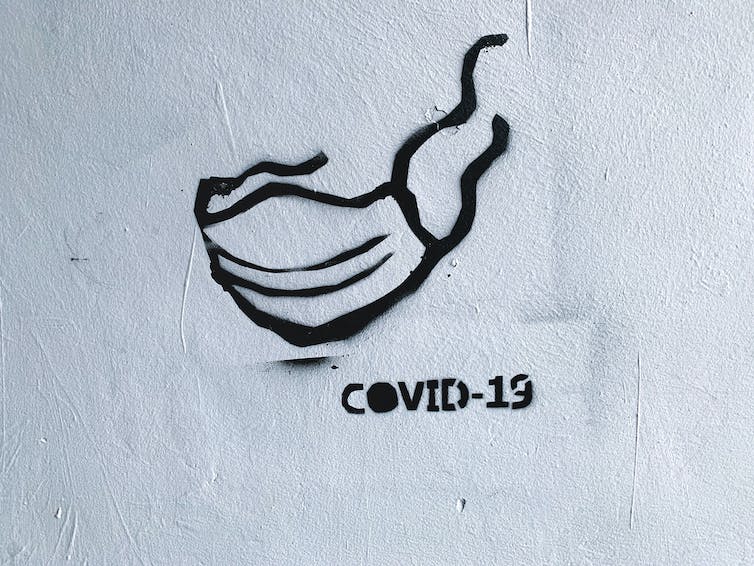 Because of the coronavirus, death reminders are all around. Front-line reactions range from efforts to shelter at home, maintain social distancing and wash hands frequently to dismissing the threat by comparing it to the flu or calling it a political hoax meant to undermine the economy and thwart President Trump’s reelection effort.

People who are more optimistic about their coping skills and have confidence in health care providers are prone to react constructively[30]. They typically follow the recommendations of health care experts.

But people prone to pessimism and skepticism regarding health care authorities[31] are more likely to deny the threat, ignore recommendations and react hostilely to expert advice.

These first-tier defenses banish death thoughts from consciousness, but do not eliminate their influence. Instead the thoughts linger just outside your attention, triggering downstream defenses that reinforce your valuable place in your world.

One way to enhance your value is through contributing to and identifying with heroic efforts to defeat this threat. That can happen via your own behavior and by lauding those leading the charge, such as first responders, health care workers, scientists and political leaders. Even those who inhabit social roles not usually given their due are recognized as heroes: grocery cashiers, pharmacists and sanitation workers. 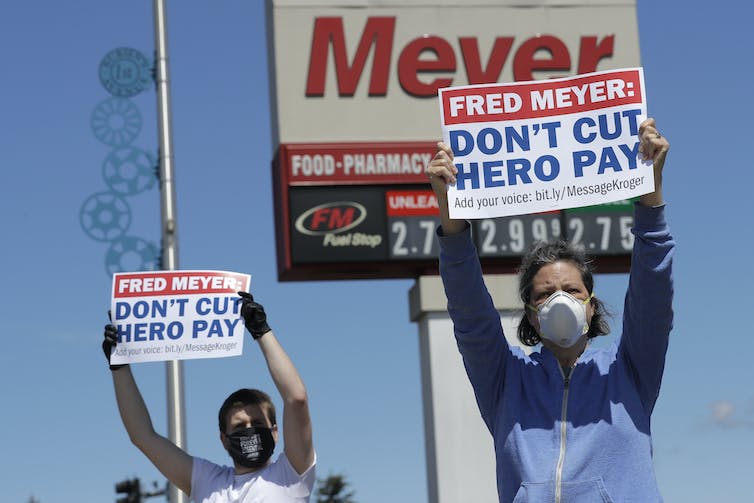 At the same time, many people question their value more[33] because of the pandemic. Earning a living to provide for one’s family and connecting with others are fundamental ways to feel valuable. Pragmatic health and economic concerns[34] and impoverished social connections[35] can combine to threaten those feelings of meaning and value. In turn they can increase levels of anxiety[36], depression and mental health problems.

At the same time, people also seek to assign blame[43]. Some turn their fear and frustration about the coronavirus that first emerged in China into hate toward Asians and Asian Americans. Others, depending on their political leanings, blame the World Health Organization, the mainstream media, or President Trump.

Even if the coronavirus abates, thoughts of mortality will linger on the fringes of consciousness as the November election approaches. If President Trump is perceived as a heroic wartime president who got the country through the worst of this invisible enemy, such death reminders could work to his advantage[44].

If, however, the president is viewed as an incompetent bungler responsible for the virus spreading and the economy collapsing, the same death reminders could undermine his chances.

We’re all in this together

If you’re interested in trying to short-circuit some of these unconscious defenses, our research[45] suggests a few promising possibilities. Maybe the best approach is to consciously acknowledge your mortal fears. By doing so, you can gain some reasoned control over their influence on your judgments and behavior.

We also suggest keeping in mind that all human beings are one interdependent species sharing the same planet. Recognizing that the coronavirus poses the same existential threat for all of us helps underscore that humanity is a group we all belong to. It’s by working together and not turning on each other that we will be able to recover our economic, physical and psychological vitality.

[Insight, in your inbox each day. You can get it with The Conversation’s email newsletter[46].]