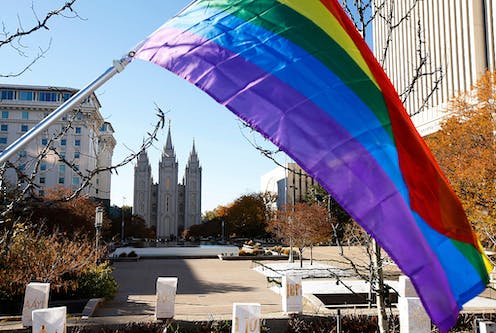 It can be difficult to imagine two identities more conflicting than being queer and Mormon.

The Church of Jesus Christ of Latter-day Saints, often called the LDS or Mormon church, teaches that[1] heterosexual marriage and binary gender roles are divinely dictated. Prophets and other leaders previously taught that queerness was a sinful condition that could be cured[2], although today the church tells members “a change in attraction should not be expected or demanded[3].”

LGBTQ people face similar challenges in a variety of religious traditions. Yet there are unique aspects of LDS doctrine, particularly how it emphasizes the importance of family, that intensify queer church members’ struggle to reconcile their identities and relationships. This can be especially challenging for one group not often discussed when issues about LGBTQ individuals and the LDS church make the news: asexual Latter-day Saints.

We are both communication researchers who study how cultural messages affect queer and transgender communities: One of us[4] researches the intersections of race and queer identities, while the other[5] focuses on queer and asexual issues within Mormonism.

Activists outside the General Conference of the Church of Jesus Christ of Latter-day Saints in 2019. George Frey/Getty Images[6]

People along the asexual spectrum[7] experience little to no sexual attraction. A common term for people who identify as asexual is “ace.”

Since asexuality is a spectrum, it’s important to note some ace folks still desire and form romantic and other intimate relationships[8]. Folks who do not experience romantic attraction – which is separate from sexual attraction – are known as aromantic, colloquially called “aro.” Ace and aro are usually represented as “A” in the popular acronym LGBTQIA+.

Because of the church’s emphasis on chastity – its own version of the “purity culture[9]” many Christian groups promote – some closeted ace teenagers may find themselves applauded, because avoiding sexual activity comes easily to them. Once in high school and college, however, religious pressure to date increases. Many young Latter-day Saints serve as missionaries[10] – men for two years, women for 18 months – and are often encouraged to get married soon after.

Church policies prohibit same-sex relationships[11] and gender-affirming care or transitioning[12] for transgender members. In contrast, leaders have not issued a specific policy against asexuality. Mormon scripture does, however, teach that heterosexual marriage is required to achieve “exaltation” in the highest level of heaven[13].

This teaching does not specifically discriminate against asexual church members, since some ace individuals desire marriage, while some non-asexual folks – commonly referred to as allosexual or zedsexual[14] – do not want marriage.

But LDS culture prioritizes dating and childbearing in unique ways. For example, in addition to scripture teaching marriage is required for heavenly exaltation, the current prophet, Russell Nelson, has said[15], “Every woman is a mother by virtue of her eternal divine destiny.”

Further, the church oversees “singles only” congregations known as singles wards[16] in many areas and encourages attendees to date. And while LDS childbirth rates are on the decline[17], members of the faith still have more children than their peers[18]. On average, middle-aged Latter-day Saints have had 3.4 kids, compared with the national average of 2.1.

Being ace in the church

One participant recalled[20] a missionary telling them that their lack of interest in sex or children “is proof that I’m apparently under demonic influence” and that their “asexuality is evidence of the devil working in my life.”

Yet other ace members feel more comfortable in church environments. For example, another participant said she has never “gotten that kind of pressure that other people get,” such as questions from leaders inquiring, “Who are you dating? When are you going to get married?”

These drastically different experiences can, in part, be connected to how congregations are run. Local wards do not have paid, formally trained clergy; instead, members volunteer[21] for various “callings,” such as teaching religious classes or serving as a bishop. This leads to local leaders having room to approach various challenges based on their personal preference, which some members refer to as “leadership roulette[22].” One bishop may approach issues around gender and sexuality differently than another.

Some ace Latter-day Saints also face difficulties due to religious messages shared by their families. In Brandley and Spencer’s research interviews,[23] most participants reported that their families did not discuss sex, or that when they did, they emphasized rejecting sexuality. As young people reached adulthood, it felt jarring for their families to suddenly start emphasizing the importance of having children.

Given these unique cultural and religious values around dating and marriage, many ace Latter-day Saints can feel stuck, lonely and even traumatized.

One ace participant shared how being raised in Utah LDS culture made her feel pressure to date in order to be the quintessential Mormon woman. She shared, “I forced myself into situations” that felt unsafe, and left wishing “I had listened to myself.”

Research suggests that some queer Latter-day Saints do try to embrace[24] both these aspects of their identities. There are signs in recent years that more leaders and members of the church, especially millennials, want to create more accepting congregations[25].

Yet for now, when queer Latter-day Saints feel welcomed and affirmed[26], it is in spite of the dominant interpretation of the church’s doctrine.

Many church members who describe themselves as experiencing same-sex attraction assert that they are not gay or queer, according to a 2019 psychology study[27]. Another study[28] found that 53% of queer LDS respondents had abandoned their religious identity, which may suggest how unwelcome they felt. And one doctoral dissertation[29] found that 86% of the LGBTQ Mormon respondents would likely meet the criteria to be diagnosed with PTSD.

The Latter-day Saints church preaches for its adherents to abandon prejudice[30] and have love for everyone. Yet embracing asexual people as they are, and embracing the kind of love that they experience, seems to be a challenge to that commitment.