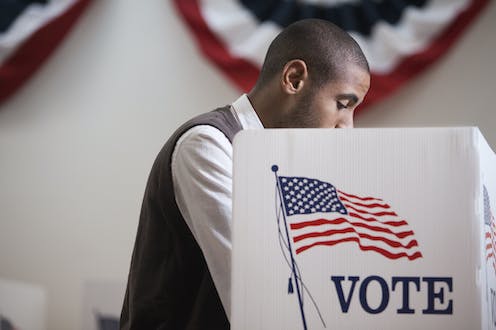 SciLine interviewed Jan Leighley[1], professor of government in the School of Public Affairs at American University in Washington, D.C., on Nov. 4, 2022. Leighley discussed how early voting affects turnout, how turnout differs for midterm and presidential elections, how pollsters predict turnout and how to understand the persistent gap between people’s intention to vote and actual turnout.

Below are some highlights from the discussion. Answers have been edited for brevity and clarity.

How do we know after an election how many people ultimately voted?

Jan Leighley: It’s usually January by the time we really have a good sense of how many people voted[2], and there can be corrections after that. Now those are usually small corrections. But it takes a lot of people a lot of time even to ensure that number is correct[3].

How do newer forms of voting, such as early voting or mail-in voting, affect turnout?

Jan Leighley: The assumption has always been if we make it easier to vote using these methods, more people will vote. (But) most research suggests that the people who take advantage of these newer ways of voting would have voted anyway on Election Day[4] if they weren’t able to vote in those other ways.

The original intention of those reforms was to get new people into the voting pool. We have a little bit of evidence that – under some circumstances – we can indeed increase turnout in the range of 2 percentage points or so[5].

But it depends on what parties do. It depends on the competitiveness of elections and other factors unique to specific elections.

How does turnout differ between midterm and presidential elections?

Jan Leighley: Presidential turnout is substantially higher than midterm elections[6], when members of Congress and a set of senators and governors might be up for re-election or election.

Turnout in presidential elections tends to be around 50% to 60%, depending on various circumstances associated with the election. Midterms are usually in the 30% to 40% range. Again, depending on candidates, competitiveness, economic conditions and what the parties do to try to mobilize turnout.

Does higher turnout mean better representation of the voter population?

Jan Leighley: The turnout level, which is what we hear about the most, isn’t the only feature that’s important. The other feature is whatever 50% or 30% of voters who do show up, who they are.

And so, low turnout levels – like 30%, if you believe that’s low – that are nonetheless representative of all eligible voters, wouldn’t necessarily be a problem for representation … if those 30% of voters were like that larger pool of everyone who’s eligible.

And, in fact, what we find in midterms compared to presidential elections is that one group – younger individuals – (are) especially underrepresented in midterms.

The sense is younger individuals who are getting established as voters and figuring out how to vote and deciding whether it’s a priority, they vote far less in midterms[7] than they do in presidential elections. And so that’s a voice that isn’t heard perhaps as strongly as you might hope.

How do pollsters predict voter turnout?

Jan Leighley: Pollsters predict voter turnout using a variety of means[8]. They have extensive databases on past turnout behavior of citizens, and they use past behavior to predict what will happen in the current environment. (The pollsters) connect those historical details with the current environments and attitudes of their potential voters to predict what voter turnout will look like.

What drives the persistent gap between people’s intentions to vote and their actions?

Jan Leighley: I think voting is like a lot of things that we have good intentions to do, right? It takes time, it takes effort, it takes presence of mind, and life is complicated. And, oftentimes, the short-term, immediate, right-in-front-of-our-faces issues or problems or tasks take precedence.

Watch the full interview[9] to hear about voter turnout.

SciLine[10] is a free service based at the nonprofit American Association for the Advancement of Science that helps journalists include scientific evidence and experts in their news stories.