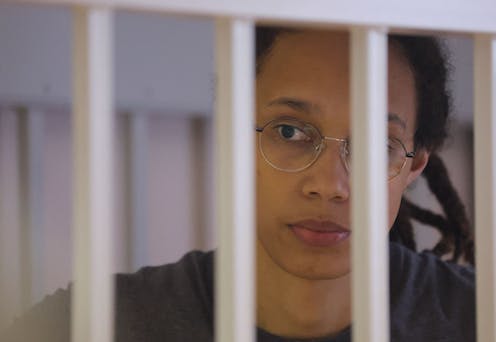 The sentencing of WNBA star Brittney Griner[1] to nine years behind bars and a fine of 1 million rubles – between US$10,000 and $20,000 depending on the exchange rate – should come as no surprise to those familiar with Russian law.

The country has long enforced strict drug laws[2] and has a well-deserved reputation for zero-tolerance jurisdiction.

Indeed, the crime Griner was prosecuted of – smuggling narcotics in “significant amount” in violation of Article 229¹(2)(c) of the Russian criminal code[3] – carries a minimum sentence of five to 10 years “deprivation of freedom” along with the fine, and the upper end of the spectrum seems to be common. The prosecutor in Griner’s case asked for 9 ½ years and, presumably, the maximum fine. He got most of what he wanted.

The backdrop of the case – worsening ties between Moscow and the Washington[4] – may lead some observers to wonder if Griner was handed an unduly harsh sentence[5] to up her worth as a bargaining chip during discussions over a potential prisoner swap[6]. U.S. President Joe Biden responded to the announcement of Griner’s sentence by denouncing the verdict[7] and sentence as “unacceptable.”

But as longtime scholar of Russian law[8], I can say the sentence announced in the Khimki District Court outside Moscow on Aug. 4, 2022, is more or less in line with what was expected. Moreover, I believe the sentence itself does little to change the equation when it comes to any quid pro quo with Russia regarding the potential exchange of detained nationals – any negotiation over her fate will now take place outside the courtroom.

The facts of the case

Griner was detained at Sheremetyevo Airport[9] on Feb. 17, 2022, after a sniffer dog detected vaping cartridges containing hashish oil in her luggage. The Russian Criminal procedure code[10] provided that Griner, as a foreigner with no permanent residence in Russia, was ineligible for bail.

The length of time Griner spent in detention after her arrest – nearly six months – is not unusual in drug cases of this nature in Russia and will be counted toward her sentence. And aside from the heightened international interest, the trial seemingly played out in line with Russian criminal procedure[11].

Under the Russian criminal procedure code, there are no “pleas”; prosecutors have to prove guilt regardless of any confession. And the evidence was there in the shape of the vape cartridges seized by customs officials along with witness statements.

In court, Griner acknowledged guilt[12] and apologized for what she described as a mistake when packing her luggage. Her lawyers said that Griner’s cannabis oil was for medical purposes[13], to deal with chronic pain resulting from injuries sustained during her playing career. Griner, meanwhile, testified that she had no intention to break the law.

But in line with other jurisdictions, including the U.S., ignorance of the laws is no defense in Russia.

A pawn in US-Russian diplomacy?

If the fate of Griner was set the moment she was caught with an illegal drug in a Moscow airport, her future is less certain.

Griner has 10 days to appeal. The appeal will probably be heard rather rapidly, as standard Russian practice is to do so, but that also depends on the grounds of the appeal. If unsuccessful or unsatisfactory, additional appeals by way of cassation on issues of law may be heard at the discretion of the higher court, assuming grounds exist for this.

If all appeals fail, Griner’s lawyers can apply to a presidential commission for a pardon or hope for amnesty.

Given that Griner is being discussed in the context of a possible prisoner swap, it seems unlikely that the Kremlin will set Griner free without a reciprocal move from the U.S. government.

But Griner’s currency as a pawn in U.S.-Russian relations[14], with Moscow seemingly willing to barter[15] over the future of the high-profile prisoner, will likely change little as a result of her sentence. To many in the U.S., nine years’ imprisonment may seem like a harsh penalty for cannabis possession. But in Russia, it is par for the course for this crime.